Kyiv says that pro-Russian separatists have shot down a Ukrainian military helicopter near the eastern city of Slavyansk. Rebels in the area claim to be holding four observers of the European security body OSCE. 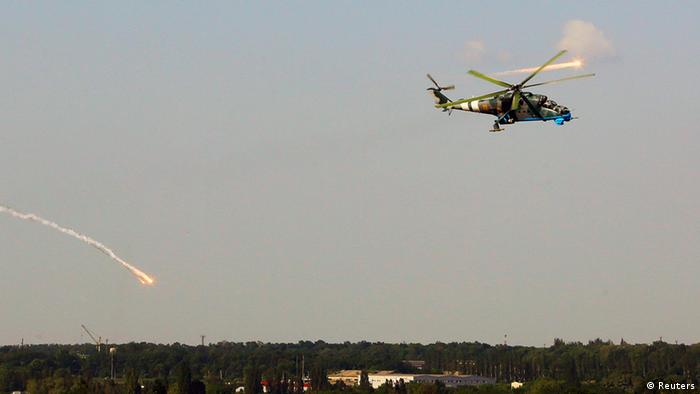 Ukraine's interim president Oleksander Turchynov told parliament in Kyiv on Thursday that pro-Russian separatists had shot down a Ukrainian military helicopter, killing 14 people on board, including a general.

"I have just received information that terrorists using Russian anti-aircraft missiles shot down our helicopter near Slovyansk. It had been ferrying servicemen for a change of duty," Turchynov said.

Hours earlier, the Russian news agency Interfax had quoted Vyacheslav Ponomarev - the rebel "mayor" of Slovyansk - as saying his fighters had detained four international observers who went missing on Monday.

That's when the Vienna-based Organization for Security and Cooperation in Europe (OSCE) lost contact with its team - a Dane, a Turk, an Estonian and a Swiss national - while they were monitoring restive eastern Ukraine.

Interfax quoted Ponomarev (pictured) as saying that his fighters had "told them not to travel anywhere for a time but these four turned out to be very keen."

"Of course they were detained," he said. "The group of four people who went missing south of Donetsk -- we know where they are. They are all fine."

"We are now clarifying who they are, where they were going and why and will set them free," Ponomarev said.

On Wednesday night, the OSCE's Swiss president Didier Burkhalter had slammed the detentions, describing such acts as "sabotage of international effort to assist Ukraine in overcoming the crisis."

Burkhalter called for the team's immediate and unconditional release, adding that detentions of OSCE monitors "cannot be tolerated."

On Wednesday, the self-declared Donetsk People's Republic said that it had nothing to do with the observers' disappearance. Donetsk lies about 90 kilometers (55 miles) south of Slovyansk.

On Wednesday, a second group of 11 OSCE observers was detained in the Donetsk region but the body later said it had managed to re-establish contact with them.

On Monday and Tuesday, forces of Ukraine's Kyiv-based interim government said they had evicted rebels who had briefly seized Donetsk's airport. At least 36 people were killed, mostly rebels, according to multiple reports.

Ukraine's president-elect Petro Poroshenko vowed on Wednesday to crush the rebellion in eastern Ukraine and added that he would seek a new security pact with the US and Europe to protect Ukraine militarily.

At the United Nations, Russia's ambassador Vitaly Churkin urged members of the UN Security Council to call on Ukraine's Kyiv administration to end what he called the "military chaos" in eastern Ukraine.

It was very difficult to talk about dialog "when you're killing people," Churkin said.

Ukraine's ambassador Yuriy Sergeyev urged the council to press Russia to ensure the departure from eastern Ukraine of what he said were hundreds of Chechens, Cossacks and mercenaries.

Russian Foreign Minister Sergei Lavrov on Wednesday reaffirmed that Russia would respect Poroshenko's election by Ukrainian voters on Sunday, but added there was "no justification" for Kyiv's "provocative" actions in eastern Ukraine.