The Defense Ministry wants female soldiers to march in mid-heel black pumps to mark 30 years of independence. Several MPs have slammed the move as sexist and misogynistic. 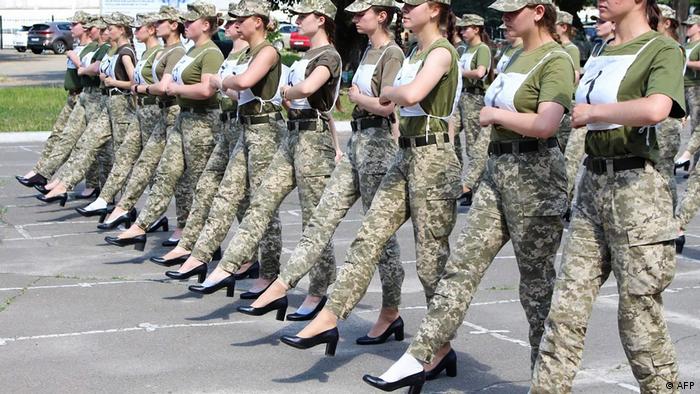 "It is hard to imagine a more idiotic, harmful idea," said one female Ukrainian politician

Ukrainian authorities have come under fire after the country's defense ministry released official pictures of female soldiers practicing for next month's military parade wearing heels instead of army boots.

The photos, published on the ministry's Facebook page, show the female students of a military college, marching in uniform and black medium-heeled pumps.

Ukraine is preparing to stage a parade to commemorate 30 years of independence following the collapse of the Soviet Union.

"It is slightly harder than in army boots but we are trying," Medvid added.

The choice of footwear has triggered outrage across social media platforms and within parliament.

Iryna Gerashchenko, an opposition MP, called the decision an example of "sexism and misogyny."

"High heels is a mockery of women imposed by the beauty industry," she fumed.

"It is hard to imagine a more idiotic, harmful idea," she said, adding that female soldiers in Ukraine, like men, were risking their lives and "do not deserve to be mocked."

"The story of a parade in heels is a real disgrace," she said on Facebook.

Deputy parliamentary speaker Olena Kondratyuk said over 13,500 women had fought in the Ukraine-Russia conflict where Russian separatists and Ukraine government troops are fighting in the eastern Donbass region.

More than 31,000 women currently serve in Ukraine's armed forces and more than 4,000 women are officers.