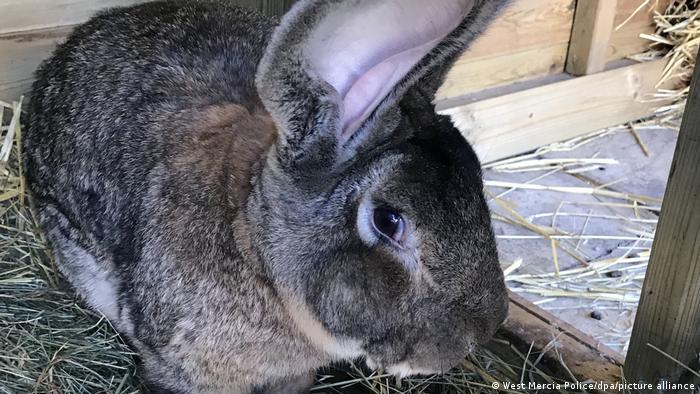 Who has seen Darius? He is 129 centimeters long, weighs about 20 kilograms (51 inches and 44 pounds). He also likes carrots, has long ears ... and is the world's longest rabbit.

Police have said the animal was stolen from his owner's garden enclosure on Sunday night. Investigators in the village of Stoulton in central England are hoping for clues.

On Monday,  West Mercia Police asked the public for "information following the theft of an award-winning rabbit from its home."

The looming question — the number of suspects — was not addresed, as details of the investigation remain undisclosed.

The giant rabbit is recognized by Guinness World Records as being the longest alive.

His owner, Annette Edwards, took things into her own hands in offering a £1,000 (€1,155) reward on Twitter. She wrote that Darius was now too old to breed, and pleaded for the thieves to bring him back.

The 68-year-old owns seven other rabbits. After she retired from modeling in 2004, she took up dog and rabbit breeding.

Darius' offspring hopped into the Guinness World Records book — for having the longest tail in the world. She might even outgrow her dad, as Edwards told the Sun:

Mysterious death on US flight

Two years ago, Annette was left devastated after one of her rabbits mysteriously died while on a flight to the US.

Three-foot Simon, who was set to take over dad Darius’ crown as the world's biggest bunny, perished in the cargo section of a United Airlines Boeing 767 after leaving Heathrow for a new celebrity owner.

Continental Giants, which cost circa £5,000 per year to keep, date back to the 16th century, when they were bred for meat and fur.