In his first public speech as Chancellor of the Exchequer, Philip Hammond has said that access to the EU single market must be ensured for all financial services. The UK's impending Brexit puts its membership at risk. 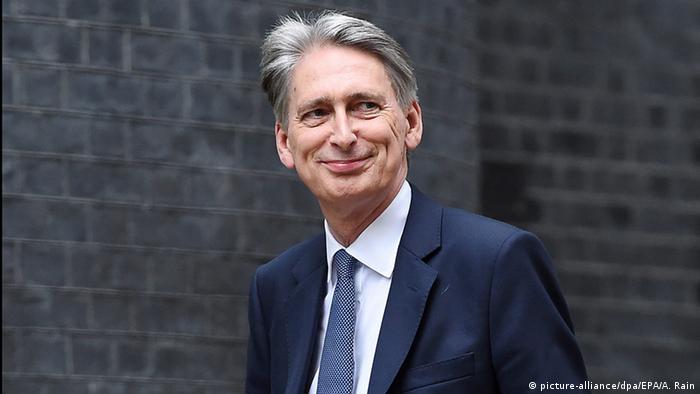 Britain's newly appointed Finance Minister Philip Hammond said on Thursday that he would do whatever is necessary to steady the UK economy and give confidence to the financial marketsafter Britons voted in favor of leaving the European Union (EU).

"Markets do need signals of reassurance; they need to know that we will do whatever is necessary to keep the economy on track," the Chancellor of the Exchequer, Philip Hammond, told British commercial broadcaster ITV.

Speaking to various media outlets, Hammond insisted, however, that there would be no emergency budget.

"The prime minister made clear we will do an Autumn Statement in the usual way, in the autumn, and we will look carefully over the summer at the situation," he told Sky News.

In a later interview with BBC radio, Hammond said the UK might also consider the pace of its deficit reduction, arguing that the economy was in need of a less aggressive approach to that of his predecessor George Osborne.

After taking office in 2010, Osborne aimed to turn the UK's budget deficit, which currently stands at around 4 percent of the GDP, into a surplus by 2020. The former chancellor recently abandoned the target, however, due to the expected hit to the UK's economy following the impending Brexit.

"What we did in 2010 was exactly the right approach for the challenges that faced the British economy then," Hammond said on Thursday.

"But now we're entering a new phase in the story of the British economy with the decision to leave the European Union; our economy will change as we go forward in the future, and it will require a different set of parameters to make a success," he said.

Hammond was due later on Thursday to meet with Bank of England (BoE) Governor Mark Carney to further assess the UK's economic situation.

The meeting comes as the BoE prepares to announce whether its main interest rate will be cut to a new record low to under 0.5 percent in a bid to cure the economic fallout with Britain.

Following the UK's decision to vote to leave the EU on June 23, the British pound slumped to a 31-year low against the US dollar, before recovering slightly over the past three weeks.