The UK is withdrawing patrol ships from overseas to deal with a surge in crossings of the English Channel. Opposition politicians accuse the government of pumping up the issue for political gain. 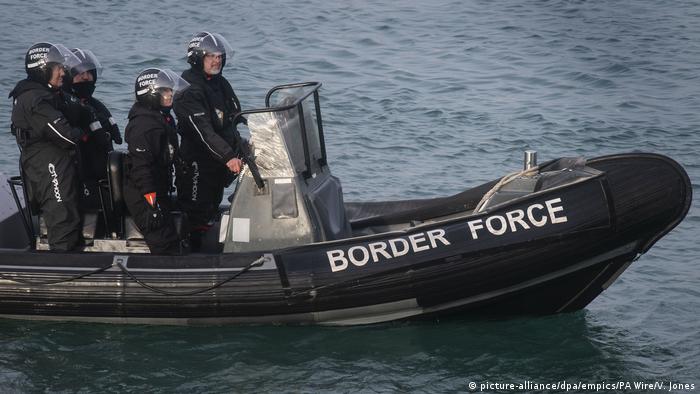 Britain will recall two overseas border patrol boats in response to a spike in migrants attempting to cross the English Channel in dinghies, it announced on Monday.

"I have taken the decision to redeploy two Border Force vessels — known as cutters — which are currently based abroad to the UK," Home Secretary Sajid Javid said in a statement after a government crisis meeting on the issue. The boats will join three other vessels already patrolling the waters.

In 2018, 539 people attempted to migrate to the UK on small boats from France, according to the British Home Office, with 80 percent of those occuring the past three months. The majority of people came from Iran.

Most recently, police picked up a group of 12 people from a beach in southwestern England, including two women and a 10-year-old child.

The numbers pale in comparison to those attempting to reach mainland Europe via the Mediterranean, but the spike has attracted considerable attention in the UK just three months ahead of its planned departure from the European Union.

"I don't want people to think that if they leave a safe country like France, that they can get to Britain and just get to stay," Javid said. He said he hopes to work with France to return as many of the migrants as possible and stop future crossings.

Shadow home secretary Diane Abbott accused the Conservatives of leveraging the spike to improve the chances of their Brexit deal passing a vote.

"People are being whipped up about migration issues, because the government thinks this is the best way of frightening people to vote for their deal," she said in comments carried by The Guardian on Monday. Javid is seen as a potential successor for replacing Theresa May as leader of the Conservative Party.

The waters between England and France are particularly dangerous due to high seas and busy shipping lanes.

The migrants, including two children, were picked up around 5:00 a.m. just a few kilometers off the French port of Boulogne. Authorities spotted the boat sailing with its lights off, making an unusual trajectory. (23.12.2018)