A top commander from the notorious Lord's Resistance Army, which waged one of Africa's most brutal rebellions, has surrendered in Central African Republic. The ICC wants him on charges of crimes against humanity. 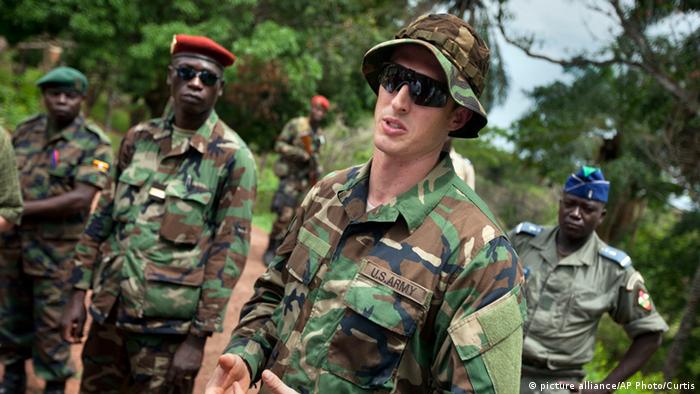 The Ugandan army has confirmed that a high-ranking commander of the rebel Lord's Resistance Army (LRA) has surrendered and is now in the custody of US forces.

Dominic Ongwen gave himself up to Seleka rebels in Central African Republic (CAR). They handed him over to US forces, according to Ugandan army spokesman Paddy Ankunda.

US military personnel in CAR are helping African troops hunt for LRA fighters and their warlord Joseph Kony, who is still at large. 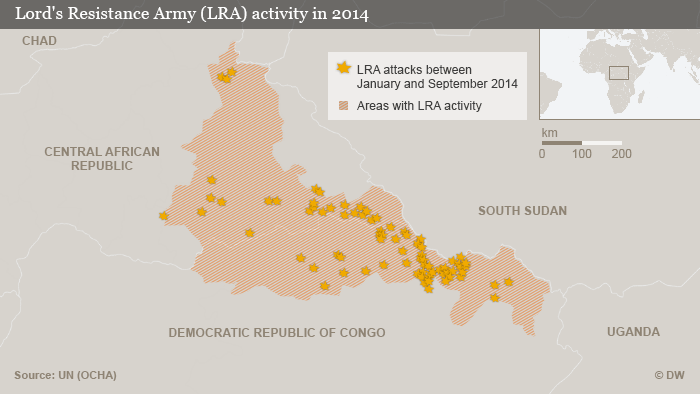 The UN reported a 'steady increase' in LRA abductions in 2014

There was no immediate word on what the Americans had done with Ongwen, who is wanted by the International Criminal Court (ICC) for crimes against humanity and war crimes.

He is accused of directing bloody campaigns in northern Uganda in the early 2000s in which thousands were killed or abducted to be used as child soldiers or sex slaves.

Uganda's Foreign Affairs Permanent Secretary, James Mugume, said a Ugandan legal team would consult with the ICC on whether the rebel commander should be moved to The Hague for trial or be tried at home.

DW's correspondent in Uganda, Alex Gitta, says the decision won't be an easy one. Uganda has standing arrangement by which rebels who surrender voluntarily are pardoned under an amnesty. However, Ongwen is a fugitive wanted by the ICC.

The LRA have been blamed for the slaughter of over 100,000 people and kidnapping of more than 60,000 children during a three decade-long campaign across five central African nations. 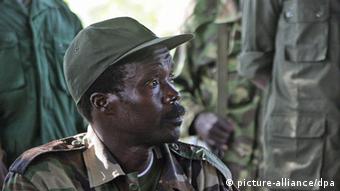 Joseph Kony has so far eluded capture. The LRA is blamed for some of the world's worst atrocities

Initially abducted by the LRA when he was a 10-year-old and forced to fight as a child soldier, Ongwen was quickly singled out for his murderous loyalty and tactical ability and rose rapidly through the rebel ranks, becoming a major at 18 and a brigadier by his late 20s. He is now in his mid-30s.

While the Ugandan army's spokesman expressed confidence that Ongwen's surrender "put the LRA in a most vulnerable position," others were more cautious.

Kristof Titeca from the Institute of Development Policy and Management at the University of Antwerp in Belgium told DW that Ongwen's surrender was an important event, but militarily, or structurally, not a very big blow to the LRA.

"The LRA has been operating in very fragmented groups and it seems that Ongwen himself was marginalized and also operating semi-independently of the LRA, so it's symbolically important, but militarily I'm not really sure," he said.

Long driven out of Uganda, small bands of LRA fighters now roam forest regions of CAR, DR Congo, Sudan and South Sudan. Kony, who claims mystical-religious powers, has long been reported to be based in the Sudanese-controlled Kafia Kingi enclave.

LRA victims have spoken of brutal initiation rituals, including biting and bludgeoning friends and relatives to death.

The Lord's Resistance Army (LRA) rebel group is led by Joseph Kony. It has been committing atrocities against civilians in parts of Africa for nearly three decades. The group claims to be fighting "in the name of God." (17.12.2014)

Slow progress in the fight against the LRA

The Lord's Resistance Army has been escalating its abductions in Central Africa, a new UN report says. Although AU-led military operations appear to be weakening the group, the countries involved have other priorities. (24.11.2014)

The US has agreed to deploy additional military assets to help African forces hunt down fugitive warlord Joseph Kony. He is wanted by the International Criminal Court (ICC) in The Hague for crimes against humanity. (24.03.2014)