After being driven out of Uganda, the Lord's Resistance Army ran riot in the Central African Republic, where it behaved more like a criminal gang than a terrorist militia. Now the LRA's days seem to be numbered. 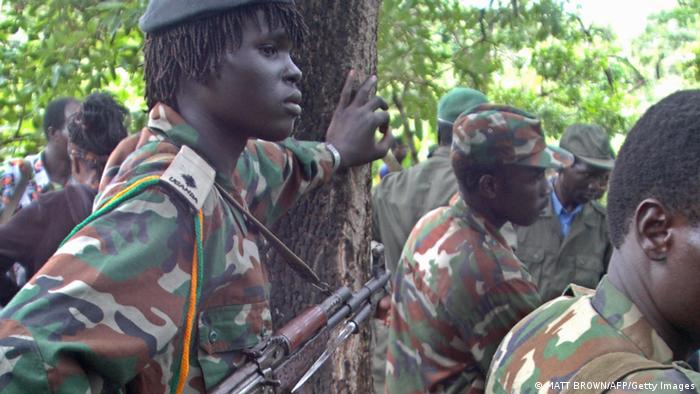 Ugandan Lord's Resistance Army fighters in a file photo of 2006

The Lord's Resistance Army (LRA) was founded in northern Uganda in 1987 to chase President Yoweri Museveni out of office and establish a Christian theocracy.

After being driven out of the country by the Ugandan military, LRA fighters instilled terror among the region's politically unstable neighbors — particularly in southern Sudan and present-day South Sudan, the northeastern Democratic Republic of Congo (DRC), and the southeastern Central African Republic (CAR).

"They came to the Central African Republic in 2008 and went on a rampage, especially in my home region of Haut Mbomou," recalled Ernest Mizedjo, who represents the country's far eastern communities in the parliament in the capital Bangui.

According to Mizedjo, the LRA committed many atrocities against civilians, especially in 2009, 2010 and 2011.

While the extent of atrocities committed by the LRA in the CAR is believed to be vast, he added, there are no official figures on the number of victims. 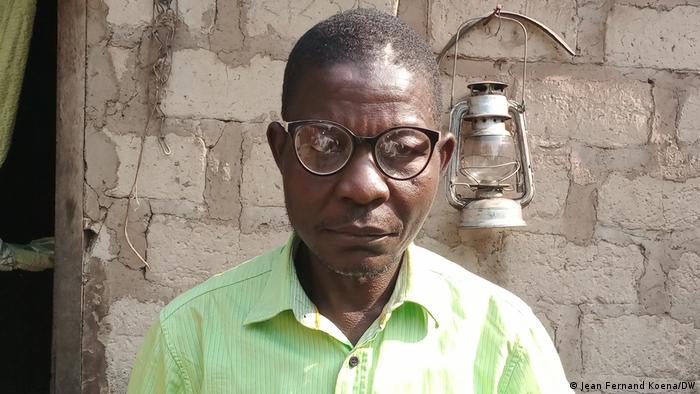 Aubin Kottokpinze was kidnapped and tortured by the LRA in 2008

According to the United Nations (UN), more than 100,000 people were killed by the LRA across several countries and regions. Between 60,000 and 100,000 children have been abducted, and many were misused as child soldiers. More than one million people were displaced as a direct consequence of the attacks.

52-year-old Aubin Kottokpinze, from Haut Mbomou is one of the victims. He told DW how he was captured by LRA fighters in 2008, at the age of 39.

"They kidnapped me, abused me and tortured me," he recalled. "It was a terrible experience, from which I never recovered. Look at me, I am only a shadow of my former self. I look much older today than I am."

Where is Joseph Kony?

The International Criminal Court (ICC), based in The Hague, issued an arrest warrant for the founder and leader of the LRA, Joseph Kony, in 2005.

Kony's whereabouts are currently unknown. For some time he was thought to be hiding in the border region of Kafia Kingi, between Sudan and South Sudan.

US agents, UN soldiers, an African Union task force and members of federal armies in countries where the LRA is active are all searching for the rebel leader. But so far, no one has managed to catch him. The Ugandan army did not even have a picture of Kony until 2000. 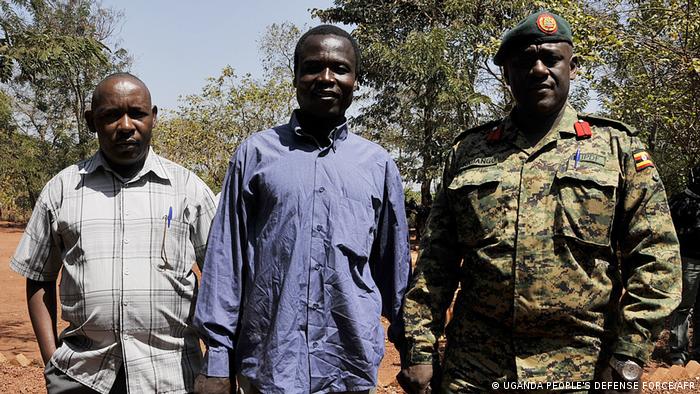 Detained in 2015 in the CAR, LRA leader Dominic Ongwen (center) was sentenced to 25 years by the ICC last year

"Nobody knows if Kony is still alive at all, or if the LRA fighters are still under his leadership, or whether the fighters are still held together by any kind of ideology," Adolphe Agenonga, an expert in geopolitics at the University of Kinsangani in DRC told DW. "What is certain is that the LRA is militarily very weak."

The former "army" now consists of splinter groups, he explained. The LRA is said to have only 200 to 1,000 fighters left in scattered groups, who presumably have no close contact with commander Kony.

From fighters to bandits

"The LRA of today is not to be compared with the notorious army that made headlines in the international media in 2012," Agenonga added, explaining that sporadic attacks nowadays are carried out primarily to guarantee the survival of its members.

Many fighters also go underground by mingling with the nomadic Mbororo herders in the region.

"Of course, nomadic herders themselves are also sometimes victims of kidnappings and hostage-taking by LRA fighters," Agenonga said. 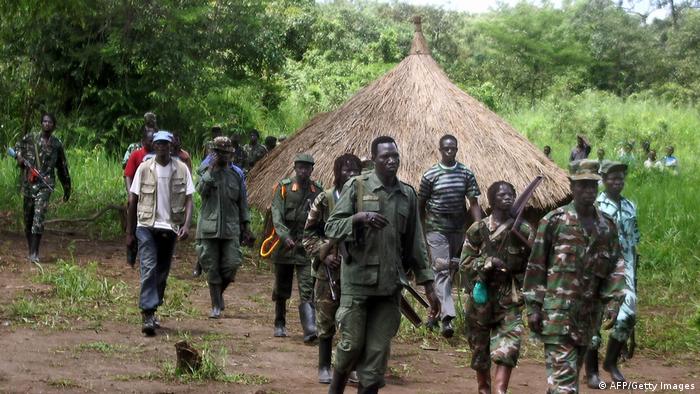 The LRA are now fighting for survival, not a cause

CAR MP Ernest Mizedjo agrees that the LRA fighters now behave more like a criminal gang that is trying to survive by staging raids and dealing in ivory.

"The LRA rebellion has turned into a business in recent years," he told DW. "They smuggle and trade arms across borders, supplying all sorts of other militias in northeastern DRC."

"They smuggle ivory and also trade in smuggled ivory from Sudan. So, the LRA has turned from a rebel group into a band of criminals doing illegal business. "

But there are indications that the LRA fighters in the CAR are growing tired of their way of life.

There are reports that some fighters have presented themselves to authorities, as confirmed by Judes Ngayakon, governor of the Haut Mbomou region.

"I recently received a delegation from the LRA who told me they were ready to hand over their weapons," Ngayakon told DW.

But that's not all: In the capital Bangui, there are rumors that Joseph Kony is ready to negotiate a ceasefire agreement. In return, he would want to be involved in a possible peace process — and be given CAR citizenship. CAR's Minister of Humanitarian Action, Virginie Baikoua, confirmed this correspondence to DW. 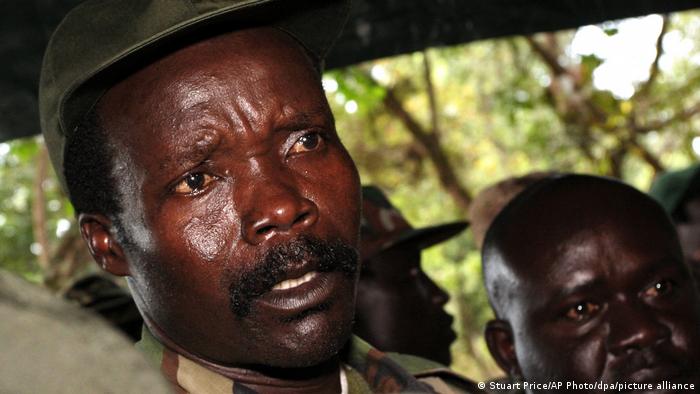 What's behind it then? Ernest Mizedjo believes all the evidence indicates that the LRA fighters have grown tired.

"They've probably lost moral too, and maybe it's just that they don't have a leader anymore," he said. "In addition to this, they simply don't have any support. Every rebellion needs a certain amount of support from the population." Mizedjo hopes this means that the farmers who fled their lands can now return to their fields.

Aubin Kottokpinze, who has been at the forefront of the fight against the LRA in CAR since his kidnapping in 2008, agrees. Today, Kottokpinze is the President of the Association of LRA Victims and advocates for justice above all else.

"We welcome the fact that the Ugandan rebels are leaving our country and laying down their arms," he said. "Our concern is that our state and the international community meet their responsibilities and acknowledge our suffering."

"We also want the perpetrators brought to justice. We ask the CAR government to support us in our quest for justice before the International Criminal Court."

Jean-Fernand Koena contributed to this article adapted from German.

Dominic Ongwen was a child soldier and a commander of one of Africa's most notorious rebel militias. His fate will now be decided by the International Criminal Court in the Hague. But can a victim be a perpetrator, too?

Despite his conviction with crimes against humanity, the International Criminal Court did not opt for the maximum available punishment, citing the former child soldier's own suffering.