Tensions over an energy-rich border lake have ratcheted up with the death of 12 fishermen. The DRC has said Ugandan troops are firing on "anything that moves." 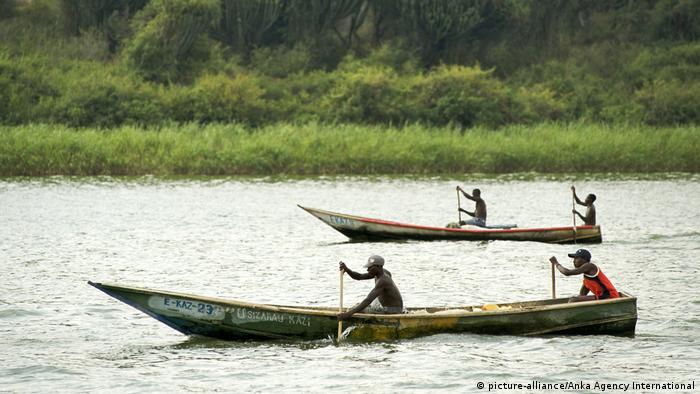 Twelve fishermen died and a dozen more were unaccounted for on Lake Edward, officials from the Democratic Republic of the COngo (DRC) said on Monday. Over the past week Ugandan and Congolese forces have exchanged fire in a dispute that has left 30 people dead or missing at the disputed border lake.

Lake Edward is the smallest of the Great Lakes of eastern Africa and runs along the border between southwestern Uganda and northeastern DRC. The lake area is home to the Virunga national park, Africa's oldest park, which is famous for its gorilla reservation.

Since the start of 2018, Lake Edward has seen a rise in tensions between the two neighboring countries, as they have quarreled for the lake's energy resources. The lake falls inside Congo's North Kivu province, a troubled area that, along with South Kivu, has been devastated by ethnic and rebel violence since the mid 1990s.

Shooting 'anything that moves'

"The 12 bodies of our compatriots are still floating on Edward Lake," said Muhindo Kyakwa, a senior Congolese official of the province of North Kivu.

"We can't retrieve them because Ugandan troops are opening fire on anything that moves," he told AFP news agency, adding that "a dozen fishermen" were still missing.

The violence on Lake Edward erupted last week, when the DRC's navy said it sent a mixed civilian and military patrol onto the lake to investigate reports that several Congolese fisherman had been stopped by Ugandan forces in Congolese waters last Wednesday.

What followed was an exchange of gunfire between security forces of both countries, which the Congolese government says was initiated by the Ugandan navy, who allegedly opened fire on the Congolese patrol.

Read more: Uganda in the grip of violent crime wave

The DRC and Uganda were involved in a bitter conflict from 1998 to 2003 that resulted in millions of deaths.

Since then, the two countries have had a tense relationship at certain points in time. The Congolese have accused Ugandan forces of encroaching on their territory, while Ugandan authorities have complained that the DRC does not do enough to fight militia activity near the border.

Two British nationals kidnapped in Congo have been released, the UK Foreign Office has said. The two were abducted along with their driver at the Virunga wildlife sanctuary on Friday. The driver remains missing. (13.05.2018)

The UN accused DR Congo security forces of committing horrific acts of violence against civilians in the war-torn Kasai region. The country's human rights minister questioned the findings in an interview with DW. (04.07.2018)