Thousands of people are still awaiting rescue after Typhoon Vamco battered the northern Philippines earlier this week. The storm produced "unprecedented" floods and landslides that left dozens dead and missing. 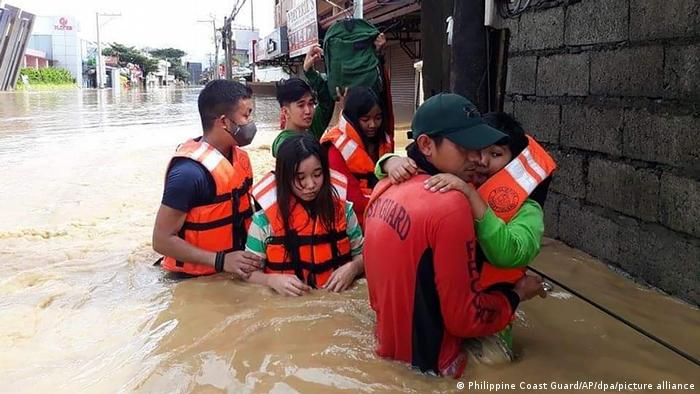 Police in northern provinces of the Philippines said Saturday that Typhoon Vamco had left at least 53 people dead and 22 more missing after causing flooding and landslides.

The "unprecedented" floodwater levels caused by the torrential rains forced some families in the provinces of Cagayan and Isabela to seek refuge on their rooftops, according to reports by the dpa news agency.

Manuel Mamba, the Cagayan provincial governor, pleaded for more support on DZMM radio, saying: "This is unprecedented. It's our first time experiencing this kind of flooding, our rescuers are already overwhelmed."

"Our province has turned into an ocean of muddy floodwaters," he said.

The Cagayan Valley, which is home to around 1.2 million people, saw particularly extreme levels of flooding as the nearby Magat Dam overflowed releasing the equivalent of two Olympic-sized swimming pools per second on Friday, according to government reports.

Almost 14,000 people were moved to evacuation centers as rescue teams were sent to Tuguegarao city early on Saturday with more help expected to come from nearby provinces, according to the coast guard.

Philippines hit by yet another typhoon

The mayor of Tuguegarao, Jefferson Soriano, told DZMM radio that: "We believe it would take more than a week before the floods subside," provided there is no further rain.

The city was cut off from the rest of the country due to flooded roads, he added.

Locals took to social media to beg for help, sharing photos and addresses on Twitter under the hashtag #CagayanNeedsHelp, which became a trending topic with millions of tweets. 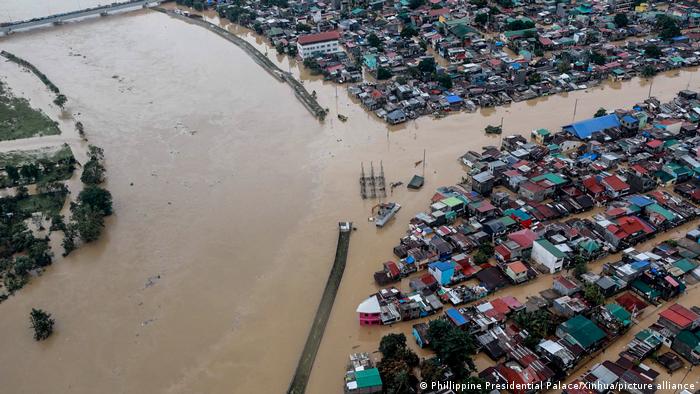 Typhoon Vamco was the 21st tropical cyclone to hit the Philippines so far this year. It had already torn through the low-lying regions around the capital Manila on Wednesday leaving millions without electricity and claiming several lives.

Over 50 were killed during the four previous storms, all since October. The deadliest typhoon to hit the country was Typhoon Haiyan in 2013, which left more than 6,300 dead and displaced over 4 million.

Vietnam is now braced for Vamco's arrival — landfall is expected on Sunday morning.

Packing winds of up to 165 kilometers per hour (103 miles per hour), Vamco is forecast to hit a swathe of Vietnam's coast from Ha Tinh to Quang Ngai province, the government's weather agency said. Thousands have already fled their homes as airports and beaches have been closed and fishing put under a temporary ban.

Vietnam has also experienced a series of tropical storms in recent months which killed at least 159 people. "There has been no respite for more than eight million people living in central Vietnam," said Nguyen Thi Xuan Thu, president of the Vietnam Red Cross Society.

"Each time they start rebuilding their lives and livelihoods, they are pummeled by yet another storm."