After the Aegean Sea earthquake, teams in the Turkish city of Izmir are trying to rescue as many people as possible from the rubble. More than 100 people have been confirmed dead so far, Tunca Ogreten reports from Izmir. Caglar and his mother survived under the rubble for three and half hours before they were rescued. "I was able to talk to my mother," said, Caglar a 30-year-old dentist. "I could touch her, but we hadn't heard anything from my father since we were buried." When the rescue team managed to knock a hole in the wreckage and a paramedic asked whose hand he was grabbing, it wasn't Caglar's — nor was it his mother's. "Leave him," he told the rescuers. "He is dead: Save me."

In the Turkish city of Izmir, where about 100 people have died since a magnitude 7.0 earthquake originated about 75 kilometers (45 miles) away in the Aegean Sea on Friday, dozens of men with dusty helmets and boots have rushed about for days, carrying stretchers. A child by the name of Elif would be transported on one of these stretchers on Monday. Buried under the debris, the 3-year-old held on to a firefighter's finger for 65 hours — and survived. 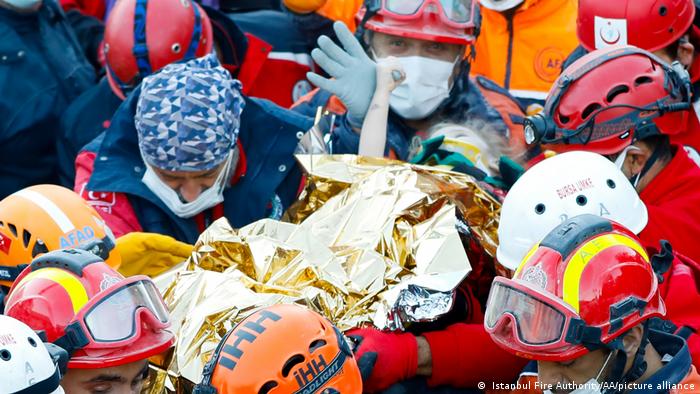 Many residents of Izmir have shown solidarity with people who have been left homeless, bringing them food and clothing. Izmir looks like a huge refugee camp. Disaster and emergency management officials and the community quickly improvised temporary roofs to shelter the people who were displaced when more than a dozen buildings crumbled in Izmir, which, with more than 3 million people, is Turkey's third-most-populous city. Tents are pitched everywhere. Using tape, the police have cordoned off buildings with cracked facades or that are otherwise unsound.

The shelter was set up immediately, and help was provided, said Mert Dogru, who was seated with his family at a table in front of their tent for breakfast. He and his family are getting by without too many problems in this difficult time, the 29-year-old Dogru said. His biggest concern at the moment is that the surveyors give a fair damage assessment of his damaged house, he added. 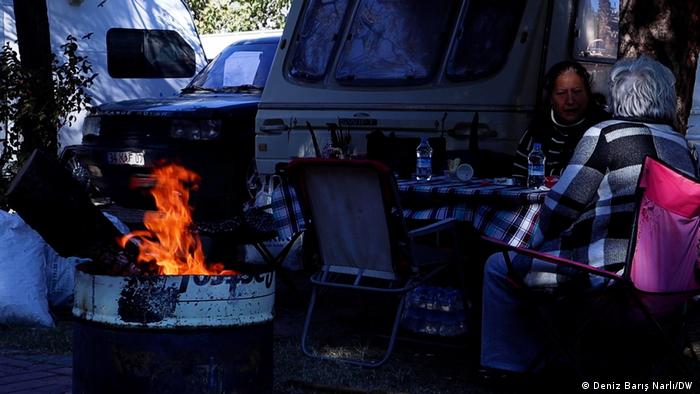 A stroll through Izmir reveals how shoddily the city's buildings were constructed — even the newest ones. About 60% of those still standing after the earthquake in the Bayrakli district, for example, are cracked and will have to be torn down completely.

"If the earthquake had lasted longer than 15 seconds, many more buildings would have collapsed," said Serdar Sandal, the mayor of the Bayrakli district.

A rescuer clearing rubble from the Riza Bey apartment complex, where at least eight people have been buried in the rubble since the earthquake, said: "When the excavator shovels the concrete, it dissolves into dust."

The areas hit hardest by the earthquake were built on alluvial soil, said Alim Murathan, the president of the Izmir branch of Turkey's Chamber of Geological Engineers. Alluvial soil can be built on in principle, he said, but the buildings have to be very robust. If the epicenter of the earthquake had been closer to the city, he said, the effects would have been even more disastrous.

Read more: A new camp for displaced people in Greece is 'worse than Moria'

Aysegul Unveren, a professor who had lived in the Riza Bey complex for five years nearly two decades ago, remembers a 2003 earthquake. "The walls cracked and the tiles fell off," she said, prompting her to move from Riza Bey because she was afraid. "Allegedly, the house was fixed up again, but it was probably not enough," she said. "Shouldn't the state supervise such measures?"

Although many buildings are damaged and many people have been put up in tents, life in Izmir is slowly returning to normal. "Get well, Izmir," the city's digital billboards read.