Turkey's "March for Justice" has marked an unexpected triumph for the Turkish opposition. But its leader, Kemal Kilicdaroglu, will now have to show whether he knows how to build on the momentum. 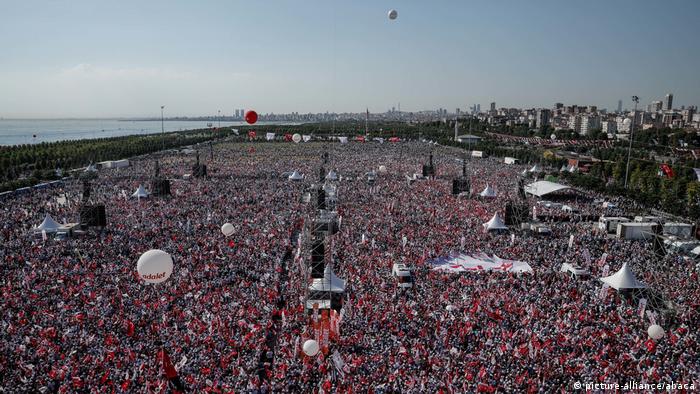 Kemal Kilicdaroglu's "March for Justice" scared the Turkish government and electrified his supporters. In recent weeks, tens of thousands of people followed the Turkish opposition leader on a march from Ankara to Istanbul. Hundreds of thousands showed up at the march's end point in Istanbul's Maltepe district, in what was the biggest protest against President Recep Tayyip Erdogan in years. "We will tear down the walls of fear. The last day of our march is a new beginning," cried the chairman of the Republican People's Party (CHP) to the cheering crowds. But actual impact of the march remains to be seen.

Clearly, the march boosted Kilicdaroglu's - and his party's - confidence. It unified the opposition and reinforced his own position. "The mood in the CHP is very positive", says Felix Schmidt, office manager of the Istanbul branch of Friedrich Ebert Foundation, a German political foundation associated with the Social Democratic Party (SPD). Kilicdaroglu, who has been a controversial figure in his own party, has gained a new image and demonstrated that he is able achieve success by trying out new strategies. His march brought him new supporters outside his party and wider recognition in society.

Unexpected success for the opposition

On June 15, when the 68-year-old announced in Ankara that he would march to protest against the imprisonment of his party friend, Enis Berberoglu, almost no one took him seriously. He had to cover a distance of over 420 kilometers in the summer heat. The government ridiculed Kilicdaroglu, saying that he should take the express train instead, but Kilicdaroglu could not be stopped. It seemed like the head of the CHP, who was often criticized for supposedly lacking courage, was growing more and more determined as each day passed.

As the numbers of people joining the march grew, the government became nervous. Erdogan railed against the Kilicdaroglu march for supporting "terrorists," and adding that there was no difference between him and the coup plotters of July 2016. Other politicians in Erdogan's Justice and Development Party (AKP) said the government had not built the roads between the country's major cities for "terrorists", while the pro-government newspaper wrote of the "march of the traitors." But the accusations were not really convincing. 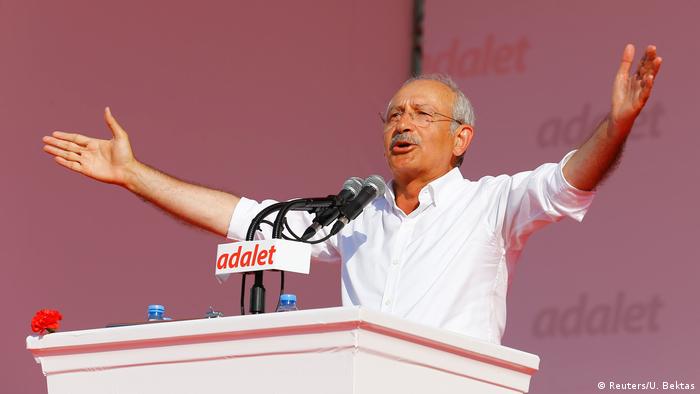 "It was difficult for the AKP to discredit the march," said Kristian Brakel of the Istanbul branch of the Heinrich Böll Foundation, a German political foundation. Accusing the established CHP of terrorism is futile. The columnist Murat Yetkin writes in the newspaper Hurriyet that equating the march with the coup attempt does not strike a chord with the majority of people. Surveys have also shown that many AKP voters are also dissatisfied with the judiciary.

In addition to restoring the independence of the judiciary, Kilicdaroglu also demanded that all imprisoned members of parliament and journalists be released, the state of emergency be lifted, the presidential system be withdrawn, and end be put to the one-man regime. "July 9 is not the end of the march, but the beginning of freedom," said the CHP chief, promising not to give up until all the demands had been met. 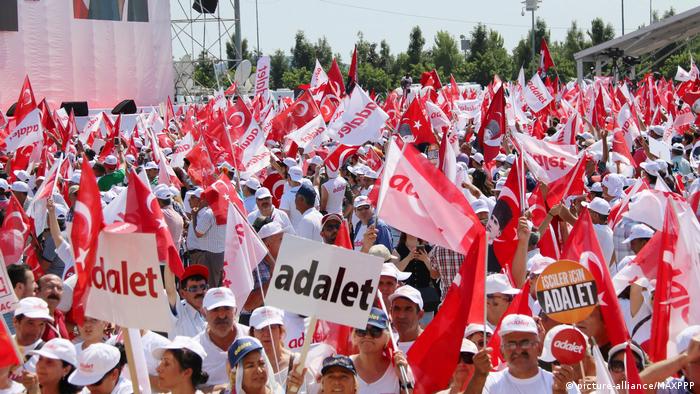 Protesters were out en masse demonstrating against Erdogan

The number of CHP voters is limited

"It will certainly be difficult to maintain momentum," says Felix Schmidt of the Friedrich Ebert Foundation. CHP leaders know that further steps have to be taken and that the meeting in Maltepe was only the beginning. "CHP leaders have still not completed a plan for further action, but I have spoken to CHP representatives who are very hopeful that it will be possible to maintain the momentum," says Schmidt, who has close ties to the party.

However, the CHP can only become a real alternative to the AKP if it expands its electoral base. "The problem, however, is the fact that in Turkey, electoral behavior is still influenced by cultural identity," Brakel points out. In Turkey, the majority of the electorate votes right of center. For leftist, nationalist and secular CHP, it is difficult to exceed its core electorate of about 25 percent.

No imminent change of course

Yet the rally has made the AKP nervous. On the day after the march, AKP spokesman Mahir Unal accused Kilicdaroglu of playing a "dangerous game" and spreading "anarchy in society". "When people are told to take to the streets, it is fascism," said the spokesman, whose party regularly calls for the people to take to the streets. He went on to say that the CHP leader should return to parliament and stop seeking justice on the street.

"The march scares the AKP; otherwise it would not fly off the handle like that. It will now probably try to hush up the march," says Brakel. On Monday, pro-government media went to great lengths to avoid mentioning the rally at the end of the march. Or the media tried to downplay the march's success, like the daily newspaper Daily Sabah that interviewed a political scientist who explained why the march would be forgotten in a few weeks.

"The government will now surely try to put on a show of strength on the anniversary of the coup attempt on July 15," says the political expert Schmidt. He does not believe in a change of course. In fact, it does not look as if the government will give in. In July, the Istanbul courts ordered the arrest of 42 university employees, including a renowned political scientist. Arrest warrants have been issued for another 30 academics.

Human rights watchdog Amnesty International has accused Turkey of 'arbitary dismissals' in a series of purges since last year's failed coup. More than 100,000 public sector workers have lost their jobs, its report says. (22.05.2017)