In its latest attempt to quell nearly two weeks of public protests, the Turkish government has hinted that it might hold a referendum on the redevelopment of a popular park in the concrete jungle of Istanbul. 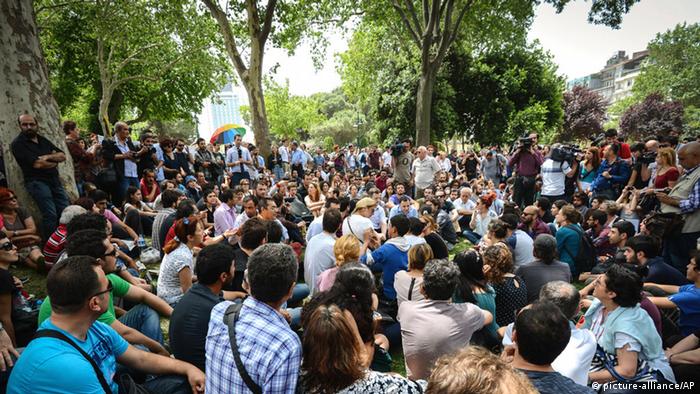 A Turkish government spokesman on Wednesday evening appeared to float the idea of a referendum on the redevelopment of Gezi Park in Istanbul. The project was the catalyst first for public protests in the park, and then around the country as people reacted angrily to police efforts to clear the demonstrations, sometimes using force.

"We might put it to a referendum… In democracies only the will of the people counts," spokesman Huseyin Celik was quoted as saying by the AFP news agency.

However, Celik also said that police would continue efforts to clear Gezi Park of protesters, after Prime Minister Recep Tayyip Erdogan on Wednesday instructed his interior minister to bring the displays to an end within 24 hours.

"Those with bad intentions or who seek to provoke and remain in the park will be facing the police," Celik said.

The first park protests began on May 31, with matters coming to a head on Tuesday in Istanbul's central Taksim Square. Police cleared the square in violent altercations with demonstrators; the authorities used tear gas and water cannons while some protesters threw projectiles including Molotov cocktails.

The Human Rights Foundation in Turkey said that 620 people were injured in the overnight clashes, while the Turkish Medical Foundation estimated that around 5,000 have been injured around the country as a whole since the demonstrations began. Three protesters and one police officer have died since May 31.

Chancellor Angela Merkel's office and the German foreign minister on Wednesday appealed for restraint from the Turkish authorities; President Joachim Gauck called his counterpart Abdullah Gul to personally express concern over "excessive violence." Gul has been one of the more moderate domestic voices in Turkey during the unrest, advocating talks with opposition groups.

"I am hopeful that we will overcome this through democratic maturity," Gul said on Wednesday. "If they have objections, we need to hear them, enter into a dialogue."

Prime Minister Erdogan held talks with 11 activists - including academics, students and artists - on Wednesday, although one lead protest group, Taksim Solidarity, said he had not chosen a representative sample of people for the discussions.

Turkey is hoping to gain accession to the European Union, although the country faced several major stumbling blocks - not least the divided island of Cyprus and its conflict with the Kurdish minority population - even before this month's protests.

"This is an important moment for Turkey, a chance for it to renew its commitment to European values," EU foreign policy chief Catherine Ashton said during a speech to the European Parliament in Strasbourg. "I am convinced that it can meet this challenge. Turkey as a candidate country needs to aspire to the highest possible democratic standards."

German Foreign Minister Guido Westerwelle said that the Turkish government "is sending the wrong message to the country and to Europe with its response to date to the protests." Angela Merkel's spokesman Steffen Seibert said Berlin expected Erdogan "to de-escalate the situation in the spirit of European values."

Germany is among the countries in the EU, as opposed to major proponents like Britain, to have held a comparatively reticent stance on whether Turkey's record on issues like human rights was up to EU standards.