In the face of Gezi Park protests, Turkish Prime Minister Erdogan plans to defy the opposition with huge rallies this weekend in Istanbul and Ankara. The location of the Ankara protest is both symbolic and strategic. 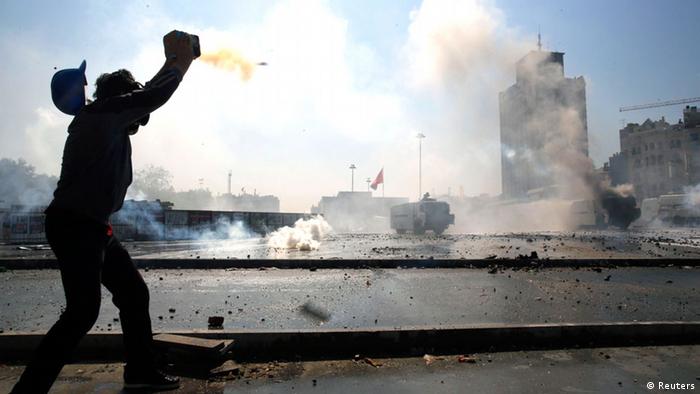 Ever since protests began in Gezi Park on May 28 , Erdogan has painted protestors as "thugs" and "extremists." More recently, he accused demonstrators of plotting against the government and trying to create chaos that would ultimately topple it. For some observers, Erdogan's decision to organize a major rally in the Ankara suburb of Sincan this weekend is not a coincidence. 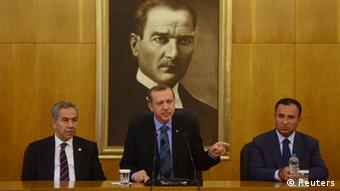 Erdogan says "extremist elements" are behind the protests

"Sincan was a symbol of the February 28 period," said Utku Cakirözer, senior journalist from the secular Cumhuriyet daily. "Now, there is speculation in the press that Erdogan's decision to hold the major rally there is deliberate."

On Feb. 28, 1997, Sincan became the symbol of Turkey's last major military intervention. The events became known as a "postmodern coup" or the "February 28 process." As part of a political campaign orchestrated against the Islamist Erbakan government, generals ordered tanks onto Sincan streets to back up their military coup. That crisis led to the resignation of Prime Minister Necmettin Erbakan's coalition government.

"In the past the usual suspect for coup attempts has always been the Turkish armed forces," said Omer Sahin of the daily newspaper Radikal in an interview with DW.

Today, the planners of the February 28 postmodern coup, including retired high ranking generals, are behind bars in a Sincan prison. And ever since Chief of General Staff General Necdet Ozel assumed office in 2011, the armed forces have refrained from making public statements in matters related to domestic politics, preferring instead to share their concerns with the government behind closed doors.

Utku Çakırözer, Ankara correspondent of the Cumhuriyet daily, says this has almost become an established norm. "This is probably why we don't hear anything from the army on the recent protests," he told DW.

But despite its apparent silence, Cakirözer says the army is very worried about the growing risks of a face-off between police and the military.

"On the first day of the demonstrations, in a couple of military establishments in Istanbul, army staff helped demonstrators against the harsh and disproportionate use of force by the police," Cakirözer said.

For instance, protestors were given surgical operation masks as protection against tear gas by staff at a military hospital. At one point a group of protestors took shelter at another military establishment. There was even a brawl between military and police officers at an army base. 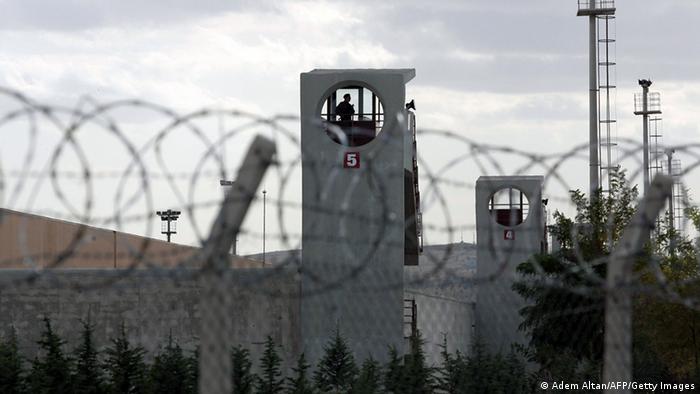 Sincan Prison: a reminder of state control over the military and of the consequences of an attempted 'coup.'

"Apparently, these incidents caused anxiety among the top brass of the armed forces," Cakirozer said. "Soon after that very strict measures were taken to keep military personnel [away from] the demonstrations. As far as I know, even the weekend leave of draftees has been suspended to avoid any encounter with the police."

Erdogan's recent speeches, however, have placed far more emphasis on a very different perceived "threat" to the government of his ruling Justice and Development Party (AKP).

"[Erdogan] sees the Gezi Park protests a plot aimed at toppling him - a plot that has domestic and international as well as economic dimensions," Cakirözer said.

At the daily Radikal newspaper, Sahin agrees, arguing that the language being used to describe the protests is a new development. "AKP officials are talking about a new term," he said. "That is, [a] 'civilian coup.' 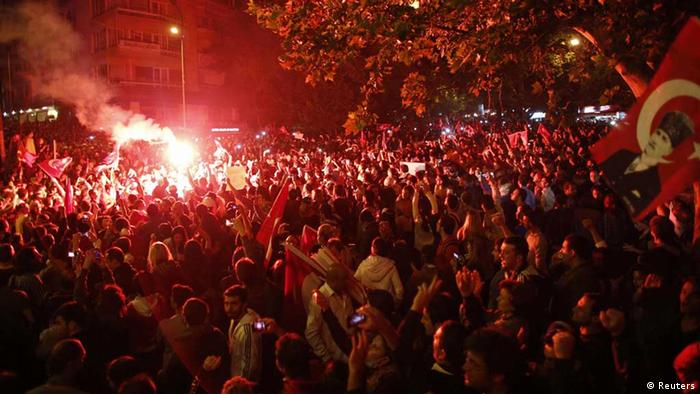 "Prime Minister Erdogan thinks he is being directly targeted by some financial groups, banks - those which the prime minister calls 'interest lobbies.' They think that the demonstrators are being manipulated, being used as instruments."

Sahin added, however, that the armed forces are not believed to be among the "plotters."

Some analysts see a political calculation behind Erdogan's policy of increasing tension in domestic politics.

"Erdogan plans to polarize the country, unify the party grassroots over these demonstrations," Cakirözer said. "He is hoping to win an outstanding victory in the next local elections, scheduled for March 2014." 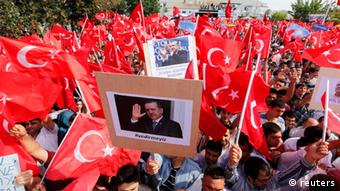 Erdogan is relying on his supporters for a counter-rally

The suburb of Sincan is home to a significant number of Erdogan's AKP followers. The AKP aims to use the rally to show its strength and influence to counter the demonstrations in Taksim and elsewhere, which drew hundreds of thousands of protestors.

Resistance in Istanbul with 140 characters

With continuing protests against Prime Minister Recep Tayyip Erdogan's government in Turkey, there has been sharp criticism that traditional media have largely been silent. But what role have social media been playing? (05.06.2013)

What started as a peaceful protest against plans to develop an Istanbul park expanded to a rebuke of Turkish Prime Minister Recep Tayyip Erdogan's policies. As unrest continues, DW reviews how the demonstrations started. (11.06.2013)

Calls for the resignation of Turkish Prime Minister Erdogan are growing louder as the violent clashes between police and demonstrators escalate. Yet Kurds would like him to say. (06.06.2013)