Turkey's referendum runs deeper than 'Yes' or 'No'

Less than two weeks remain before Turkey’s referendum on a presidential system and street campaigners are baring the brunt of grievances ahead of the polarizing decision. Diego Cupolo reports from Ankara. 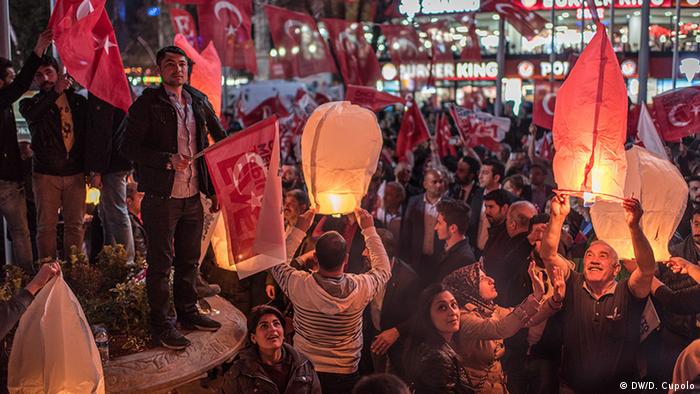 In central Ankara, it can be hard to think amidst the noise. Campaign buses are parked daily on opposite corners of Kizilay square, each one blasting propaganda as shoppers snake through crowds of flag wavers and flyer distributors.

Foot traffic is heavy and campaigners from across the political spectrum work side by side to sway voters for the upcoming referendum. In less than two weeks, Turks will decide on whether to consolidate power under the presidency, currently held by Recep Tayyip Erdogan.

Currently, national polls show the "Yes" and "No" votes are nearly tied and as the referendum approaches, the two contrasting visions for the nation's future often play out in the streets.

"The fact we have a close race proves there is democracy in Turkey," said Serhat Tugral, a lawyer working in a tent where legal experts explain the constitution to voters and the reasons to vote for "Yes" on the presidential system.

"We need a strong leader for the stability of the country, especially after the coup attempt," Tugral told DW. "We need to defend democracy."

He was then interrupted by an elderly "No" voter who had been listening in.

That outburst was a reference to national news coverage of the referendum, in which "Yes" vote supporters were getting significantly more airtime than their counterparts. A recent study of TRT Haber, the publicly-owned and financed national broadcaster, found that President Erdogan and officials from the ruling Justice and Development Party (AKP) had been given 4,113 minutes of coverage in the first three weeks of March. During the same period, opposition advocates with Republican People's Party (CHP) were on air for 216 minutes while the pro-Kurdish People's Democratic Party (HDP) had just one minute of coverage. 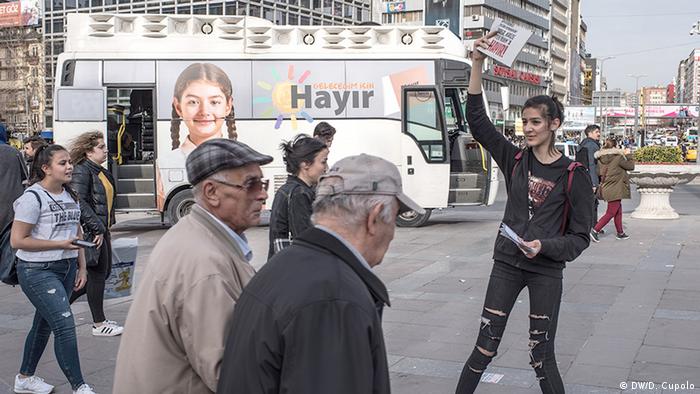 Before ending his outburst, the elderly man also pointed out that law students with the "No" campaign had tried to set up a tent on the same street corner to share their analyses on the constitution, but were denied permission.

When asked about the apparent biases, Tugral simply said, "Oppression is in the nature of campaigning."

Both sides under pressure

Still, it is not just "No" voters who feel mistreated in the run up to the referendum. Some students who support the presidential system have expressed fear of voicing their opinion on university campuses, where they may be subject to scorn from their peers.

Turkey's pious population has long been suppressed under Turkey's secular legal system, which banned women with headscarves from attending universities or holding state jobs. Only recently, were such restrictions loosened under Erdogan's leadership and the notion of a Muslim populace overcoming the secular elite continues to play a significant role in the minds of many voters today.

In trying to restore their place in the country's politics, street campaigners with the "Yes" vote, such as Omer Gurbuz, 38, are targeted daily with verbal insults and degrading attacks on their intelligence.

"Sometimes people take our brochures, tear them up in front of us and throw them in our face," Gurbuz told DW. "I just try to stay calm and respectful."

The recent AKP campaigning bans in Europe have also played into the rhetoric of a victimized voting sector as anti-Erdogan, pro-Kurdish rallies have continued to take place. For Muhammet Fatih Sonmez, another lawyer with the "Yes" campaign,increased tensions with Europe can only help increase the voter turnout.

"The crisis with Germany and Holland are good because they bring out voters on both sides," Sonmez said. "Politicians in Turkey and Europe gain from this so I don't see it as a problem." 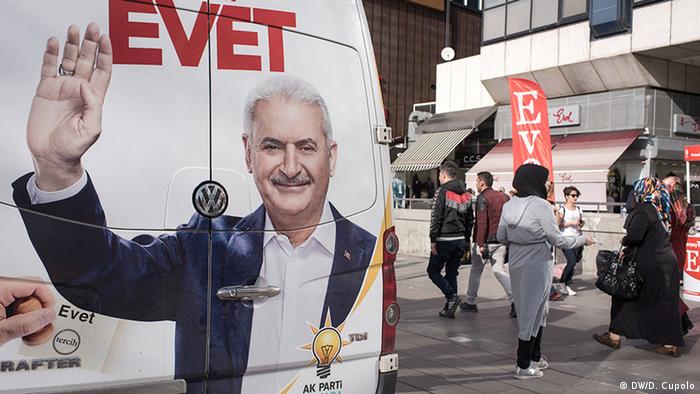 Ban or no ban, Ayhan Rustaii, a "No" campaigner for CHP, said she wished her party had the funding to campaign in Europe. Rustaii said the AKP had an unfair advantage in mobilizing state resources for the "Yes" vote.

"Everything about their campaign is helped with our tax money," Rustaii told DW. "They give people snacks and drinks" and hand out flags with "Yes" slogans while CHP supporters must buy their own supplies.

Rustaii also said some activists distributing flyers for the "Yes" campaign were being paid daily wages - a claim AKP campaigners in Kizilay denied - whereas most campaigners for the "No" vote worked on a voluntary basis.

In addition, few violent attacks on "Yes" campaigners have been reported while supporters of the "No" vote were allegedly assaulted 123 times between mid-January and March 15, according to a CHP report.

When "Yes" campaigners were asked whether they'd support the presidential system if an opposition leader took power, most gave unclear responses, usually saying the country would be better managed and experience fewer conflicts under "one brain."

"You won't find any reasonable people around here. Our country is going backwards," said Mehmet, 23, a CHP Youth Branch campaigner who gave only his first name.

"Even in my house we are divided into three opposite poles so it's normal that people are polarized on the streets," Mehmet told DW. "We are united only when we watch football."