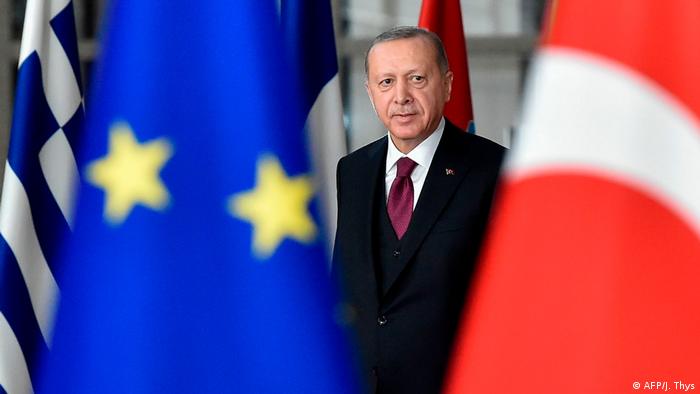 President Recep Tayyip Erdogan vowed Wednesday to keep Turkey's border open for migrants and refugees trying to get to Europe until the EU delivered on each of Ankara's demands over a 2016 migration deal with the bloc.

"Until all Turkey's expectations, including free movement, ... updating of the customs union and financial assistance are tangibly met, we will continue the practice on our borders," he said in a televised speech to lawmakers from his AK Party in parliament.

Erdogan said Turkey would lodge its demands to the bloc prior to the next EU summit in Brussels on March 26.

The Turkish president also said Greece's treatment of migrants and refugees at their border was akin to that of the Nazi regime.

"There is no difference between what the Nazis did and those images from the Greek border," he said, followed by images of migrants being tear-gassed as they attempted to force their way across the border.

On Tuesday, Turkish Foreign Minister Mevlut Cavusoglu told state-run Anadolu news agency the European Union should stop "stringing Turkey along" over assisting with the millions of migrants on its territory. His message came the day after the two parties agreed to review the 2016 accord aimed at halting the flow of refugees into the EU.

Cavusoglu said the EU should take "sincere" steps to help Turkey with the situation, such as finding ways to ensure Syrian refugees can return home.

Turkey has opened its borders, letting migrants and asylum-seekers head towards the EU. The bloc faces yet another crisis that could divide it once more, says Bernd Riegert. (02.03.2020)

Very few of the people currently trying to get into the EU via Turkey are from Syria. The reason why highlights a key aspect of the current crisis, says Rainer Hermann of the German daily Frankfurter Allgemeine Zeitung. (06.03.2020)

NATO has met for crisis talks after Syrian airstrikes killed dozens of Turkish troops, marking a major escalation in the brutal conflict. Follow DW for the latest updates on the fallout of the Idlib offensive. (28.02.2020)