Turkey jailed more journalists than any other country this year. According to the Turkish Journalists' Association, 148 journalists are currently imprisoned and many media outlets have been shut down. 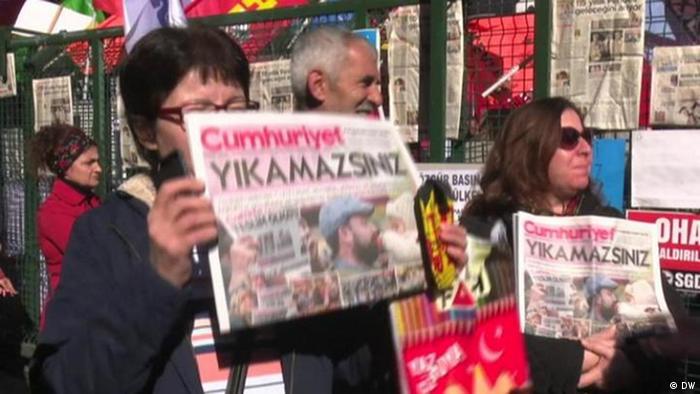 "In the past journalists were killed in Turkey,” said one journalist, who was not identified, in the Human Rights Watch report on the freedom of press in Turkey. "This government is killing journalism in its entirety."

According to Reporters Without Borders (RSF) and the Committee to Protect Journalists (CPJ), Turkey was the worst country for media freedom in 2016.

"After two years, Turkey is once again the world's biggest prison for journalists," said Erol Önderoglu, RSF representative in Turkey.

Turkey has now dropped two places in RSF's Press Freedom Report, and is in 151st place out of 180 countries. Ahead of Turkey are Tajikistan and the Democratic Republic of Congo.

According to the Turkish Journalists' Association (TGC), 148 journalists are currently in prison and the number of journalists on trial are difficult to determine, as hundreds of journalists are being tried on many charges including espionage, aiding and abetting terrorist organizations, and insulting public officials.

RSF representative Önderoglu, awarded with the Turkish Journalists' Association's Freedom of Press award, himself spent ten days in jail in June 2016, charged with spreading propaganda for a terrorist organization. 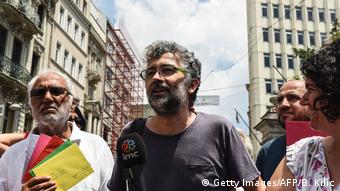 Önderoglu was imprisoned earlier this year amid massive protests

Önderoglu told DW how he saw press freedom from behind bars. "I think I went through the same paradox of being awarded and then going to jail that my 'terrorist' -labeled colleagues had been through all these years. The winds of false freedom blew me right into a prison cell and I wasn't even surprised," he said.

As part of the state of emergency declared after the failed coup attempt of July 15th, nearly 170 media outlets, including newspapers, TV and radio channels, news agencies, magazines and publishers were shut down.

Justification for the shutdowns were given as having ties to the Gülen Movement, the international opposition movement the Turkish government says was a perpetrator of the coup attempt. But it wasn't only Gülen-affiliated media organizations that were shut down: Kurdish, Alavite and opposition media outlets were also closed.

During the failed putsch, rogue soldiers commandeered tanks and fighters jets, bombed parliament and seized bridges in a bid to take over power. Gülen, who has lived in self-imposed exile in the US state of Pennsylvania since 1999, has denied involvement in the coup attempt.

Turkey has sacked or suspended more than 100,000 people and arrested 37,000 since the coup attempt in an unprecedented crackdown. Nearly 2,500 media employees and journalists also lost their jobs, hundreds more lost their press credentials, an unknown number of journalists had their passports revoked and were forbidden from leaving the country, and dozens had their properties confiscated.

In comparison, TGC numbers show that in the first five months of 2016, the number of journalists dismissed due to government pressure was under 900. 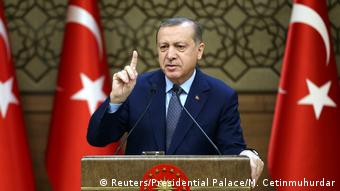 Erdogan is seeking expanded constitutional powers in a referendum

Thousands of blocked websites and social media postings were not included in the data, and according to a report by the Washington-based think tank Freedom House, a year earlier Turkey had already fallen to the category of the countries with "no internet freedom" from "partially free."

TGC chairman and seasoned journalist Turgan Olcayto described the state of press freedom to DW as: "not bad - very, very bad." "We've seen many coups in Turkey in the past but never has there been this much pressure, targeting and the ambition to imprison journalists. Freedom of the press doesn't exist in Turkey," he said.

Gokhan Durmus, chairman of the Journalists' Union of Turkey (TGS), said that the media could only report what the government wants them to hear. "Anyone who does the opposite is either punished or shut down. That is why the people aren't aware of unlawful or undemocratic practices."

And Turkish journalists aren't hopeful for the coming year either. There are concerns that pressure on the media will increase with a referendum to be held next spring on constitutional changes expanding President Recep Tayyip Erdogan's powers.

"I don't remember a time in the past 20 years that I've been so hopeless and have had such a bleak outlook for the days ahead," RSF representative Onderoglu said.

Can Dündar did not deliver award remarks for the pianist, Fazil Say. Caner Aver explains the background. (18.12.2016)

Novelist Asli Erdogan and linguist Necmiye Albay have been in jail for nearly three months for alleged terror ties. Charges against them have drawn criticism from the EU and rights groups. (23.11.2016)