Foreign Minister Mevlut Cavusoglu has urged the Greek Cypriot government to accept a cooperation plan on drilling. The discovery of gas in the eastern Mediterranean has complicated attempts to reunify the divided island. 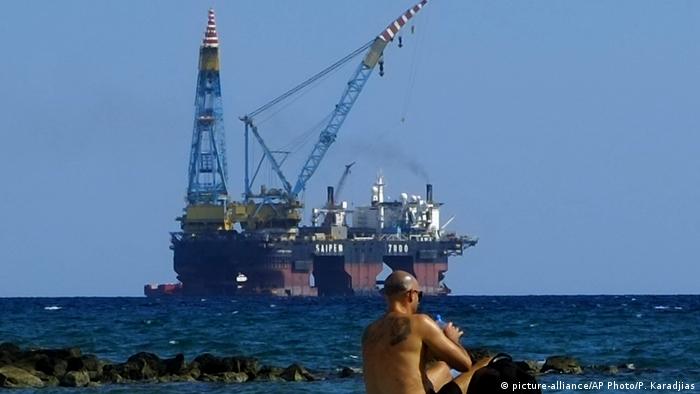 Turkey is determined to continue drilling for gas in waters off Cyprus despite opposition from the Greek Cypriot government and the European Union, Turkish Foreign Minister Mevlut Cavusoglu said on Sunday.

He told the Kibris Postasi (Cyprus Post) newspaper that Ankara was still pursuing exploration opportunities in areas where it has been licensed by Turkish Cypriot authorities in the north of the divided eastern Mediterranean island.

Turkey's deployment of two ships to search for oil and gas has sparked a dispute with the Greek Cypriot Republic of Cyprus in the south and prompted a threat of EU sanctions for Ankara's "unacceptable escalation" of the row.

Turkey and Cyprus have overlapping claims to regional waters, linked to the 45-year-old split of the island and Ankara's rejection of agreements the Republic has reached with other Mediterranean states on maritime economic zones.

The Republic insists that Turkey's drilling operations are contrary to international law and that decisions on hydrocarbons are its sovereign right, while Ankara says Greek Cypriot authorities can't decide for the whole island, and that waters around Cyprus lie on its own continental shelf.

Cyprus has issued arrest warrants for the crew of one of the ships, which is now drilling 68 kilometers (42 miles) off the island's west coast.

The Greek Cypriot government has also launched legal proceedings against three firms that it accuses of supporting illegal Turkish oil and gas exploration in its waters.

On Saturday, the Turkish Cypriot leader reissued a proposal to establish a joint committee to end the row over the offshore gas drilling activities.

According to a statement, the proposal seeks to turn the exploration activities into a platform for cooperation rather than one of "tension and conflict."

Cyprus has been divided between the internationally recognized Republic of Cyprus and a breakaway state in the north set up after the 1974 Turkish invasion.

Several wider reunification efforts have failed and the discovery of natural gas resources in the eastern Mediterranean has only complicated the negotiations.

The Cypriot government says energy discussions should form part of overarching peace talks. It has agreed to share future gas proceeds with Turkish Cypriots after a deal is signed.