Canan Kaftancioglu has been sentenced to prison for old tweets that allegedly spread terrorist propaganda. Her CHP party says the conviction is politically motivated. 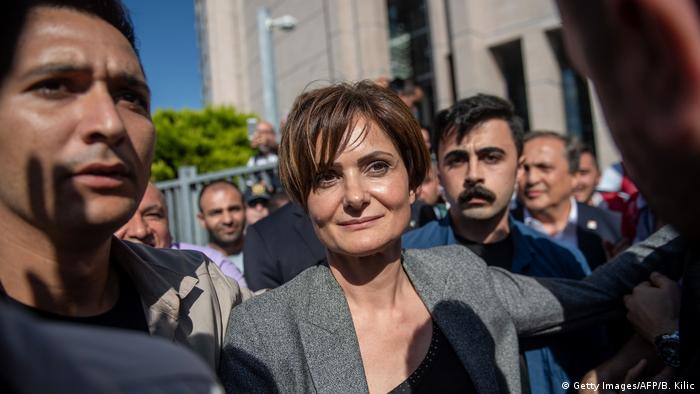 Prominent opposition figure Canan Kaftancioglu was sentenced to nine years and eight months in prison by Turkish court on Friday, because of tweets she posted between 2012 and 2017.

The head of the Republican People's Party (CHP) in Istanbul was convicted of insulting the president and spreading terrorist propaganda in the social media posts.

"Neither you all, nor I deserved this," Kaftancioglu said outside the courthouse, with supporters cheering her on. "If the court ruling is not in line with the law and is shaped by the wishes of political power, it means there is no law in this country,"

"The cases opened are concluded not in the courtrooms but in the rooms of the (presidential) palace," she added.

Kaftancioglu's trial began shortly after the CHP's Ekrem Imamoglu won a re-run election for mayor of Istanbul in June, a re-run that was called after President Recep Tayyip Erdogan was reportedly irate that his ruling Justice and Development Party (AKP) had lost the helm of Turkey's biggest metropolis.

Imamoglu expressed his sadness over the verdict, but said he believed Kaftancioglu's conviction could be overturned in the appeals court.

Kaftancioglu has two appeals left, one in the standard appeals court, and a second in the higher court of cassation, should the first judge decide against her.

Turkey's judicial independence has been repeatedly questioned since Erdogan used a failed coup in 2016 to come down hard on academics, civil servants, journalists, and other politicians who oppose him. Tens of thousands of people have been jailed after criticizing the AKP and President Erdogan.

Erdogan has also moved to have his would-be rivals for the presidency removed from the AKP.

Three members of the pro-Kurdish People's Democratic Party (HDP) have been relieved of their positions in three eastern provinces. It's the latest crackdown by Erdogan's government on the opposition. (19.08.2019)