Five former officials at Turkey's Soma coal mine have been jailed over a 2014 mining disaster in the country's west that killed 301 people. The prison sentences range from 15 to 22 years. 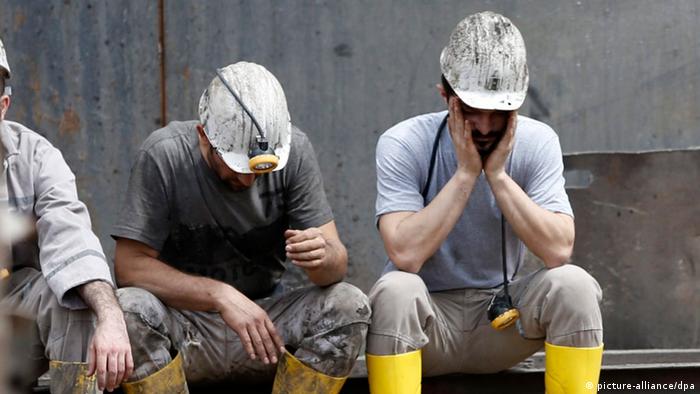 A Turkish court on Wednesday handed down a 15-year prison sentence to the former chief executive of the Soma coal mine, where 301 people lost their lives four years ago.

The accident in May, 2014, was the country's worst ever mining disaster.

The court in the western town of Akhisar jailed ex-CEO Can Gurkan for 15 years for his role in the incident, the state-run Anadolu news agency reported.

The mine's general manager, Ramazan Dogru, was sentenced to 22 years and six months, as was technical manager Ismail Adali. Anadolu also said that operations manager Akin Celik and technical supervisor Ertan Ersoy were both given 18 years and nine months. The sentences were far more lenient than those sought by prosecutors at the start of the trial in 2015.

The court gave nine other employees shorter sentences and acquitted more than 30 defendants who had been facing charges ranging from "killing with probable intent" to "criminally negligent manslaughter."

Hundreds of miners were trapped underground when a fire engulfed one of the pits and caused carbon monoxide gas to spread through the mine.

The 301 deaths at Soma, about 480 kilometers (300 miles) south of Istanbul, fueled public anger in Turkey over poor safety standards for mine workers.

Eleven months after 301 coal miners died in Turkey, managers and inspectors are standing trial for negligence. But families have criticized the government for shielding state institutions tasked with worker safety. (12.04.2015)

Larry King: Legendary US TV host dead at 87 5m ago