Annual inflation has climbed to its highest level since 2002, while the Turkish lira has fallen to record lows. However, President Recep Tayyip Erdogan insists on keeping interest rates low. 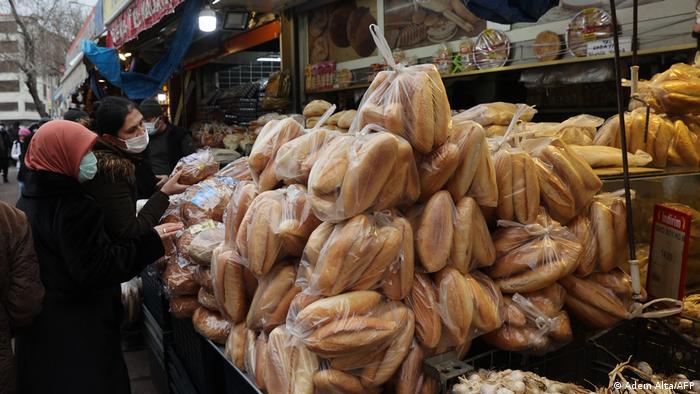 Food prices rose by nearly 44% in 2021, according to official data

Turkey saw consumer prices jumping 13.6% in a single month, from November to December last year, according to official statistics published on Monday.

That means inflation reached 36.08% over the past year — the highest annual jump since President Recep Tayyip Erdogan first came to power in 2003. Authorities also said food prices rose 43.8% in 2021.

Erdogan was holding a meeting with cabinet ministers to discuss the issue on Monday.

At the beginning of 2021, one US dollar could buy 7.4 Turkish liras. The Turkish currency has since depreciated to a record low of 18.4 liras to $1 last week. However, it has since partially rallied due to a new government scheme that has the state guaranteeing to compensate losses to people saving in liras. As of Monday, the Turkish currency traded at about 13.2 lira for $1.

What is behind Turkey's high inflation?

Many blame the president for the skyrocketing prices. Turkey has been struggling to prop up the lira's value for several years. However, the crisis has escalated since September, when Erdogan pushed the central bank to start cutting interest rates.

Usually, central banks respond to inflation by hiking up interest rates. According to economic theory, higher interest rates stimulate people to save money in domestic currency, as returns are higher. This leads to the economy slowing down because fewer liras are available to borrow, but also raises the value of the domestic currency.

However, Erdogan rejected this notion, claiming interest rate hikes were "the mother and father of all evil." He insists that keeping interest rates low is needed to stimulate the economy. The conservative politician also pointed to Islamic rules against usury to justify his opposition to tax hikes.

On Monday, Erdogan reaffirmed his position to stick to low interest rates and accused "the elites" of profiting from "unearned interest income."

DW Correspondent Dorian Jones said prices are hitting the poor hard. "Prices are rising on everything you can imagine. Buying milk, it was 16 lira last year and now its 24... For basic staples, things that poor people rely on like lentils, the prices have increased threefold, from 8 to 24 lira (€1.63) for a packet."

Consumers are even finding the cost of toilet paper hard to stomach. "Last year a packet of 9 was 50, then it went to 70 and now its a mindblowing 150 lira."

The government also triggered criticism by announcing major price hikes for electricity, gas, and petrol at the begining of the new year, as well as raising other costs such as bridge tolls.

As prices soar in Turkey, poverty and discontent deepen

Turkish opposition leader Kemal Kilicdaroglu mocked Erdogan's "economic genius" on Twitter, accusing him of ruining everything he has touched. Erdogan's critics also cast doubt on official data, with the independent Inflation Research Group saying the real numbers were much worse, and that yearly inflation was actually 83%.

Erdogan faces an increasingly tough path to reelection in 2023, with the latest opinion polls projecting he would lose in the runoff round against most major rivals.