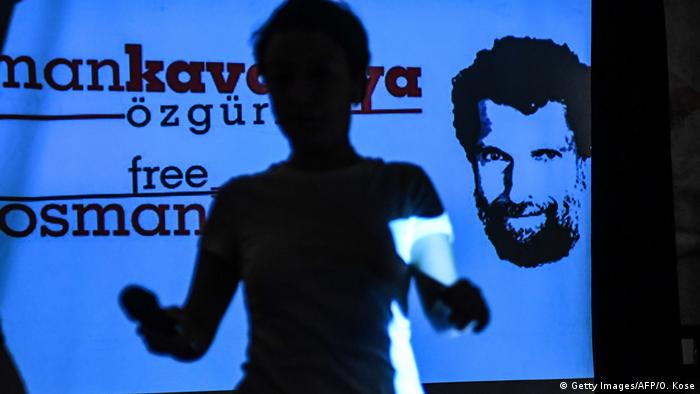 On Tuesday, Turkish police detained the philanthropist Osman Kavala, accusing him of ties to the failed 2016 coup, hours after he was acquitted by a court on separate terrorism charges for the 2013 anti-government protests in Gezi Park.

Prosecutors issued a warrant for Kavala's arrest after he was ordered released from the maximum security Silivri prison following 840 days of detention.

DW correspondent Julia Hahn in Istanbul said Kavala could be detained again for up to 12 days "and then — depending on the outcome — might be sent back to Silivri jail in Istanbul."

Hahn said the move was "an attempt by the authorities to keep Kavala behind bars, no matter what critics say."

On Twitter, the German Foreign Ministry condemned Kavala's rearrest and demanded a quick explanation "in compliance with the standards of rule of law to which Turkey has committed itself."

"We are shocked by this new imprisonment," the Foreign Ministry tweeted Tuesday evening.

The new charges against the 65-year-old Kavala include attempting to overthrow the Turkish constitutional order through a coup attempt in July 2016 against President Recep Tayyip Erdogan's government.

The Turkish government blames US-based cleric Fethullah Gulen and his movement for the uprising. Ankara considers the group a terrorist organization and has arrested thousands of people with alleged ties to both it and Gulen, who was also a former ally of Erdogan's. 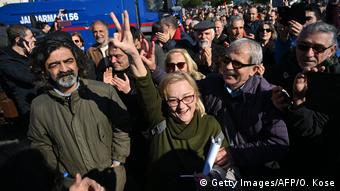 Celebrations for Kavala's acquittal in the Gezi Park trial were short-lived, as he was re-arrested soon after

More than 100 supporters — including lawmakers, Kavala's wife and co-defendants — had anxiously waited for Kavala's release at a roadside restaurant near the maximum security Silivri prison complex, only to be left shocked by his rearrest.

Before news of the new charges broke, members of Turkish civil society had said they were both surprised and pleased about the acquittal on terrorism charges.

"The Gezi trial has become one of the main human rights issues in Turkey. Even if it's just one trial, we saw that the right to a fair trial could still exist and there can still be a space for justice in courtrooms," Tarik Beyhan, from Amnesty International Turkey, told DW in Istanbul.

Eight other activists, along with Kavala, were also acquitted Tuesday after they had been charged with organizing the anti-government protests in 2013.

Kavala, a former entrepreneur who founded Anadolu Kultur, a non-profit that focuses on cultural and artistic projects promoting peace and dialogue, was arrested  in November 2017, four years after the Gezi Park protests.

The European Court of Human Rights called for his immediate release in December, saying Kavala's time in custody served "the ulterior purpose of reducing him to silence'' with a "chilling effect on civil society.''

The Turkish art patron and businessman Osman Kavala has been in jail for more than two years, accused of wanting to overthrow the government. DW spoke with him about his life in jail and his civil society projects. (16.12.2019)