Turkish authorities have blocked access to the popular online encyclopedia Wikipedia. No official reason was given, but local media said the move was related to associating Turkey with terrorism. 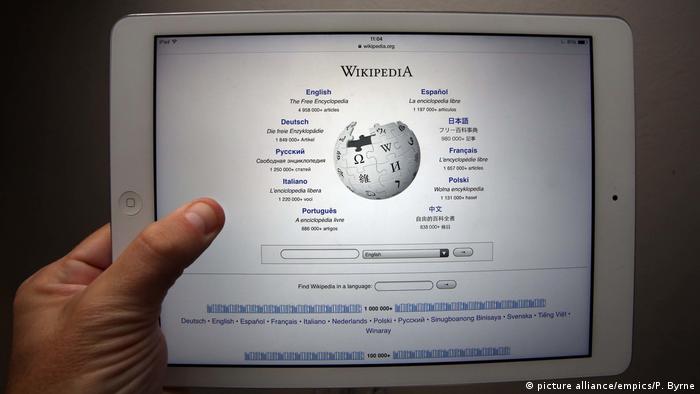 Turkey Blocks, an organization that monitors internet censorship, said an administrative order blocked all language versions of the online encyclopedia.

Several major internet operators had complied with the order.

"The loss of availability is consistent with internet filters used to censor content in the country," Turkey Blocks said. The organization added that an administrative order was usually followed by a full court order.

The 18-page Law Nr. 5651 deals broadly with "fighting crimes" published on the internet.

Wikipedia seeks "outside counsel" with Turkey mum over block

No reason was given for blocking the world's fifth most popular website, but critics on social media speculated it may have to do with this month's controversial constitutional referendum or an entry about Turkish President Recep Tayyip Erdogan.

Turkey's private NTV television network, which itself has come under criticism for censoring anti-government content, said access to Wikipedia was blocked for content supporting terrorism. It also said the block was implemented due to entries "placing Turkey on the same level as the 'Islamic State'" despite requests to remove the content.

NTV said the block would be lifted after the US-based Wikipedia implemented four demands: opening a representative office in Turkey; complying with court orders; acting in line with international law; and refraining from taking part in "operations to denigrate" Turkey.

In response to a Deutsche Welle inquiry, the Wikipedia Foundation said that it is "committed to ensuring that Wikipedia remains available to the millions of people who rely on it in Turkey. To that end, we are actively working with outside counsel to seek judicial review of the decision affecting access to Wikipedia. We hope the issue can be resolved promptly."

A volunteer at Turkey Blocks told DW she suspected that in order to block Wikipedia Turkish authorities used filtering or "Deep Packet Inspection" (DPI) software used by some countries for surveillance and censorship. "Normally http websites are easily blocked, but to block a single URL more advanced techniques have to be used," she said.

"Since Wikipedia uses https protocol, it's not possible to block a single URL, that's why Turkey's Information and Communication Technologies Authority (BTK) blocked the entire website," she added.

Following the block, Wikipedia was the top trending hashtag worldwide and in Turkey.

Turkish authority's move to block the hugely popular website is likely to add to concerns over the deterioration in the rule of law, democracy and basic freedoms in the country.

Blocking or throttling internet access has become common during terror attacks, mass protests or in response to the internet companies' failure to remove content.

Hundreds of websites critical of the government are blocked in Turkey.