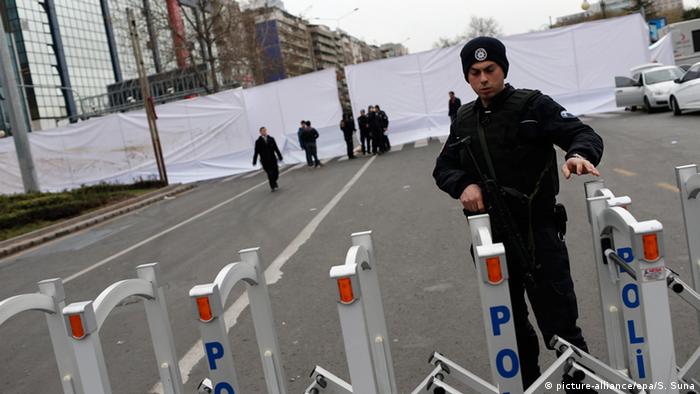 A bomb blast has hit the crowded center of Ankara, killing at least 37 people and injuring 125. It is the third bomb to strike the capital in the past six months.

The two other suspects were apprehended in Istanbul, and said to have connections with Kurdish rebels.

One of the suicide bombers in Sunday's attack in central Ankara is believed to be a woman with links to the Kurdish militant group PKK, a Turkish security source told the AFP news agency.

In February, the Turkish government accused Kurdish rebels for another car bombing in Ankara, which was later claimed by a PKK splinter group called the Kurdistan Freedom Falcons (TAK).

The allegations come as Turkish Health Minister Mehmet Meuzzinoglu said on Monday that the death toll rose to 37 people, which included at least one attacker.

"As of this morning … we lost three more citizens in hospital," said Health Meuzzinoglu in televised comments, adding that over 70 people's injuries were still being treated.

In an apparent response to the suicide bombing, Turkish warplanes on Monday launched airstrikes on PKK targets in northern Iraq.

"Our state will never give up its right to self-defense against all kinds of terror threats," Turkish President Recep Tayyip Erdogan said in a statement published by his office.

"Our soldiers, policemen, village guards, all our security forces are resolutely struggling against terrorist organization at the risk of their lives," Erdogan added.

In 1984, the PKK launched an insurgency against the Turkish state. The decades-long conflict has left more than 40,000 people dead.