Star Wars film sets in southwestern Tunisia are sinking into the desert sands. After loyal fans raised funds for their protection, a tourist agency is trying to grab more tourists' attention.

Luke Skywalker is said to have been raised on a non-arable desert planet, beneath two suns, in a landscape formed by heat, sand and dust.

On the edge of the Sahara, Star Wars director George Lucas found his dream film location and named the film planet after the Tunisian village he'd uncovered: Tatouine - or Tatooine. More than 40 years ago, the film team set up shop in Tunisia and soon started filming in a variety of locations.

Ong Jmel lies in the Southwest of Tunisia. To Star Wars fans, the location is better known as Mos Espa, the galaxy waystation where all the gloomy figures gather. It's where Luke Skywalker got to know the smuggler Han Solo, with whom he would embark on his adventures. It's also where Luke's father, Anakin Skywalker - who later became Darth Vader - was born. 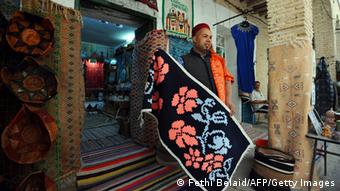 There's also the small village of Matmata, where Luke Skywalker was raised by his uncle and aunt. The house in the film is actually a hotel which was constructed in such a way as to remain cool in the desert heat - namely, underground.

In the Sidi Driss hotel, tourists can still discover film props and signs of the action, such as switchboards left in the wall. Yellowing posters and photos of the film crew are hung on the wall.

Both lications are pilgrimage destinations for Star Wars fans.

You might think that tourism here would be booming; Star Wars has millions of fans around the world, and who doesn't enjoy slipping into a Jedi knight costume and setting foot where Luke Skywalker himself once tread?

For many years, that was the case. Then terrorism came to Tunisia and the tourists stayed home. The town of Mos Espa - a collection of buildings made of wood and papier-maché - were swallowed up by the desert sand.

Save Most Espa, a 2014 initiative by fans, collected donations in excess of $75,000 for the project, a sum handed over to the Tunisian government. Mos Espa was dug out of the sand. 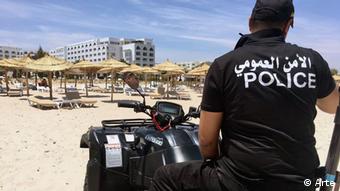 Attacks on tourists in Tunisia have tourists changing their vacation destinations

Nevertheless, tourists are still staying home or preferring to stay at the sandy beaches in the North of the country instead of driving the nearly 500 kilometers (over 300 miles) to the South, where George Lucas's desert planet makes its home and where there is enough sun to completely dry out the landscape.

A new tourist destination for Asians?

Loyal fans have not given up, however. Nabil Gasmi of the regional tourism organization CDTOS is continuing work to protect the film set from being forgotten. "We have to. Everyone here in the area profits from the film set and sees it as a part of their inheritance," he told German news agency dpa.

He dreams of turning the region into a tourist magnet - complete with convenience store, museum, film screenings and festivals. Residents should be brought on board, as many, especially the young people, are unemployed.

A delegation of Tunisian tourism managers presented their idea at the International Tourism Exchange (ITB) trade fair in Berlin in March 2017. They are especially interested in acquiring tourists from around Asia that are increasingly traveling around the globe to visit the hot spots. Why not add southwestern Tunisia to the list?

The latest science-fiction film by the French director is the most expensive film ever made in Europe. The storyline might feel familiar - but fans are presumably into such movies for other thrills anyway. (20.07.2017)

A pilgrimage through 'Star Wars' filming locations in Tunisia

In southern Tunisia, locals are working hard to maintain the Star Wars film set - and draw tourists. Follow the footsteps of Luke Skywalker and rediscover some of the sites where the original movie was filmed. (14.12.2015)

As Tunisia’s president continues on his autocratic path while the economy is on its knees, can international aid return the country to a democratic track?

Africa's tourism industry all but disappeared during the pandemic, but since the start of 2022, travelers are returning to the continent. DW’s Arian Kriesch reports from Cape Town.