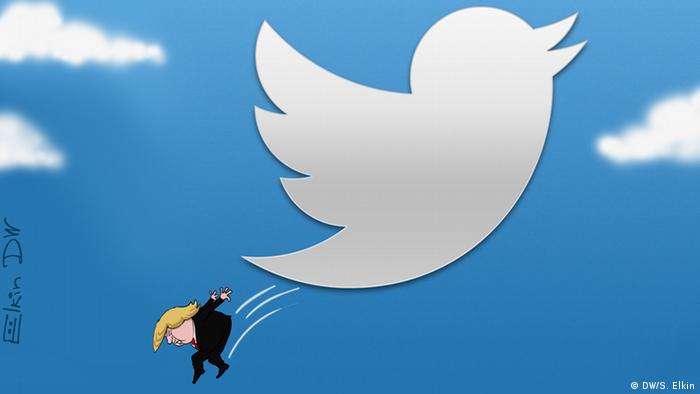 US President Donald Trump on Tuesday accused Twitter of censorship, and of "interfering in the 2020 presidential election," after the social network for the first time put a fact-check warning on two of his tweets.

"Twitter is completely stifling FREE SPEECH, and I, as President, will not allow it to happen!" he wrote.

Although Twitter is both able and legally entitled to remove anything Trump says on its platform, it is yet to do so. But Tuesday's move marked the first time it had called the accuracy of the president's comments into question.

In the initial tweets, Trump had called mail-in ballots "substantially fraudulent," and said they would result in a "rigged election," with votes forged and mail boxes robbed.

Those posts are now accompanied by a blue notification link from Twitter, advising readers to "Get the facts about mail-in ballots." The link redirects users to a page with news articles and information from fact-checkers that debunk unsubstantiated claims in Trump's tweets.

The US Centers of Disease Control and Prevention has been encouraging "mail-in methods of voting," to ensure citizens can observe social distancing rules and avoid crowds. Trump has frequently cast doubt on postal votes in the past, with more likely to be cast amid the coronavirus pandemic than in typical years.

It's also conventional wisdom in the US that high voter turnout tends to favor Democrats, with more Democrat supporters unlikely to show up on polling day than Republican supporters.

Twitter confirmed that it was the first time it had flagged one of Trump's tweets under a new policy designed to target harmful, misleading information. It introduced the rules earlier this month, initially to tackle unreliable claims about the coronavirus.

Although the US president frequently uses his account to make questionable statements and launch personal attacks, Twitter has long resisted calls to act. Instead, the company has argued that allowing controversial tweets from politicians to be published encourages discussion and helps hold them accountable.

Trump's press secretary has said his comments about household cleaners to combat the virus were taken "out of context" by journalists and scientists. Follow DW for the latest. (24.04.2020)

The US state is holding the Democratic presidential primary election, despite social distancing orders. Democratic officials had tried to postpone, but state Republicans sued to hold the vote on time. (07.04.2020)