US President Donald Trump has invoked national security concerns to demand a probe into US steel imports. While the move risks blowback from China, Trump's announcement saw shares in US steel rallied by over 8 percent. 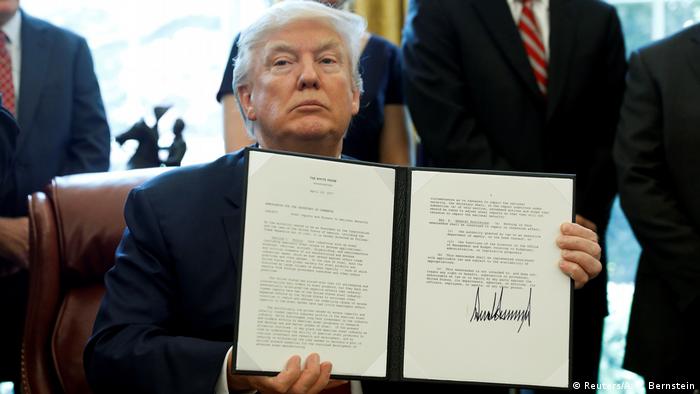 Citing national defense concerns, US President Donald Trump on Thursday was able to leverage a little-used law of the Trade Expansion Act that allows the government to invoke security interests to protect national production.

The probe targets the US' main steel importers, namely China but also Germany, whom Trump has accused of dumping cheap steel on the market and undermining US production.

Germany seeks EU help in steel row with the US

Germany has called on the European Commission to back its steelmakers by insisting on global trade rules in a dispute with US competitors over alleged German price dumping on the embattled US market. (24.03.2017)

China seeks to avoid trade war with US

Chinese Premier Li Keqiang said the country would open its economy wider to foreign investment and trade. US President Donald Trump has been on the offensive against the free-flow of Chinese goods. (15.03.2017)

"Dumping is a tremendous problem in this country," Trump said. "They're dumping vast amounts of steel in our country, and they're really hurting not only our country, but our companies."

Invoking national security interests, the Republican president said: "Steel is critical to both our economy and our military. This is not an area where we can afford to become dependent on foreign countries."

Trump was elected to the White House on an "America First" campaign vowing to rein in on foreign trade practices and boost domestic manufacturing. That message appeared to win him support in industrial states including Ohio, Michigan and Pennsylvania.

However, many observers were skeptical about the Trump's allegations that cheap steel imports posed a risk to US security. The Defense Department's annual steel requirements make up less than 0.3 percent of the national industry's output by weight.

Since Trump's election victory last November, steel shares have rallied on the back of prospective tariffs on imports and promises for increased infrastructure spending. On Thursday alone, following Trump's announcement, US steel firms saw their shares rise between 4 and 8.5 percent.

Nucor Chairman John Ferriola welcomed the president's move, saying in a statement: "We look forward to continuing to work with the president and Secretary Ross to ensure our trade laws are enforced so that U.S. manufacturers can compete on a level-playing field."

While Trump refuted that the probe specifically targeted Chinese importers, China's position as the world's largest producer of steel means it stands to lose the most from higher US tariffs on steel. Sagging global demand coupled with a slowdown in its domestic economy have seen China left with huge excess capacity.

The probe would also pair with Trump's assertion that he would use trade to coax China to do more to rein in an increasingly belligerent North Korea.

Earlier this year China accused the US of protectionist practices for imposing duties as high as 190 percent on exporters believed to being selling steel products below fair value or with the help of unfair subsidies.

In March Germany also complained over the US' duties on steel plate imports, saying the policy hurt a number of states across the world.

Both China and Germany have warned they could take their challenge before the World Trade Organization.