Trump lays out plan for first 100 days in 'Gettysburg Address'

Donald Trump has laid out plans for his first 100 days in office, if he is elected president. The Republican candidate slammed the women accusing him of harassment and pledged to unwind "horrible" trade deals. 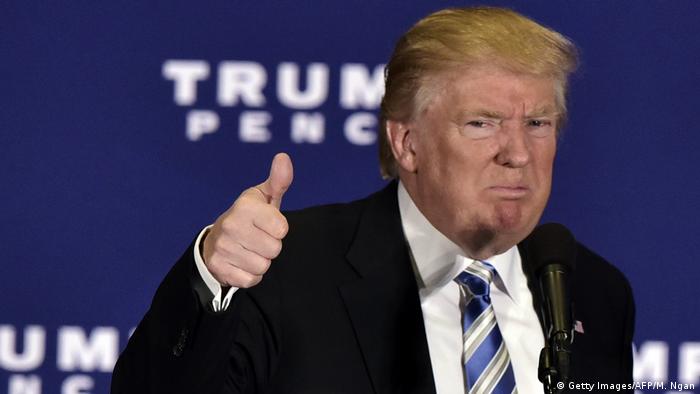 Trump sows doubts over legitimacy of US presidential election

Trump's refusal to accept the results upends a basic tenet of American democracy - where the losing candidate concedes. Clinton's ability to heal the nation as president will depend, in part, on her margin of victory. (22.10.2016)

Opinion: What side of Trump will the US see on Election Day?

Trump's popularity ratings at the moment indicate that he will probably not win the US presidential election. But what happens then? (22.10.2016)

As Republican presidential nominee Donald Trump sinks in the polls, Melania Trump has publicly defended him against allegations of sexual assault. She said his 2005 comments about groping women were just "boy talk." (18.10.2016)

The Gettysburg event was described by the Trump campaign as a chance for their candidate to deliver the "closing remarks" of the campaign on Saturday, 17 days before the November election.

In his speech, Trump described his political movement as the change that "only arrives once in a lifetime."

"I've seen the system up close and personal for many years, I've been a major part of it," Trump said in Pennsylvania. "I know how the game works in Washington and on Wall Street, and I know how they rigged the rules of the game against everyday Americans."

Trump announced a series of measures for his first 100 days in power, including plans to repeal and replace Obamacare, allow the controversial Keystone Pipeline, revive the coal industry and stop the "billions and billions" of dollars the US was giving the United Nations to fight climate change. Also, the candidate said he intended to dismantle or radically renegotiate the North American Free Trade Agreement (NAFTA) and pull out of the Transatlantic Trade and Investment Partnership (TTIP) talks.

At the same time, Trump pledged to impose term limits on members of US Congress and tougher restrictions for political lobbyists. Talking about his plan to cut taxes, Trump said that middle-class American families would receive an average 35 percent tax relief. Another package of measures was aimed at rebuilding infrastructure and the US army.

'All of these liars will be sued'

However, a large portion of the Gettysburg speech was focused on Trump's accusations of voter fraud and media favoring his opponents.

The media was trying to "poison the mind of the American voter" by giving them coverage, according to the candidate.

"Every woman lied when they came forward to hurt my campaign. Total fabrication, the events never happened, never," Trump said of the women accusing him of sexual harassment. "All of these liars will be sued once the election is over."

He also accused the Democratic National Committee and the Clinton campaign of sending paid agents to stir up violence at his rallies.

Governing 'by the people'

The Pennsylvanian town of Gettysburg carries a strong symbolic message for American voters as it was the stage of the key Civil War battle and the site where President Abraham Lincoln gave his most famous speech, the Gettysburg Address, in 1863.

"We will drain the swamp in Washington D.C., and replace it with the new government of, by and for the people, believe me," Trump said, paraphrasing a famous Lincoln quote.

Ahead of the Saturday event, US commentators described the hastily organized meet as an attempt by the Trump campaign to control the narrative after a series of public blows. Although Trump is still trailing rival Hillary Clinton, polls show that he has narrowed the gap compared to the period immediately after a 2005 recording emerged in which the former reality TV star boasted of kissing women and groping their genitals without their consent.