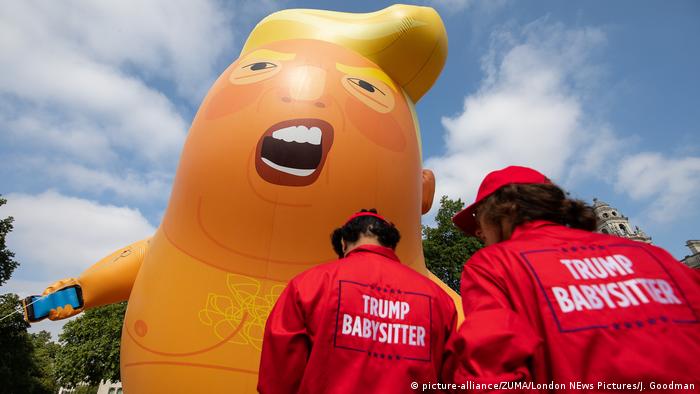 A large, helium-filled balloon depicting outgoing US President Donald Trump as an orange baby will be conserved at one of London's most popular museums.

"By collecting the baby blimp, we can mark the wave of feeling that washed over the city that day and capture a particular moment of resistance,'' Museum of London director Sharon Ament said Monday.

The blimp shows a nappy-wearing Trump with a sour expression. It was first spotted in the skies over the UK capital in 2018 when protesters took to the streets of London ahead of the US president’s impending visit.

It has since flown over multiple locations in countries like France Argentina, Ireland and Denmark.

The balloon will be a part of the museum's protest collection, which boasts of artifacts from the women's suffrage movement, protests against the war in Iraq in the early 2000s, as well as climate change rallies.

The creators of the blimp, which was originally paid for through crowdfunding, said it would serve as a reminder of the fight against the "politics of hate."

"We hope the baby’s place in the museum will stand as a reminder of when London stood against Trump — but will prompt those who see it to examine how they can continue the fight."

The announcement comes a day before the end of Trump’s term as the US president.

The 'Baby Trump' blimp was made famous by protesters in London in 2018. Organizers took it to Alabama ahead of Trump's attendance at a college football game, but an angry passerby stabbed it in the back.