US President-elect Trump appears to have changed his tune on climate change, saying there is "some connectivity" with human activity. He also rowed back from a pledge to investigate former rival Hillary Clinton. 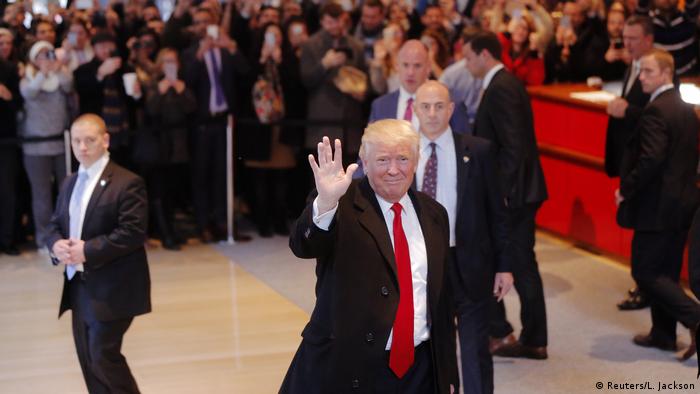 US President-elect Donald Trump made his comments on climate change to "The New York Times" on Tuesday, saying he would re-examine a campaign pledge to pull out of the COP21 Paris Agreement.

"I'm looking at it very closely. I have an open mind to it," he told the paper's executives and journalists.

The accord was reached in the French capital in 2015, after negotiations that involved 195 countries. It set the goal of limiting global warming to two degrees Celsius (3.6 degrees Fahrenheit) over levels before the industrial revolution.

Trump was reported to have said he believed it was likely there was a link between climate change and human activity.

"I think there is some connectivity," "The New York Times" columnist Thomas Friedman quoted him as saying when confronted at the meeting. "Some, something. It depends on how much." Trump was said to have nevertheless added that he remained concerned about how much green measures would "cost our companies."

"The New York Times" correspondent Maggie Haberman tweeted that Trump noted the importance of clean air, though he also promised to rejuvenate the US coal industry.

The United States, which is the second-largest emitter of greenhouse gasses after China, ratified the Paris accord in September, through an executive order from President Barack Obama. The fact that it wasn't backed by the Senate would make it easier for Trump to unpick the legislation.

Ahead of the November 8 election, Trump - who campaigned on a promise to return jobs and industry to America's "rust belt" states such as Ohio and Michigan - vowed he would "tear up" existing climate treaties. Even as far back as 2012, he tweeted that global warming was "a hoax" and that it was "created by and for the Chinese in order to make US manufacturing non-competitive."

At the meeting, Trump also reportedly distanced himself from the "alt-right," a loose collection of far-right, nationalists and white supremacists who hailed his election, and rowed back on an election pledge to have his former election rival Hillary Clinton investigated.

"I think it would be very, very divisive for the country," "The New York Times" reported Trump as saying.

Trump has also appeared to relent on former enmities, offering one-time bitter primary rival Ben Carson the Housing and Urban Development portfolio. Meanwhile, Trump spoke in almost conciliatory terms about "The New York Times" itself, whose staff he once called "really, really bad people," saying this time he had "great respect" for the paper.

US to review Afghan peace deal with Taliban 7m ago