Desmond Tutu, a key ally to Nelson Mandela in South Africa's fight against apartheid, has died at the age of 90. World leaders remembered his role as a "moral compass" and "his great warmth and humor."

Nobel Peace Prize laureate Desmond Tutu has died at the age of 90 in Cape Town, South African President Cyril Ramaphosa announced in a statement on Sunday.

Alongside late Nelson Mandela, Tutu was one of the most important voices against the old system of white minority rule known as apartheid. The Anglican cleric also headed the country's Truth and Reconciliation Commission in the post-apartheid era, and was seen by many as the conscience of the troubled nation.

Tutu "died peacefully at the Oasis Frail Care Center in Cape Town this morning," said Ramphela Mamphele, the acting chairperson of the Archbishop Desmond Tutu IP Trust and coordinator of his office. The statement, issued on behalf of Tutu's family, did not provide details on the cause of death.

Tutu praised as 'patriot without equal'

"Desmond Tutu was a patriot without equal; a leader of principle and pragmatism," Ramaphosa said in a statement.

The Nelson Mandela Foundation said, "His contributions to struggles against injustice, locally and globally, are matched only by the depth of his thinking about the making of liberatory futures for human societies. He was an extraordinary human being."

Tibetan spiritual leader the Dalai Lama said, "He was a true humanitarian and a committed advocate of human rights." 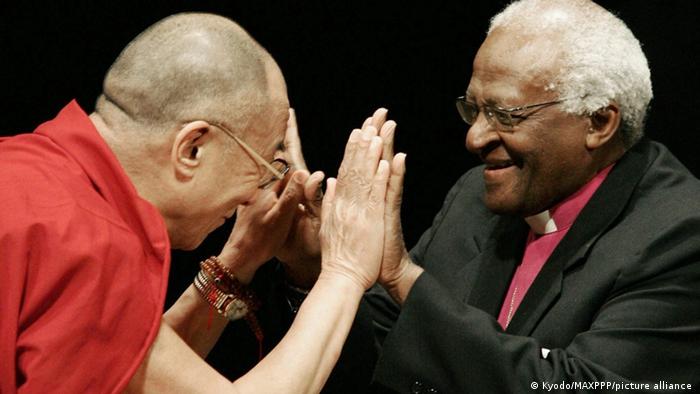 Pope Francis said in a statement issued by the Vatican that he was saddened to learn of the archbishop's passing.

"Mindful of his service to the gospel through the promotion of racial equality and reconciliation in his native South Africa, his Holiness commends his soul to the loving mercy of Almighty God," the statement read.

German Chancellor Olaf Scholz also offered his condolences, saying that Tutu had "made a decisive contribution to ending apartheid in South Africa."

"He was a lifelong advocate of the principles of humanity, freedom and equality, and worked to bring about balance and reconciliation among people."

"Especially at Christmas time and in view of his death, these are values that we particularly celebrate and hold dear," Scholz added.

US President Joe Biden says he and his wife, First Lady Jill Biden, were "heartbroken" to hear about Tutu's passing.  "His legacy transcends borders and will echo throughout the ages," the Bidens said.

"On behalf of the people of the United States, we send our deepest condolences to the people of South Africa who are mourning the loss of one of their most important founding fathers."

Former US President Barack Obama said Tutu was "a moral compass for me and so many others."

"A universal spirit, Archbishop Tutu was grounded in the struggle for liberation and justice in his own country, but also concerned with injustice everywhere," Obama said on Twitter.

Queen Elizabeth II said the royal family was "deeply saddened" by news of Tutu's passing and said the archbishop was a "man who tirelessly championed human rights in South Africa and across the world.

"I remember with fondness my meetings with him and his great warmth and humor," the queen said in a statement.

'He was a legend': South Africans on Desmond Tutu's death

"A man of faith convinced in the power of reconciliation through restorative justice," said African Union chair Moussa Faki Mahamat.

"[Tutu] was a true shepherd of peace," he added.

"Archbishop Tutu inspired a generation of African leaders who embraced his non-violent approaches in the liberation struggle," Kenyatta said.

Tutu won the Nobel Peace Prize in 1984 for his efforts in leading the non-violent struggle against apartheid.

While other leaders, like Mandela, were incarcerated, Tutu traveled and spoke widely, using his senior position in the Anglican Church and the esteem the Nobel Peace Prize brought to promote his anti-apartheid message worldwide and elevate the stories and lives of Black South Africans.

Following Mandela's release from prison after 27 years, Tutu led him onto a balcony at Cape Town City Hall where Mandela delivered his first public speech.

The archbishop's life was a testament to the hope and strength he placed on reconciliation in the divided nation, Ramaphosa said.

Dream of a 'rainbow nation'

While Tutu preached against the tyranny of apartheid, he would go on to be just as critical of Black political elites.

He even publicly criticized his ally Mandela over what the cleric describes as the "gravy train mentality" of Mandela's party, the African National Congress. Later, Tutu would castigate Mandela for his open affair with Graca Machel, who Mandela would eventually marry.

In 2013, Tutu withdrew his support for Mandela's party, describing South Africa as "the most unequal society in the world."

In recent years, Tutu started to campaign in favor of the assisted dying movement.

"Dying people should have the right to choose how and when they leave Mother Earth," he wrote in the Washington Post in 2016.

"I have prepared for my death and have made it clear that I do not wish to be kept alive at all costs.

Toward the end of his life, Tutu also spoke with regret that the dream of a true "rainbow nation" had yet to be realized.

Politician and fellow anti-apartheid activist Reverend Allan Boesak told DW that the archbishop acknowledged that his work was not yet complete.

"He knows that South Africa is still a society in which women are violently assaulted, we are still in many ways discriminating, despite our constitution, against LGBTQ persons. And so he would love for us, who are now living and taking up the baton and going forward with the struggle, to continue... because he knew the work is not done."

Is South Africa living up to its promise for LGTB people?

He was the first Black Anglican bishop of Johannesburg, and later became archbishop of Cape Town. Along with Nelson Mandela, he fought apartheid in South Africa. Today, he celebrates his 90th birthday.