Over two years after Israeli commandos raided a Turkish ship bound for Gaza and killed nine Turks on board, an in-absentia trial has started against four former Israeli officers. Israel has called it a 'show trial.' 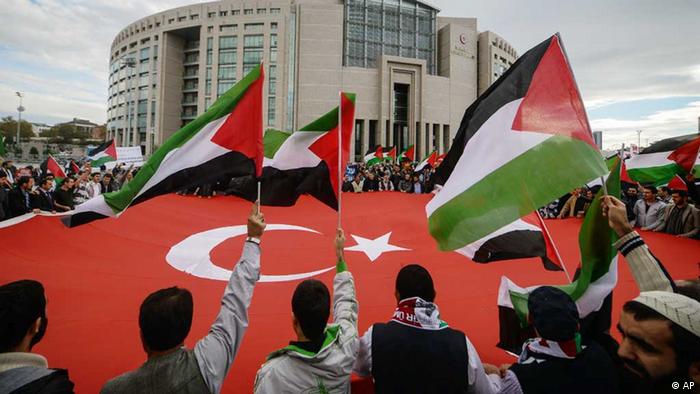 The trial of the four Israeli ex-military chiefs got underway in Istanbul on Tuesday, with scores of protesters outside waving the Palestinian flag and condemning Israel.

Turkish prosecutors are seeking life sentences for the four defendants, Israel's top officers of the time, for their role in the flotilla raid in May 2010. That's when Israeli commandos boarded a ship that was part of a flotilla bound for the Gaza Strip in violation of Israel's blockade of the Palestinian territory. The ship, the Mavi Marmara, was sailing under the Turkish flag and was carrying several Turkish activists. Nine of the activists died in the raid.

The four suspects on trial constituted the Israeli military top brass of the time. Former chief of staff Gaby Aschkenazi, former navy chief Eliezer Marom, former air force chief Amos Yadlin and the former head of air force intelligence Avishai Levi have been charged for their role in the operation.

Soured relations between Turkey and Israel are likely to receive another blow this week with the beginning of a controversial trial in a Turkish court against four Israeli generals for killing pro-Palestinian activists. (05.11.2012)

They were not present in the courtroom on Tuesday, as Israel does not feel they have done anything wrong. The charges facing the four men include manslaughter, attempted manslaughter, and causing bodily harm.

"This is not a trial but a show trial and has nothing to do with law and justice," Israeli foreign ministry spokesman Yigal Palmor told the AFP news agency, adding that the defendants had not been formally notified of the charges. "It's a propaganda showcase. The government of Turkey, if it really wanted to do something about this issue, would engage with Israel."

Izzet Sahin, a spokeswoman for the IHH aid organization that took part in the flotilla, said dozens of pro-Palestinian activists have travelled to Istanbul to give evidence at the trial.

"We have no doubt that the accused will be placed worldwide on the list of [internationally] wanted criminals," she said.

The incident put a deep rift between Turkey and Israel and the trial is likely to reopen those wounds. The two countries previously had a history of good relations, often taking part in joint military exercises.