If the dam breaks, the Spanish town of Huelva could be swamped by tons of toxic residue. The company producing the waste says it has a plan, but locals want a complete clean-up. Santiago Sáez reports from Huelva. 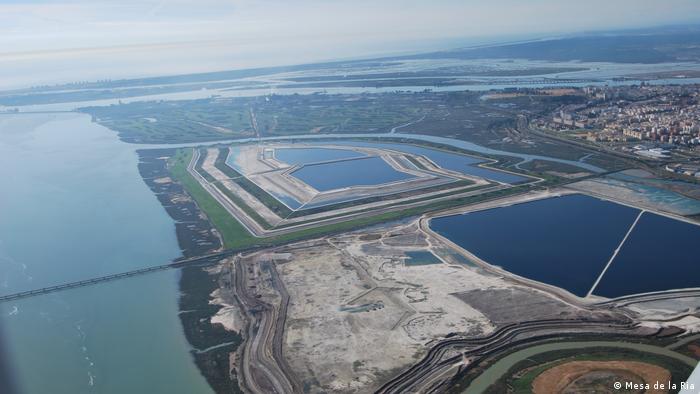 The harbor that saw Christopher Columbus set sail from Europe is now a little museum. There are a few artifacts from 1492 on display, but the star of the show are the replicas of the three caravels that traveled to the Americas. From the wharf one should be able to see the city of Huelva. Instead, there's a wide white wall sitting on top of the marshes.

The wall is the exterior of an industrial waste tailing dam, containing 120 million tons of phosphogypsum, a by-product of the manufacture of phosphate-based fertilizers. Between 1968 to 2010, different companies used the marshes to dump phosphogypsum. Officially, the permissible height is 2.5 meters, but, at some points, the dam is 35 meters high. 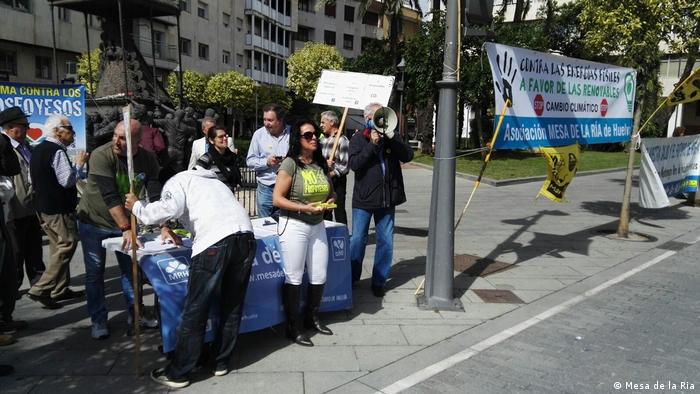 Locals have been staging protests against the polluting companies in Huelva

Fertiberia, the company responsible, has presented a plan to cover the area with earth, but that local politicians, environmentalists and scientists say that doesn't go far enough and want a complete clean-up. The Ministry of Environment has approved Fertiberia's proposal, but  locals are standing up in hope that the regional and local governments will veto the move.Mesa de la Ria

Dr. Jose Borrego, a geologist at Huelva University, directs a multidisciplinary group of scientists who advise the local government on the issue. Lately, he's beem particularly worried about the stability of the dams: "It's not a matter of if, it's a matter of when will they collapse," Borrego told DW.

The dams, he explains, are built over unstable swamp lands that could give way under the weight of the waste. "Think of it as putting a block of granite on top of a milk-soaked cupcake. The milk will escape and the cupcake will collapse." When that happens, he says, the phosphogypsum will slide into the river bed, creating a dam that could flood parts of the city and the towns upstream.

Phosphogypsum, as the company rightly says, is a relatively inert compound. It can even be used for profit, as has been pointed out by smaller projects. However, along with the gypsum, the dams are loaded with acid waters and heavy metals. And they're leaking.

Nobody knows more about the leaks than Rafael Perez-Lopez, a Geo-chemist working for Huelva University, whose office is just a few doors from Borrego's. He approaches his job directly, walking around the dams, taking samples and cataloging the hundreds of points where the polluted water spills onto the river. The picture he paints is terrifying. "The dams leak around 7.8 tons of arsenic and 1.8 tons of cadmium per year to the river, among other heavy metals like Uranium," Dr. Perez-Lopez told DW. "If we applied EU rules, they would be considered dangerous, and stored securely."

Fertiberia, the company responsible for the phosphogypsum dams, is the heir in a long chain of corporations in charge of the site since it became a dumpster in 1968. In 2010, after a long legal battle, the corporation had to stop spilling waste and bring forward a restoration plan, which has been recently approved by the Ministry of Environment. However, nobody in Huelva seems happy with their proposal, which suggests burying the site without removing the waste. The company didn't reply to DW's multiple requests for comment.

Dr Borrego explained that Fertiberia's blueprint doesn't take into account the effect of climate change and ignores the stability issues posed by the nature of the site. In addition, he pointed, Huelva is a seismic area regularly hit by powerful earthquakes and tsunamis. On average, there's a tsunami roughly every 400 years (the last one was triggered in 1755 by the Lisbon earthquake).

The company has simulated the effect of tsunamis over the dams. However, according to Dr. Borrego, the company is too optimistic. "They have only modeled a relatively small, 2-meter-high wave, and have only thought of its direct impact, and not the undercurrent, which would drag the mud in the bottom, causing, again, a collapse of the whole structure," he said.

In 1998, 7,000 tons of ashes from a steel smelter were dumped on the site, and buried under 1.5 meters of earth. In 2007 CRIIRAD, a French independent laboratory specialized in radioactive analysis, studied the area, confirming that it was polluted with radioactive Cesium 137 from the steel ashes. But, according to their report, they found more: "The site contains [...] different kinds of residues, including Ilmenite [...], spilled there without control, without an isolation layer below them." 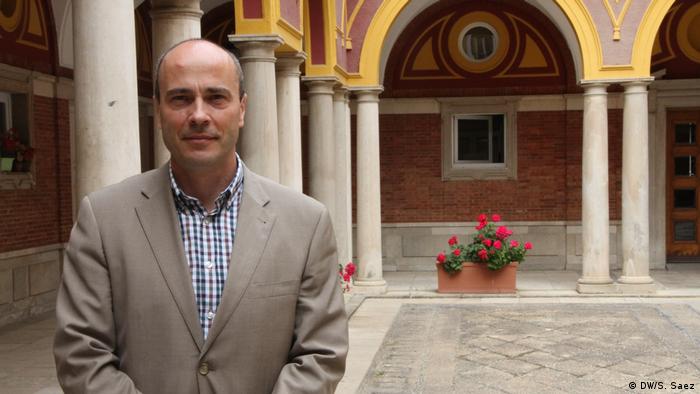 Rafael Gavilan is a councilman at the Huelva City Hall. His party Mesa de la Ría, focuses on fighting Huelva's polluting industry: "There's not only phosphogypsum in the dams. There was a time where anyone could dump just about anything there, including the local and regional authorities," he told DW.

For all the years he's been fighting the toxic dams, Gavilán is more confident than ever. Most political parties, the scientific community and a large majority of the citizens are now against the waste. Only the Ministry of Environment, led by a former top officer of the company (Isabel García Tejerina), stands with Fertiberia. He's confident that there is, finally, a chance to get the phosphogypsum out of Huelva.

"We started this fight alone and now, everyone is in our camp. Am I optimistic? Yes, I am. When everyone wants something, ruling against it is quite hard," he says with a smile.

The financial crisis that began in 2008 obliterated millions of jobs in Spain. In the wake of the meltdown, around half of those under 30 are still unable to find a job. Santiago Saez reports from Madrid and Huelva. (29.12.2016)