Karl Marx-themed mugs, stickers, magnets and pens do well at the tourism office in the German city of Trier. But a new item, released earlier this year to mark the philosopher's 200th birthday, is the really big hit. 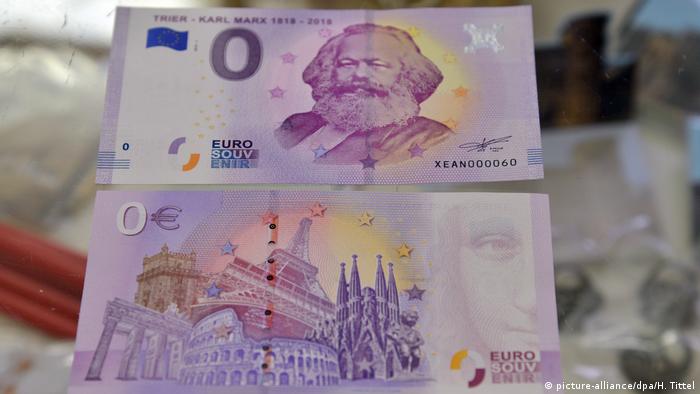 More than 100,000 'zero euro' bills printed with the image of capitalism critic Karl Marx have been sold since the souvenir was introduced in commemoration of the German philosopher's 200th birthday, says Hans-Albert Becker of the Trier tourism bureau, in western Germany.

And tourists from all over the world have been snapping them up, in Trier and online, Becker told Germany's dpa press agency, adding that the bill has surprisingly become a major seller. "We never expected the bills to be such a success."

The purple bank note looks and feels real: it has just about the right size, is printed on security paper, and has all the right security features, including a water mark, copper stripes, hologram, UV fluorescent ink and an individual serial number. Asians seem to be particularly taken by the fake bill, says Becker. "25,000 to 30,000 alone must have gone to China," he said.

Trier in a Marx frenzy

This year, it's all about Karl Marx, the famous author of Das Capital, also known as Capital, Critique of Political Economy, in his hometown Trier. Souvenirs with the image of a bearded Marx beckon at every corner, from t-shirts and posters to mugs, pens, books, posters and cookie cutters. Four museums have dedicated exhibitions to the city's famous son.

Is it possible to say from what we know today whether Marx's analysis of capitalism and his explanations of the economic machine are basically either correct or incorrect? (03.05.2018)