The Tour has a pursuit like no other as police try to find the spectator who caused a dramatic crash. The woman held a sign that read "Allez Opi-Omi!" before it struck Tony Martin, sending him and dozens more sprawling. 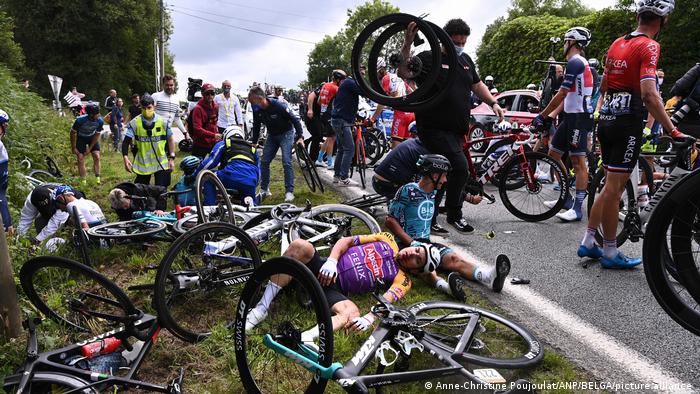 French police on Monday stepped up their search for the fan who caused a large crash on stage 1 of the Tour de France over the weekend.

Cyclist Tony Martin was the first to come across the woman who was brandishing a large cardboard sign which read "Allez Opi-Omi!" as a message to her grandparents while she stood on the side of the road.

The woman was so close to the road itself and with a sign so big that it encroached upon the race surface, thus the board struck Martin, sending the German tumbling, along with a large part of the Tour de France peloton.

A video recap from the Tour shows the moment the crash took place and the aftermath.

'This is not a circus,' says Martin

"I saw the lady, I saw the sign but there was no time to react," the captain of the Jumbo-Visma team said. "I still can't understand how people can do things like that. We're here to race our bikes — it's not a circus."

Requiring medical assistance, many of the cyclists were left strewn across the road in the wake of the crash that occurred 150 kilometers (93 miles) into Saturday's 198 kilometer stretch from from Brest to Landerneau.

Pursuit of a different kind

Race organizers are now intent on suing the spectator responsible for the accident amid further calls for fans to behave on the side of the road.

The woman, who will be investigated for endangering public safety, left the scene of the crash and hasn't been found since.

"The Landerneau police are investigating and we haven't heard back from them yet," Tour deputy director Pierre-Yves Thouault said after organizers ASO filed a lawsuit against the yet to be identified fan. "We are going to repeat our calls for fans to behave, through the police and our social network."

Meanwhile, bad luck struck Martin again on Monday, as he was caught in the melee following a crash involving 2018 Tour winner Geraint Thomas, with the Welshman hurting his shoulder in the process.

Grimacing, Thomas managed to continue, but lost several minutes as a result of his fall.

Martin and Dutchman Robert Gesink, who was also involved in the crash, were both able to remount their bikes and resume.

'Back to normal' is a catchphrase for Tour de France's this year — a limited number of spectators will be allowed at the track, without masks. Former world champion Peter Sagan is hoping to get up close to his fans.

Belo Horizonte is creating more space for cyclists and the community in the hopes of improving air quality and lowering CO2 emissions.