With a visit to Prato, Pope Francis, a champion for the rights of exploited workers, will likely draw attention once again to a sore spot on the Italian industrial landscape. Megan Williams reports from there. 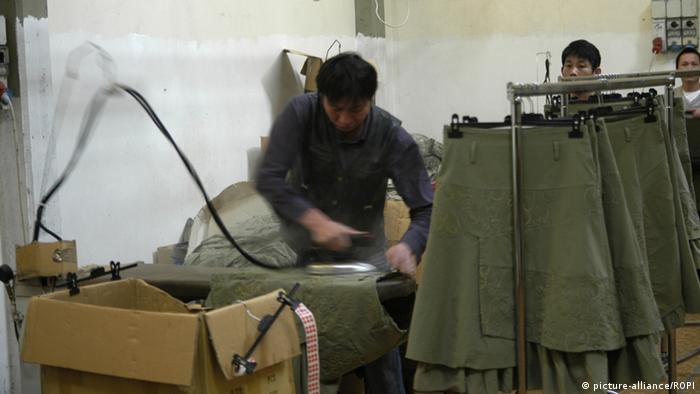 A few years ago, early one winter morning, I sat in the backseat of an Italian police cruiser as it headed to the outskirts of the industrial Tuscan town of Prato, along roads lined with dozens of low-rise brick factories known as capannoni, or small workshops.

Prato was once renowned as a world leader in the production of high quality wool textiles. In 2000, Prato exported $7-billion worth of textiles. Then came competition from countries with cheap labour: Eastern Europe, Africa, Bangladesh and, of course, China. Since then, more than half of its factories have gone under. The rest of Prato's wool textile companies moved their operations East to stay alive.

Rather than remain empty, however, a whole new business moved into the buildings: textile producers from China that largely operate as if basic safety and labor laws were an abstract notion from a foreign land. It's a practice local authorities have been trying to correct, with scarce results.

Indeed, the cruiser I was in that morning was on its way to raid one of the hundreds of Chinese sweat shops frenetically producing cheap apparel that Europeans have been more than happy to buy. 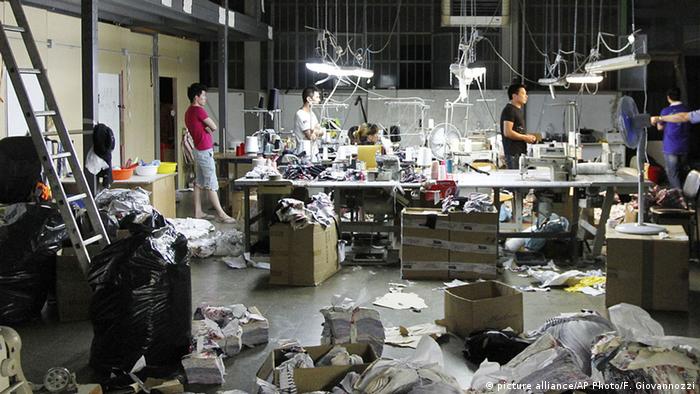 As the officers pushed through a side door in the factory, I followed them into a room the size of a small gymnasium crammed with rows of sewing machines and mounds of fabric scraps with any ray of natural light blocked by black plastic covering the windows. Sheets of plywood had been thrown up to make tiny make-shift bedrooms that lined the walls and formed a grimy bathroom and kitchen in one corner.

Twenty or so people, most in their 20s, emerged from the cubby-hole rooms, rubbing their eyes. They looked more irritably resigned than scared.

As police checked their documents - three of the 20 were in Italy illegally - the workers grudgingly stuffed garbage bags with everything from clothing and computers to woks and frozen food. The officers hammered shut the bedroom doors and wrapped thick plastic ties around the sewing machines. Without much more ado, the factory door was chained shut and the workers climbed into cars that suddenly appeared to carry them off to another workshop.

That raid was more than four years ago - one of 2,000 that authorities have carried out since early 2008. Roughly half the factories raided were shut down for safety and labor violations, though it's widely known the small operations simply move to another building and open up under a different name.

The last time the issue garnered national headlines was in late 2013 when an early morning blaze that tore through a cappanone took the lives of seven workers asleep in their plywood rooms.

The fire prompted authorities to intensify factory inspections and led to charges of homicide against five people, including two Italians who owned the building. An uncomfortable truth about the cappanoni is that most are still owned by Italians who gladly accept the rent, while turning a blind eye to what goes on inside their property.

Later, the Italian and Chinese justice ministers signed a memorandum of cooperation in fighting transnational organized crime. Despite the move, Franco Roberti, a national anti-mafia prosecutor, said the Chinese community in Prato was "very closed and difficult to penetrate," and until then, cooperation with Chinese authorities had been non-existent. 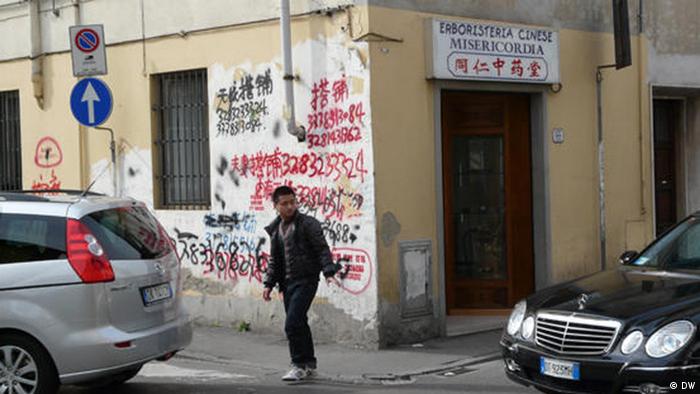 A Chinese 'sweat shop' in Prato, Italy, near Florence

Needless to say, the large presence of Chinese workers in Prato has heightened cultural, as well as legal tensions in the city. While it's difficult to know the exact number who live here, authorities estimate the Chinese, both legal and illegal inhabitants, constitute about 20 percent of the town's population of 191,000, making it the highest concentration of Chinese in Italy and one of the highest in Europe.

Tensions have arisen from everything from noise emanating from Chinese restaurants that tend to stay open later, to Italian resentment over Chinese business owners showing off their new wealth in expensive cars.

A Chinese voice in Prato

Marco Wong, a Chinese import-export entrepreneur who was born and raised in Italy, says when a conflict arises, it's often the Chinese who pay the price. He cites a recent street brawl between a group of Chinese and Italian men outside a Chinese restaurant.

"The authorities took the Italians' version as the truthful one and shortly after, they inspected the restaurant. A lot of the Chinese in Prato saw that as another sign of persecution."

Wong has done his best to give a political voice the Chinese in Prato, twice running - and losing - for City Council as a member of the leftist SEL party. The first time, six years ago, he got 24 votes; in last year's elections, he got 241.

He says the rise in votes for him partly dispels a common complaint about Chinese workers here - that they use Italian social services, don't pay taxes and then head back to China after a few years of work in Italy. 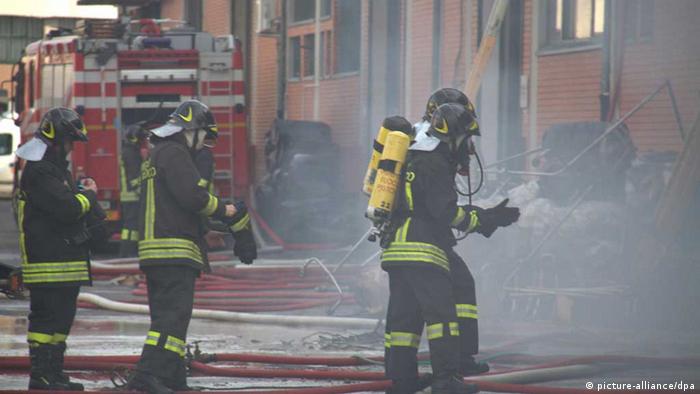 "There are now a lot more Italian citizens of Chinese origin. China doesn't recognize double citizenship, so it means these are people who have committed to staying in Italy."

On a communication level, Wong says tensions between the two communities have lessened under the administration of centre-left Mayor Matteo Biffoni.

He praised Biffoni for downplaying alarmism over the presence of Chinese prostitutes on Prato's streets on a popular investigative TV show. "We've known about Chinese prostitution in Prato for years now and we use the legal tools we have to deal with it," said Biffoni. "What worries us most are the people who are exploiting these women and we're trying to go after them."

Prato has also made strides in better integrating at least some of the Chinese businesses with its recent announcement by the Prato branch of the National Confederation for the Craft Sector and Small and Medium Enterprise of Italy to offer more support to legally registered Chinese-owned companies in everything from health and safety information to skill development.

But it will continue to be difficult to stop the tide of Chinese workers being smuggled to Italy from European countries or China - or the billions of untaxed euros funneled back to China. In part, that's because many of the workers hardly consider themselves exploited: they work the same long days they would back home, but earn 2 to 3 euros an hour - at least twice what they would in China.

When I was last in Prato, I spoke with 28-year-old garment worker Wei Dingwen. He said he worked seven days a week, 18 hours a day, earning about 40 euros a day. His entire first year's salary went to paying back his smugglers.

Then, with a smile, he told me he liked work. "Because work means money."

The impact of the coronavirus pandemic on Asia's textile manufacturers has been unprecedented. Plummeting sales, closed factories and lower wages are just some of the problems according to a new ILO report.

As Bangladesh marks its 50th Victory Day, experts note that it has transformed itself from an economic "basket case" into one of the world's fastest-growing economies.