′Topography of Terror′ opens on site of former Gestapo headquarters | Germany| News and in-depth reporting from Berlin and beyond | DW | 06.05.2010

'Topography of Terror' opens on site of former Gestapo headquarters

A new exhibition in Berlin aims to shed light on Nazi atrocities by taking visitors back to the very place where the crimes of Hitler's regime were planned. The 'Topography of Terror' opened on Thursday. 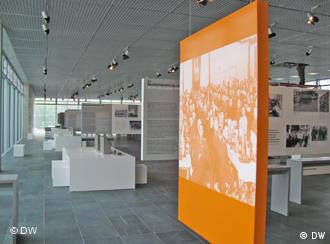 Thousands of exhibits inform visitors about the Nazi's center of evil

Following over two decades of building work, Berlin on Thursday saw the official reopening of a documentation center on the very compound that once housed Hitler's dreaded Gestapo police as well as the command of Nazi Germany's paramilitary unit, the SS. The new site – complete with a museum and a library – replaces an old, rather sparse, open-air exhibition which opened for the general public in 1987.

During the inauguration ceremony for the new center in downtown Berlin, German President Horst Koehler said it was important for people to remember where the Nazi atrocities, including their aggressive wars and the Holocaust, were planned.

"No other place is linked as much with the Nazi crimes as this one," Koehler said, referring to the compound which historians have come to call the "center of evil." "When we become aware of what the perpetrators did we realize that freedom, human rights, tolerance and democracy are values that should not be taken for granted," he added. 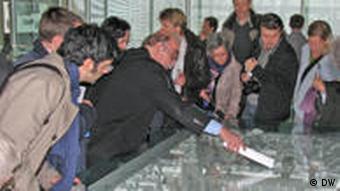 Museum director Andreas Nachama explains a model of the compound

The new documentation center called 'Topography of Terror' and housed in a single-story pavilion, is crammed full with exhibits that show in minute detail how Nazi leaders such as Heinrich Himmler or Reinhard Heydrich, among other things, planned the killing of six million Jews.

The 4.5-hectare site is a stone's throw away from the buildings of the federal parliament and that of the city state of Berlin's regional parliament. Most of it is overgrown with trees and shrubs, but it serves as a reminder to visitors of the thousands of victims that were tortured in the Gestapo's former prison there.

For the head of Berlin's Jewish community, Lala Suesskind, the completion of the exhibition center is a very important event. Such a memorial site was unthinkable before the late 1980s, as many Germans preferred to literally let the grass grow over the dark chapters of German history.

"Many, many years were like this, and believe me, this period is not yet completely over," Suesskind told Deutsche Welle. "In the Berlin of today, we probably have enough now in terms of buildings and monuments to remember the past. But there's not enough talk about the past yet, not enough debates."

Suesskind added that children born today had no idea about what Hitler Germany was like. The new permanent exhibition, she said, could help them understand more. 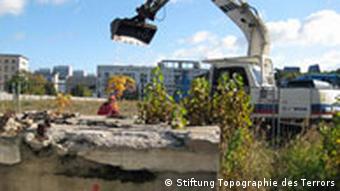 2007: A far cry from what the center looks like today

'Topography of Terror' director Andreas Nachama said the re-opening of the exhibition was like finally closing a wound that had scarred the city for so long.

"After all, it has been our intention to make sure that the generations to come will also be able to see the true character of the evil," Nachama argued.

Towards the end of World War II, the Nazi command buildings were razed in allied air-raids. Interest in the importance of the site only resurfaced in the 1980s. A makeshift open-air exhibition that was opened on the premises in 1987 attracted about half a million visitors in recent years.

The inauguration of the exhibition in place now was preceded by a series of planning errors, technical failures and above all exploding costs that the authorities were not willing to shoulder.

All in all, the new center in its final design cost about 26 million euros ($33 million) and is seen to be complementary to the city's central Holocaust memorial, which is just within eyesight.

But Andreas Nachama said it would be wrong to associate the evils of fascism too closely with the location itself.

"It is not the buildings that were evil, it was the people in them," he said.

At Dachau, German president warns about forgetting the past

Sixty-five years after the liberation of Dachau, President Horst Koehler has warned that the horrors of the Nazi era must never be forgotten. He attended a commemoration ceremony Sunday at the former concentration camp. (02.05.2010)

Former inmates of internment camps set up by the Soviets following World War II met with academics at Buchenwald on Saturday. Little was known about the Soviet camps until after the fall of the East German regime. (16.02.2010)