Top-earners in the Bundestag - now with more transparency | Germany| News and in-depth reporting from Berlin and beyond | DW | 05.08.2017

Top-earners in the Bundestag - now with more transparency

One in four representatives in Germany's Bundestag pad their already generous parliamentary allowances with lucrative side jobs. Does the extra income endanger parliamentary independence? 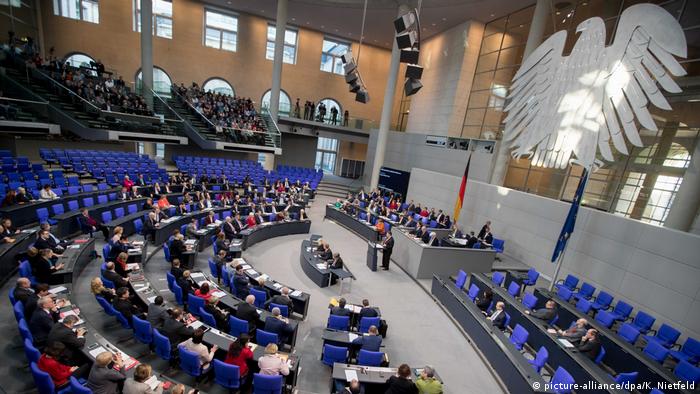 First the reassuring news: The majority of representatives in Germany's lower house of parliament, the Bundestag, do not earn in excess of 1,000 euros ($1,800) per month, or 10,000 euros annually from side jobs. And if they did, they would be required to declare that additional income. But one in four parliamentarians now in the Bundestag - 178 of a total of 630 representatives - currently earn more than that amount. Top earners, for instance, have seats on corporate advisory boards, continue to practice law or own agricultural enterprises.

A new study compiled by the Otto Brenner Foundation, in cooperation with the transparency initiative abgeordnetenwatch.de (English: representative watch) has calculated that those representatives earned anywhere between 26.5 and 48.7 million euros in income, on top of what they already earn as politicians. Those at the top of the list make their money with sugar beets, hog feed and biogas. 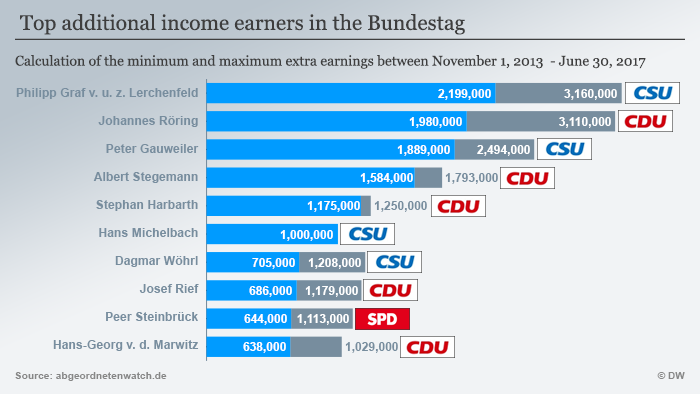 Parliamentarian and farmer Josef Rief (Christian Democratic Union/CDU), from Upper Swabia, feels discredited by the abgeordnetenwatch.de study. Parliamentary representatives are required to provide information on their annual revenue (which was the basis for the study) but not on actual profits. Rief says earnings from his pig breeding operation and 50 hectare (124 acre) farm, which are estimated to be worth anywhere between 686,000 and 1.1 million euros, are considerably less than the numbers suggest by the time he deducts personnel and material costs. "The most annual profit that I've made since entering the Bundestag in 2009 has been 11,000 euros," Rief told DW. In 2015 he actually filed a loss of 15,000 euros because grain and pork prices were so low. "The list is anything but serious. It is totally arbitrary."

Trained as a farmer, Rief ran his operation singlehandedly for 30 years. When he entered parliament, he hired a manager to run the operation. "I cannot give up my business because my children are too young to take it over. I could sell or lease it, but then I would lose my independence," he explains. If his party should decide to give someone else his seat, or if he were to lose an election, he says he will go back to farming full-time.

"No one can expect me to get rid of my business just because I have gone into politics," says CDU parliamentarian Hans-Georg von der Marwitz. He, too, operates a family business alongside his job in the Bundestag, adding, "I have to keep it running." The farmer and parliamentarian says he feels disadvantaged compared to other representatives. He says they do not incur personnel or material costs because they earn their money from speaking engagements, advisory positions or on boards of directors. 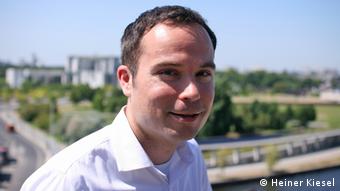 Accusations of a lack of transparency have dogged parliamentarians in Germany's Bundestag for years. When Social Democratic Party (SPD) parliamentarian, Peer Steinbrück, stood as his party's chancellor candidate in the 2013 federal elections, for instance, he attracted a lot of attention - incidentally, he is not running this year. Media reports at the time noted that in the previous legislative period, which had begun in 2009, Steinbrück had not only earned 1.25 million euros for speaking engagements and lectures - but that he also saw more than 500,000 euros in book sales profits and over 110,000 euros for his supervisory board mandate at German steel giant ThyssenKrupp.

As a result of this and other cases, the Bundestag introduced a modernized self-disclosure system in 2013. That system served as the basis for the Otto Brenner Foundation and abgeordnetenwatch.de study. Representatives are not required to give exact information as to their income, but rather as it pertains to ten different income classes. The lowest of these covers a range between 1,000 and 3,500 euros and the top tier covers anything over 250,000 euros.

From farmer to agricultural functionary

One thing that raised eyebrows for the study's authors was the fact that both Josef Rief and Hans-Georg von der Marwitz are members of the Bundestag's Food and Agriculture Committee. Georg Hackmack, co-founder and CEO of abgeordnetenwatch.de, says that such situations give him pause. "It is a problem when representatives, who are themselves farmers, sit on the Agricultural Committee and make decisions about subsidies from which their own business will profit," he told DW, adding that this is exactly how conflicts of interest arise.

Lobbying on the floor?

Additional income has always been the problem of a privileged few. According to the study, all of the big money makers, with the exception of Peer Steinbrück, come from the CDU and its sister party, the Christian Social Union (CSU) - a trend that has continued for years. 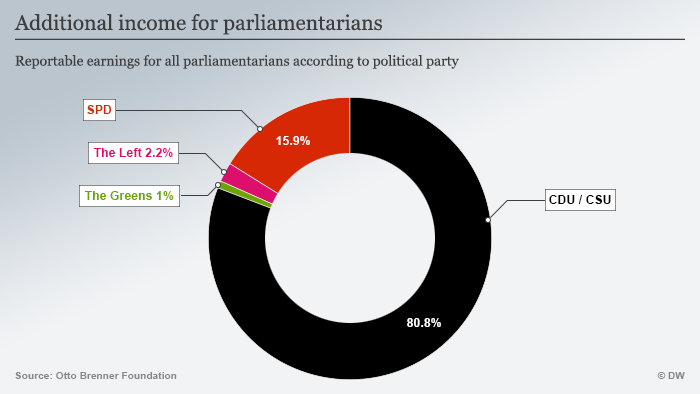 The theory that a seat in the Bundestag opens doors to new contacts and thus new income is also borne out in the study: SPD politicians, more than any others, often leave parliament with more side jobs than when they entered the body. "When representatives leave the Bundestag with more income than when they entered, that means that connections arose from them holding political positions," says Hackmack, adding: "They only gained that income because they were parliamentarians."

Without the introduction of the self-disclosure system in 2013, that tendency would not have been discernible. "That transparency has not led to parliamentarians limiting their additional activities," summarizes Hackmack. "But now we can more easily see that it is a major problem that must be dealt with." He adds that such additional income among parliamentarians could have been much more closely monitored in the past, and that it must be much more strictly regulated in the future.