Austria's highest court has ruled that the presidential election held in May must be repeated. The far-right Freedom Party whose candidate narrowly lost had claimed "massive irregularities" in the absentee vote. 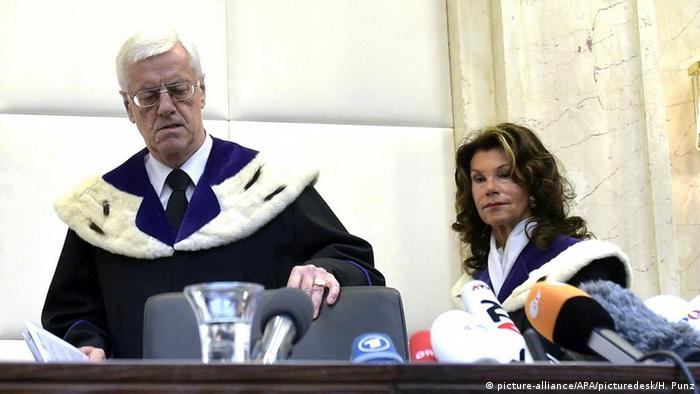 Austria's constitutional court annulled May's president election on Friday, upholding a legal challenge by the anti-immigration Freedom party (FPÖ) and opening the way for a repeat poll in September or October.

"The challenge brought by Freedom Party leader Heinz-Christian Strache against the May 22 election... has been upheld," said constitutional court head Gerhard Holzinger (pictured above).

The court said it was using its strict standard on the application of election rules and had no choice but to call for a re-run. 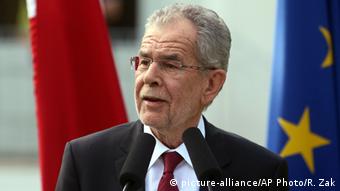 Van der Bellen was declared winner in May

There was no proof that May's count had been manipulated, but irregularities potentially affected nearly 78,000 votes, Holzinger said.

The decision "serves only to strengthen trust in our laws and our democracy," he added.

The final result of May's election - after a count of absentee ballots - had put former Green party politician Alexander Van der Bellen ahead by little more than 30,000 votes.

The margin of presumed victory was less than one percentage point - out of the 4.6 million ballots cast.

Norbert Hofer of the FPÖ had come top in the first round in April.

Preliminary results on the evening of the second round had given the 45-year-old trained aviation engineer a narrow lead. But, after some 700,000 postal votes were counted, Van der Bellen was declared the winner of the largely ceremonial post the next day.

The tight contest was viewed Europe-wide as a proxy fight pitting the continent's political center against its growingly strong populist and anti-establishment movements.

Friday's court ruling came a week after Britain narrowly voted in a referendum to leave the 28-nation European Union.

The Freedom Party, which was founded in the 1950s, filed its legal challenge on 8 June, arguing that electoral law had been contravened in one way or another in most of Austria's 117 electoral districts.

Giving testimony earlier this month, Innsbruck regional state electoral head Wolfgang Nairz said an "enormous amount" of postal ballots were processed early to deliver a result by a 9 a.m. deadline on the Monday morning after the election.

"No manipulation is in any way apparent and it [the count] was largely carried out correctly," Van der Bellen's lawyer Maria Windhager had told journalists during the testimony phase.

The inauguration of the 72-year-old economics professor had been scheduled for July 8.

Outgoing Social Democrat president Heinz Fischer is likely to be replaced on an interim basis by three parliamentary officials.