Tom Brady’s retirement: Will he, won't he?

The best quarterback in NFL history may have played his final game. A week after his Tampa Bay Buccaneers were eliminated, Tom Brady is reportedly ready to draw a line under a career full of records. 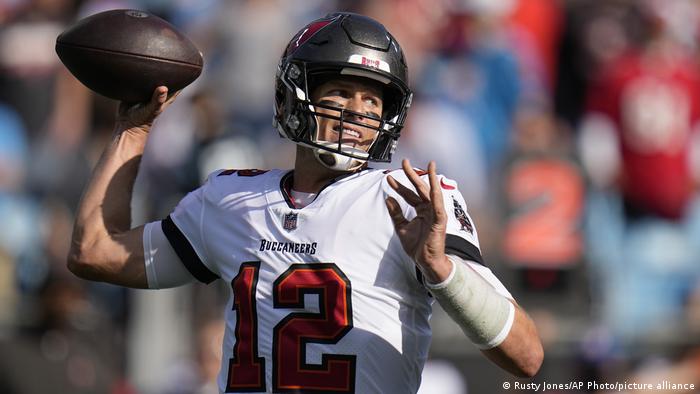 Tom Brady long-term future as a Hall of Famer is secured, his short-term future is more uncertain

Tom Brady's status as the 'GOAT' – the greatest of all time – goes unquestioned. The current status of a career set to land him in the NFL’s Hall of Fame, however, is up in the air.

The seven-time Super Bowl champion was eliminated last week with the Tampa Bay Buccaneers and initially left his future open. "I think I'll have to just, after every year, think about what the situation looks like for me, personally and professionally."

Now conflicting reports have left fans wondering whether the best quarterback in NFL history may have played his final game. .

Why is Brady the 'GOAT'?

The 44-year-old has played football in the NFL since 2000, first with the New England Patriots until 2019, with whom he won the Super Bowl six times. After that, the quarterback moved to Tampa and picked up his seventh ring in 2021.

He’s the only player to win more than five Super Bowls and was MVP of the season's showpiece event five times. If Brady does decide to hang up his cleats, the NFL will bid farewell to their all-time leader is several categories, including yards passed (84,520) and touchdowns thrown (624).

U.S. sports outlet ESPN were the first to report on Brady's impending departure, shortly thereafter the National Football League (NFL) also paid tribute to its figurehead. "GOAT," was the caption on the first of seven tweets highlighting the memories made.

Doubts later circulated, however, with several media outlets quoting Brady's father as saying that a final decision had not yet been made, a claim backed up by agent Don Yee. "I understand the advance speculation about Tom’s future," Yee told NFL Network’s Tom Pelissero.

"Without getting into the accuracy or inaccuracy of what’s being reported, Tom will be the only person to express his plan with complete accuracy. He knows the realities of the football business and planning calendar as well as anybody, so that should be soon."

In the regular season, the oldest quarterback in the league put up the best figures for touchdowns, successful passes, pass attempts and yards thrown. Even against the L.A. Rams he almost turned the game around despite a 27-3 second-half deficit.

According to ESPN though, Brady is making the move with his health, family and a possible rebuild of the Buccaneers' squad in mind.

"Obviously, I love playing; I don’t think my love will go away," Brady told the press after the loss to the Rams. "I think I’ll be able to do it, it’s just the other things are kind of happening in my life, in regard to family situations. My kids are not getting younger, and I want to make sure that they get what they need, too."

Brady has brought an extra sprinkling of class to the last few years of his career and proven that he can still compete at the highest level. Now the world waits on the NFL's all-time pass leader to bring the same level of accuracy to the reports of his retirement.