Japan's government has admitted that the crippled Fukushima nuclear plant is leaking some 300 tons of water daily into the Pacific Ocean. Prime Minister Shinzo Abe has hinted Tokyo will help foot the clean-up bill. 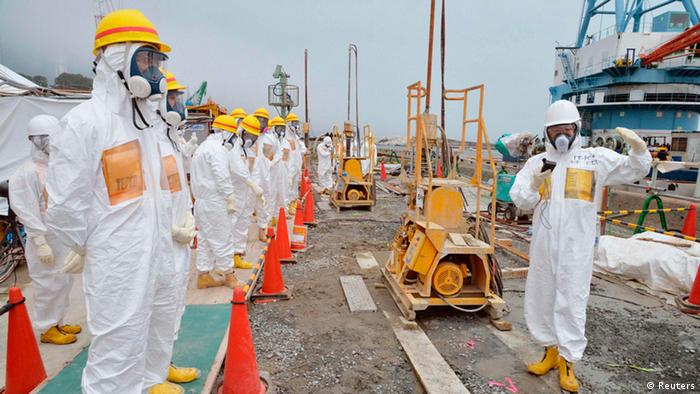 "The contaminated water problem is one that the Japanese people have a high level of interest in and is an urgent issue to deal with," Abe said after government task force officials met in Tokyo to review the disaster that began with a severe earthquake and tsunami in 2011.

"Rather than relying on Tokyo Electric (TEPCO), the government will take measures," he said.

Abe stopped short of pledging funds, but an economy ministry official said it had requested a budget allocation.

Abe's intervention follows an admission on Monday by a nuclear watchdog official to the news agency Reuters that water seepage had become an "emergency" that TEPCO had not contained.

On Wednesday, the Nikkei newspaper said public funds would be used to freeze the soil to prevent groundwater from leaking into the reactor buildings.

The projected cost was up to 307 million euros ($410 million). Similar technology is used worldwide during subway construction to avert flooding of worksites by groundwater.

As residents of the areas of Japan hardest-hit by the March 2011 earthquake and tsunami struggle to rebuild their lives, funds that were set aside to assist them are being siphoned off into unrelated projects. (05.06.2013)

The ministry official quoted by Reuters also said the government intended to reduce the leakage amount to 60 tons per day by as early as December.

Groundwater runs down from the hills above the nuclear facility and then seeps into the basements of the plants' buildings. The groundwater then mixes with highly irradiated water used to cool nuclear fuel, which melted down in three reactors in 2011.

Recent spikes of radioactive elements in sea water prompted TEPCO to admit last month that tainted water had also leaked outside – despite its efforts to build a groundwater "bypass."

"Right now there are no details (of the project yet). There's no blueprint, no nothing yet, so there's no way we can scrutinize it," said Shinji Kinjo, the head of the task force set up by Japan's nuclear regulator to deal with the toxic water issue.

Greenpeace on Tuesday said the leaks showed that TEPCO was "incapable of dealing with the disaster."

Large areas around the plant had to be evacuated, with tens of thousands of people still unable to return to their homes, leaving TEPCO facing hefty compensation claims from survivors.

Almost all of them have been shut since the disaster because of safety concerns, leaving Japan dependent on expensive imported fuels for virtually all its energy.

On 11 March 2011, tsunami waters engulfed the plant, unleashing the meltdowns. At other coastal sites, massive waves killed more than 18,000 people.