Toblerone bars are still produced exclusively in Switzerland, but the world-renowned chocolate brand is planning an expansion. Under Swiss law, this change comes with a price. 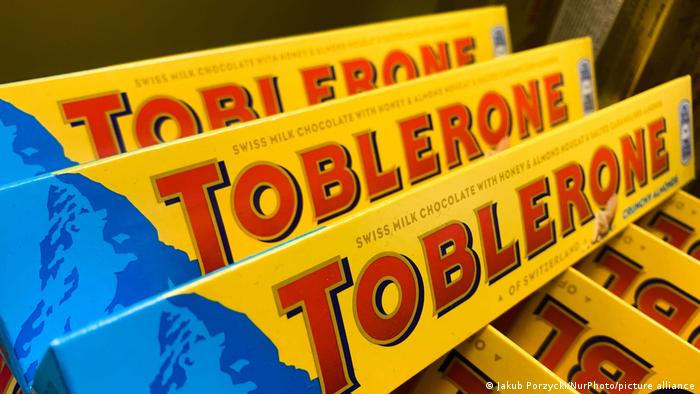 Toblerone has always used its 'Swissness' as a selling point

Toblerone is to lose the "of Switzerland" label from the front of its packaging after a decision to open a production site for the chocolate in Slovakia. The brand was established in 1908 in the Tobler family factory in Bern. The triangular chocolate — with a shape reminiscent of Swiss Alpine peaks — has been produced in the Swiss capital Bern ever since.

Why is it being made somewhere else?

Toblerone's owner, US confectionary giant Mondelez, says it's opening a new production line in the eastern European country "in response to growing demand."

The company told the AFP news agency it would continue to invest in the original Bern plant. It said the launch of a production line in Slovakia would also unlock significant capacity at the site in Bern. Mondolez already makes Milka and Suchard chocolates in Slovakia.

Mondelez said the move would eventually allow it to "manufacture millions of additional bars."

However, the fact that it will no longer be produced exclusively in Switzerland means that, under Swiss law, Toblerone can no longer describe itself as Swiss.

The company says it will change the wording on its packaging well in advance of the production shift from 2023. The new design will simply say that Toblerone originated in Switzerland.

Toblerone produces 7 billion chocolate bars a year, with 97% of production being exported to 120 countries. It is commonly seen at airport duty-free shops all over the world.

The even triangular shape of the Matterhorn in the Swiss and Italian Alps is believed to have provided Theodor Tobler with the inspiration for the product's shape. A bear, which is the symbol of Bern, is also depicted on the Toblerone logo.

The Tobler company was independent for decades but eventually merged with Suchard and was bought in 1990 by Kraft Foods. It became part of Mondelez in 2012.

Size changes that removed peaks from the 400 gram and 170 gram bars, thus reducing their weight, caused ire in the United Kingdom in 2016. One Scottish Parliament lawmaker called for "government action" to be taken.

Toblerone has been made outside Switzerland previously for extended periods, in the UK and the former Yugoslavia. A similar version is still made, under the product name Kolumbo, in the Croatian factory that produced it previously.