Tobacco industry challenges Thai government | Asia| An in-depth look at news from across the continent | DW | 14.10.2013

The Thai Public Health Ministry is embroiled in a court battle with international tobacco companies as it seeks to impose larger graphic health warnings on cigarette packages. 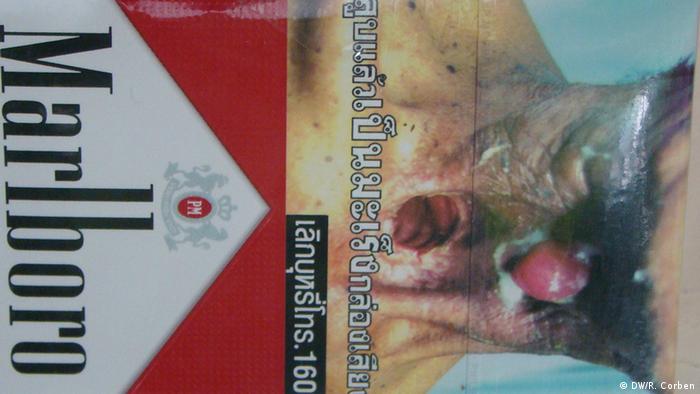 The Thai Public Health Ministry had planned to introduce a regulation requiring the warnings on cigarette packs to be increased from 55 percent to 85 percent of the packaging, starting October 2 this year.

But the major international tobacco companies led by global giant Philip Morris brought a halt to the policy with an Administrative Court injunction leaving both parties now to argue their case and a judgement likely some months away.

"In the history of the Ministry of Public Health and the big tobacco companies in Thailand, there has never been a case of the ministry having to defend itself in court," Professor Pokpong told DW.

He said in the past when new regulations were introduced by the ministry, the tobacco companies, after some debate, "but never in court," would adopt the new measures.

But this time it was different. "Just now, just this case with the 85 percent pictorial health warning, the three big companies sued the Ministry of Public Health. (This is the first) case ... in the history of tobacco control in Thailand," he said. 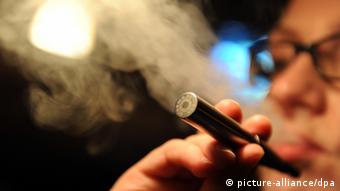 Thai health authorities say the tougher measures are out of concern over rising cancer rates, especially lung cancer in men.

But the tobacco industry's challenge, led by Philip Morris, claimed the regulation was "not only illegal, but also unnecessary, given that the health risks of smoking are universally known in Thailand."

The company also said the ministry had exceeded its power and had failed to consult thousands of retailers and manufacturers. The regulation, it said, also impaired the ability of manufacturers and importers to use their trademarks to differentiate their products.

The tougher regulations by Thailand are in line with World Health Organization (WHO) recommendations and adopting the WHO's Framework Convention on Tobacco Control (FCTC).

Under the convention, the WHO recommends warning labels with a minimum of 30 percent coverage on the cigarette packs, but that they "should be 50 percent or more" for greater effect.

Dr. Prakit Vachesatogkit, an advisor to the tobacco control division at the Ministry of Public Health says the ministry supports the WHO recommendations of increasing the size of the graphics. "If you increase the effect of the warning and then you take away the area the tobacco industry can use for advertising. So many countries are moving in that direction - three years ago, Uruguay adopted 80 percent warning coverage and then Australia did," Prakit told DW.

Australia successfully saw off challenges by the tobacco companies by requiring cigarette packs to be completely plain.

Prakit says the Australian policy led to a two to three percent reduction in cigarette consumption, in contrast to the 0.5 percent decline reported in annual consumption before the new packaging was introduced. But he acknowledges other measures, such as mass media campaigns and restrictions on cigarette smoking, also had an impact.

The legal tussle in Thailand comes as members of the European Parliament agreed to the adoption of warnings on cigarette packs and a phasing out of menthol flavoured cigarettes. 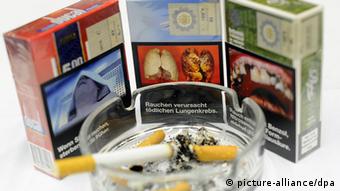 However, the European Parliament scaled back health warning coverage to 65 percent, the level suggested by the tobacco industry, rather than the 75 percent initially recommended.

The European parliamentarians also rejected plans to ban slim cigarettes and delayed a phasing out of menthol cigarettes to one of eight years rather than an earlier recommended three-year period.

The measures in Europe were seen as a victory by the tobacco lobby which was reported to have spent heavily in the campaign to weaken the regulations.

Jonathan Liberman, an Australian lawyer and technical expert on anti-tobacco legislation, says governments need to stand up to the pressure from the tobacco companies. "Countries have to defend these measures against legal claims and threats that are brought by the tobacco industry.

"It's a reflection of the nature of this industry that it tries to intimidate governments and sue them rather than just allow them to implement the measures that will reduce death and disease and the enormous social economic costs. The governments can't be intimidated - there's too much at stake."