To cut, or not to cut? The never-ending debate around circumcision | News and current affairs from Germany and around the world | DW | 07.05.2017

To cut, or not to cut? The never-ending debate around circumcision

Today is the "Worldwide Day of Genital Autonomy" and many people are demonstrating against the circumcision of young boys. Their arguments are serious – but so are those who are in favor of the practice. 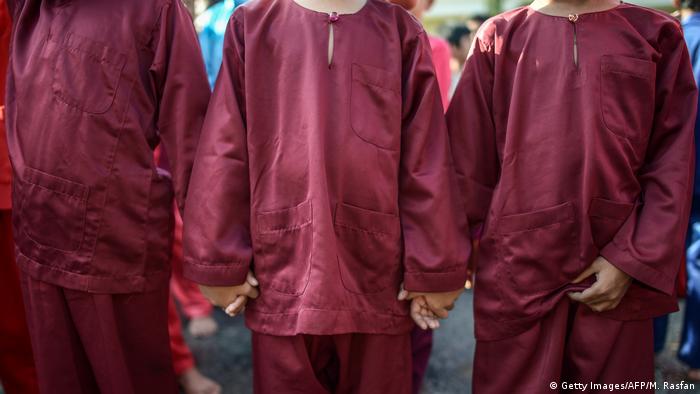 In Eastern Uganda and parts of Western Kenya, circumcising teenage boys is a practice carried out every two years and is performed as a sign of the community's unity. (24.08.2016)

A Norwegian proposal to offer male circumcision in public hospitals has encountered fierce opposition from medics and children’s organizations, even though the procedure affects less than one percent of boys in Norway. (30.04.2014)

A year ago Germany, after a long and heated debate, passed a controversial new circumcision law. It was meant to be a Solomonic solution, but critics say that the new rules do not guarantee children's well-being. (12.12.2013)

In May 2012, the Cologne District Court handed down a controversial decision: Circumcision, the complete removal of the male foreskin, the court said, is a form of bodily injury. As such, it is not in the best interest of children, and cannot be justified by parents' religious motivation.

The verdict was roundly criticized, especially by Jewish and Muslim associations. Both Judaism and Islam consider circumcision to be a requisite religious act: Muslims see it as an expression of religious inclusion, Jews argue that it is through circumcision that one enters a covenant with God.

Representatives of both religions voiced strong opinions about the verdict. If circumcision were outlawed in Germany, then Jews would be pushed into illegality, "And ultimately Jewish life here would become impossible," said Dieter Graumann, then chairman of the Central Council of Jews in Germany. The Central Council of Muslims in Germany saw the decision as a "blatant and improper intrusion on the self-determination of religious communities and the rights of parents."

In December 2012, Germany's parliament, the Bundestag, passed a law declaring the legality of male circumcision on religious grounds so long as the operation was carried out by a doctor or trained circumciser. Critics, however, argued that the Bundestag's decision was at odds with equality laws in the German constitution, as female circumcision is not allowed under any circumstances.

Since 2013, the 7th of May – the day the Cologne decision was handed down – has been observed as the "Worldwide Day of Genital Autonomy." It was initiated by circumcised persons along with the Professional Organization of Pediatricians (BVKJ); and MOGiS e.V, which is made up of victims of sexual abuse; the women's rights group "Terre des Femmes" and numerous other organizations. Demonstrations and events highlighting the genital self-determination of minors are regularly held on this day. 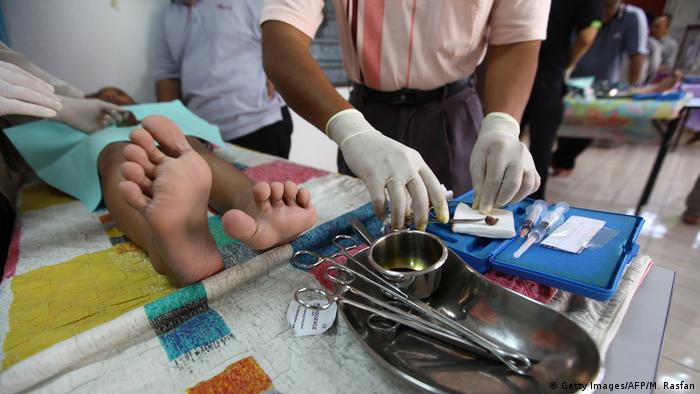 An operation performed as part of a mass circumcision ceremony in Malaysia, 2011.

The right to physical integrity

Proponents of genital autonomy argue that minors are denied the right to self-determination. They argue that male children and youths are generally not asked if they want to be circumcised. They see the fact that parents make the decision to circumcise without consulting their children as graver still since the procedure has irreversible consequences: The foreskin, a highly sensitive part of the body, never regenerates. "Due to its scope, the decision about non-therapeutic surgical operations on a person's genitalia should only be made by the person that will have to live with the consequences of that operation," says MOGiS Chairman Christian Bahls.

Circumcision critics say that in making such decisions, parents are acting against their children's right to bodily integrity – and with that, against their best interests. One of Germany's most prominent critics of the circumcision of minors is the lawyer Holm Putzke, who teaches at the University of Passau. Putzke told the German news magazine "Focus": "Removing a highly sensitive and erogenous part of a child's body without any medical indication for the need thereof, is not in the child's best interest. Especially considering the pain and unnecessary risks it subjects them to, and the fact that the operation has absolutely no health advantages for the child."

That opinion is not one that is subscribed to by all lawyers, however. They criticize Putzke's implicit assessment that medical indication – for instance, an extreme case of phimosis (narrowing of the foreskin) – is the measure by which to evaluate whether a circumcision need be performed. Hans-Jürgen Papier, former president of Germany's Federal Constitutional Court, says that the Cologne decision was inappropriate. He argues that the verdict does not adequately regard the right to religious freedom, which is an essential basic right, "that right is fundamentally unconditional and must be guaranteed without restrictions." Moreover, it affects parents' basic right of exercising parental care, which also includes the right to religious child-rearing.

Circumcision, says Papier, is not only "a question of tradition or ritual," but rather, an "essential aspect of faith." The constitutional lawyer says the procedure's impact on physical integrity is "marginal" when measured against the legal weight of the issue.

Those in favor of prohibiting circumcision risk accusations of proposing a totalitarian form of secularism. Indeed, their argumentation totally ignores the needs of religious people. It sets secular views above religious views.

The faithful, on the other hand, refer to a four-thousand-year-old monotheistic tradition, the roots of which likely stem from prehistoric times. Circumcision opponents, they say, base their judgments solely upon the definition of people as biological organisms. Those supporting genital self-determination leave no room for confessional arguments in their opposition to circumcision. The problem is that a purely biological interpretation of human existence is just as impossible to justify as one based primarily upon human existence from a religious point of view.

Mothers and fathers that have their offspring circumcised can hardly be accused of completely ignoring their children's well-being. In fact, quite the opposite is the case: As those parents see it, their faith and its rites, and thus religious identity, are central to the lifelong happiness of their progeny. Critics reply that parents do not ask their sons if they share that same concept of happiness. 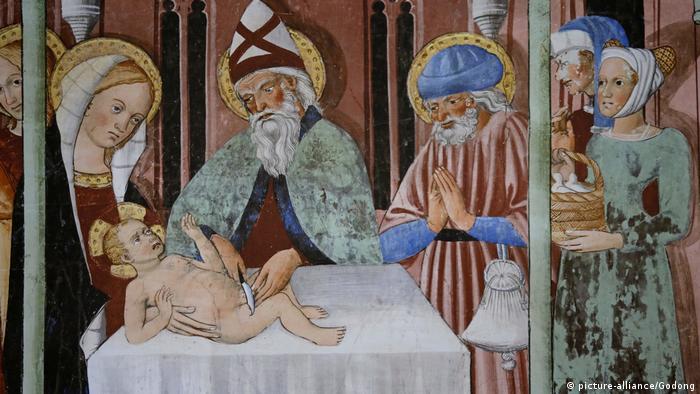 An image of the circumcision of the Christ Child from the 15th century.

Viewed from a philosophical perspective, it would seem that children are at the mercy of their parents' will. Immanuel Kant spoke of "the dictate of birth" in that regard. Philosopher Ludger Lütkehaus says that is exactly why parents have the responsibility to enable their children to mature. "In all forms of the exercise of parental power, especially in questions of religion, it is the obligation of those that give life to restrict as much as possible their heteronomy over their children, and to be as open as possible to their future autonomy."

The question, however, is whether religiously bound parents recognize the integration of their children into a religious faith as "external determination." If they do not, it would suggest that they see one particular faith as the only possible choice for their child. If that is the case, they, too, risk facing accusations of maintaining a fundamentalist worldview. Further, such an attitude would contradict one of the central values of Western modernism: Pluralism. The only problem is that there is no ultimate justification for that either.

This means that neither the decision for, nor against circumcision can ever be based on any ultimate justification. The only option, it would seem, is to practice the art of tolerance.