Anger and hatred are intense human feelings, yet these negative emotions are clearly shaping our current social interactions to an ever greater extent  — conspiracy theories, extremist terrorism and violent hate speech have become commonplace.

The exhibition "Time for Outrage! Art in Times of Social Anger" at the Kunstpalast museum in Düsseldorf is a response to the "social upheavals of our time," said Kunstpalast director Felix Krämer.

The showcased works by 35 clearly political artists and art activists illustrate and reflect on notions of anger in our challenging times.

The exhibits reflect art as a political space, said curator Linda Peitz, adding that the artists urge "solidarity, empathy and humanism, who point out, analyze or ironically break down the injustices in our society." 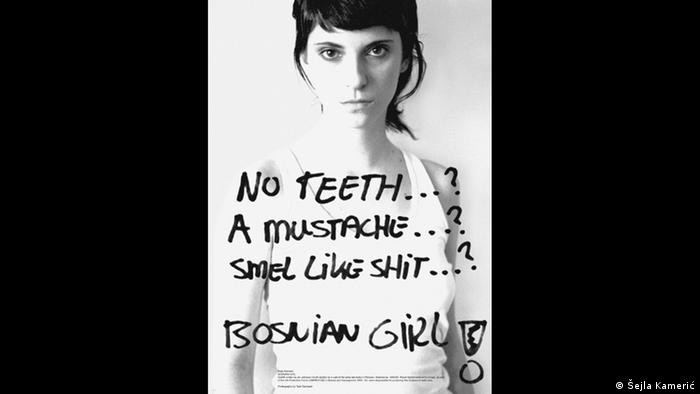 The inscription over the artist's photo is a quote from graffiti

'Outrage does not equal hatred'

This also reveals an implicit but important distinction between hate and anger on the one hand, and outrage and rage on the other. While anger is undirected, indignation and rage refer to concrete events. The suspense that marks the exhibition is founded on this semantic difference.

Particularly impressive: a work by the Bosnian artist Sejla Kameric, originally conceived as a poster but wallpapered on a 12-meter high wall in Düsseldorf. It shows the artist and the words of a Dutch NATO soldier, who in 1994 or 1995 wrote on a barracks wall in the village of Potocari near Srebrenica: "No teeth? A moustache? Smells like shit? Bosnian girl!"

Kameric reminds us of the war in former Yugoslavia and the genocide of thousands of Bosnians in Srebrenica but she also links the soldier's cruel graffito with her portrait, which makes it more personal. In the photo she looks straight at the visitors, forcing them to evaluate the work.

Many of the exhibits, for the most part photographs, video installations and films, work along those lines. What initially comes across as more of a documentary form helps juxtapose the two defining levels of the exhibition — hate and, as a result, outrage. The audience must draw its own conclusions from these juxtapositions.

At times, it is perspective that forces the viewer to take on an active role, for instance in Signe Pierce and Alli Coates' experimental setups.

What is private, what is political?

Yoshinori Niwa, a conceptual artist from Japan, set up a container in front of the musem where people can get rid of Nazi memorabilia. Ads in the local newspaper urged citizens to participate in the project named "Withdrawing Hitler from a private space" and to drop off any such artifacts so they can be destroyed at the end of the exhibition. 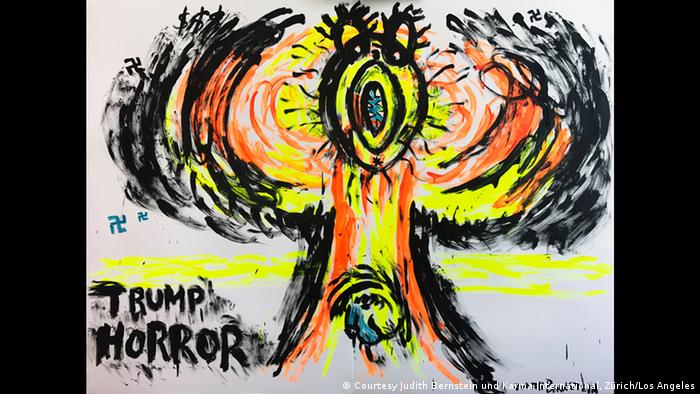 A video by French artist Kader Attia also focuses on how private becomes political if you have the 'wrong' origin. In "The Body's Legacies Pt. 2: The Post-Colonial Body," he interviews descendants of colonized people and slaves, showing how colonial violence and racism still influence the perception of the body and the behavior of people in public space today.

It is no coincidence that the title of the exhibition refers to the title of a well-known essay published in 2010 by the late Stephane Hessel, a French essayist and political activist who was a resistance fighter in the Nazi era. The exhibition echoes issues that were pressing even then, including the meaning of human rights, how we treat refugees and social inequality.

The show that was a year and a half in the making is surprisingly topical, and the coronavirus pandemic has even worsened many of the global injustices addressed. In recent months in particular, conspiracy theorists have dangerously often misappropriated his words. To a degree, the exhibition corrects the discourse by looking at overarching issues that have long been toxic, while also recapturing Hessel's basic ideas behind his call for outrage.

This article has been adapted from German by Dagmar Breitenbach

An exhibition at Dusseldorf's Kunstpalast features multimedia works reflecting on social expressions of anger and rage amid current political challenges.