He was jailed in 2019 for wildlife crimes and a murder-for-hire plot against animal rights activist Carole Baskin. The resentencing marks a reduction of one year from his original sentence. 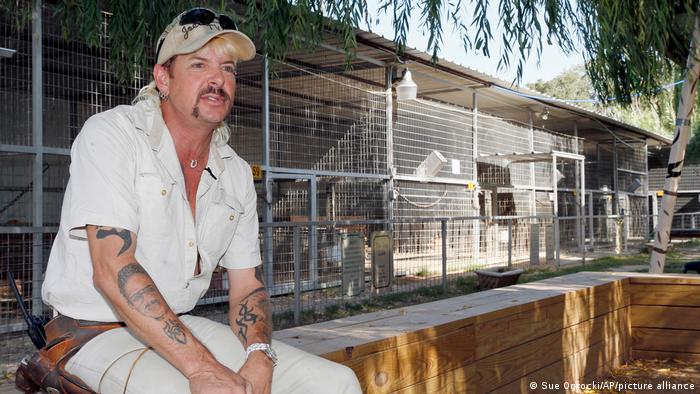 A federal judge resentenced "Tiger King'' Joe Exotic to 21 years in prison on Friday, reducing his punishment by just a year, for a murder-for-hire plot against animal rights activist Carole Baskin.

The sentence comes despite pleas from the former zookeeper for leniency as he begins treatment for cancer.

"Please don't make me die in prison waiting for a chance to be free,'' he told a federal judge who resentenced him. He announced in November that he had been diagnosed with stage one prostate cancer

Both Baskin and Joe Exotic, whose real name is Joseph Maldonado-Passage, were featured in the Netflix series "Tiger King: Murder, Mayhem and Madness."

Maldonado-Passage was convicted in 2019 on 21 crimes, including two for hiring hitmen to kill Baskin, and 19 counts of wildlife crimes. A judge sentenced him to 22 years in prison in 2020, but later claimed that there were errors made in court.

"He continues to harbor intense feelings of ill will toward me,'' she said. Supporters also showed up to the courtroom, wearing animal-print masks and shirts that read "Free Joe Exotic." His lawyers said they would appeal both the resentencing and petition for a new trial.

A three-judge panel of the 10th US Circuit Court of Appeals agreed with Maldonado-Passage that the court should have treated them as one conviction at sentencing because they both involved the same goal of killing Baskin, who runs a rescue sanctuary for big cats in Florida and had openly criticized the "Tiger King's" treatment of animals.

Maldonado-Passage was found guilty of offering $10,000 to an undercover FBI agent to kill Baskin in December 2017. In the recorded meeting, he told the agent, "Just, like, follow her into a mall parking lot and just cap her and drive off." His attorneys have argued that he wasn't being serious.

The additional counts of mistreatment of animals include a conviction for killing five tigers, selling tiger cubs and falsifying wildlife records.