Tibet′s PM-in-exile says China can′t be a great power without morality | Asia| An in-depth look at news from across the continent | DW | 24.11.2011

Tibet's first elected prime minister-in-exile was sworn in last August. On his first official trip to Europe, Lobsang Sangay is trying to garner support for real autonomy. Deutsche Welle spoke to him in Berlin. 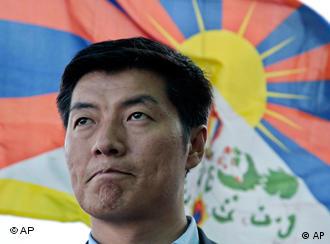 Lobsang Sangay was wearing a suit for his interview with Deutsche Welle, not a red monk's robe. The prime minister of the Tibetan Government in Exile has never set foot on Tibetan soil. He was born in India and later studied at Harvard where he is currently a senior fellow. He speaks for all Tibetans, in exile and in China.

Since his election in April, he has largely done the same as the Dalai Lama - going around the world to garner support for the Tibetans' peaceful struggle for more autonomy. This is a struggle that has recently caught the world's attention again because of a wave of self-immolations. 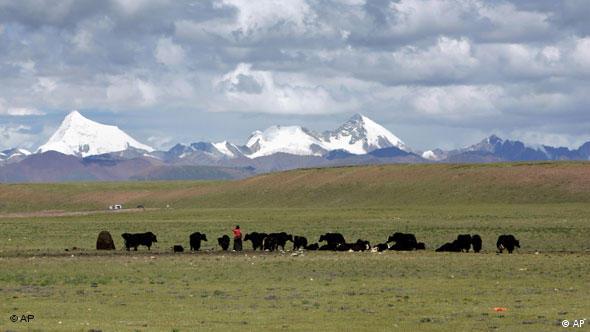 Lobsang Sangay has never set foot in Tibet, the land of yaks

In his interview, Sangay said these self-immolations were an act of despair committed by desperate people and that they were in reaction to the repressive policies of the Chinese government. However, "we do not encourage anybody to choose this form of protest," he insisted. "Life is very valuable," he said and pointed out that the Dalai Lama had also spoken out against them.

"The self-immolations are a sign of hopelessness because many Tibetans believe that the world is no longer interested in their fate," he said, adding that any sign of support from famous people or governments was important. He said such support could once again create hope.

But time is not on the side of the Tibetans. China's influence is growing and exiled Tibetans have less and less room for maneuver. Lobsang Sangay said he was very disappointed that South Africa had refused the Dalai Lama an entry visa in October to attend Nobel laureate Desmond Tutu's birthday celebrations. "A friend of the greatest South African leader, who worked so hard for democracy and Nelson Mandela's release, refuses him entry. That makes me very sad."

He said he had nothing against doing business with China but that one should not throw all one's principles overboard. 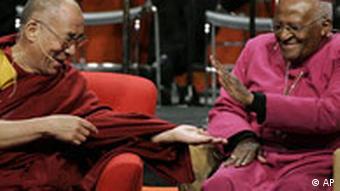 This year, the Dalai Lama did not get to celebrate Desmond Tutu's birthday with him

In the past 50 years, Lobsang Sangay explained, Tibet has invested in non-violence, democracy and dialogue. If the Tibetans are dropped the message sent out to others struggling for autonomy will be devastating - that violence does not pay.

Lobsang Sangay pointed out that it would be in China's own interest to help Tibet find a "middle way" for autonomy within a Chinese state structure. He even said this would work with the current Chinese constitution. "The 'one country, two systems' model is already practiced in Hong Kong and Macau. Beijing even seems willing to grant Taiwan more autonomy," he said but added that this was perhaps because Chinese people live there, whereas Beijing is wary of Tibetans.

Generally, he said that China's moral authority in the world hinged upon it finding a solution to the Tibetan question. Without morality, Beijing will be feared perhaps but it won't be respected, he said, and yet this is intrinsic to great power status.

Germany calls on China to act against self-immolations over Tibet

There is rising concern about a spate of self-immolations among Tibetans monks and nuns protesting against Beijing's policies in Tibet. Germany and the US have called on China to respect religious and cultural identity. (21.10.2011)

Tibetan nun dies after setting herself on fire

In China monks have been setting themselves on fire to draw attention to the Tibetan cause. Most recently, a Buddhist nun has died after self-immolating. She is the first woman known to have done so in the region. (18.10.2011)

Lobsang Sangay, a Harvard-educated lawyer, took the oath at a ceremony presided over by the Dalai Lama, who remains the Tibetans' spiritual leader. Sangay is the first Tibetan born in exile to hold such a high office. (08.08.2011)