Tens of thousands of Poles have protested after lawmakers in the lower house passed a law handing control of the country's Supreme Court to politicians. The bill still has to pass the upper house.

Crowds of demonstrators took to the streets of the Polish capital, Warsaw, on Thursday evening after lawmakers in the lower house of parliament voted through a controversial reform of the Supreme Court proposed by the ruling Law and Justice Party (PiS).

Organizers said some 50,000 people participated in protests outside the presidential palace, although police spoke of 14,000. The demonstrators called on President Andrzej Duda to veto the legislation, which gives the government more influence on the appointment of judges to the Supreme Court.

The PiS-controlled lower house of parliament voted 235 to 192 to pass the bill, with 23 abstentions. It still needs to pass the upper house, which is also controlled by the PiS, and be signed by Duda. A Senate commission was expected to approve it on Friday.

Duda, who is closely allied with the PiS, refused a meeting with European Council president Donald Tusk, who had expressed concern over the situation, he announced on Thursday.

Tusk released a statement after the vote again requesting a meeting with Duda. He said Poland risked being marginalized by the EU because its moves went against European values.

The bill has drawn condemnation from the European Union and led to several street protests in recent weeks.

The new law grants the president the power to influence the court's work and to appoint its judges. It also calls for the immediate dismissal of the court's current judges, except those chosen by the president.

"The adoption of this reform violates the principles of the rule of law because it subjects the judiciary to political power. This paves the way for a non-democratic system in Poland," political analyst Stanislaw Mocek of the Polish Academy of Sciences told news agency AFP.

"The situation is very serious and could get out of hand. We don't see a will for compromise on the part of PiS, and the opposition is too weak," he said. 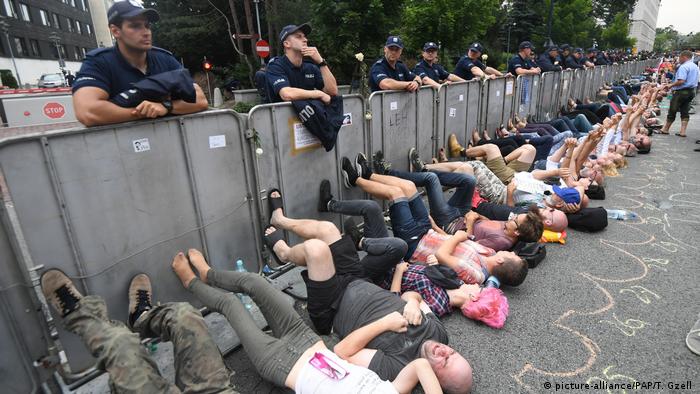 The EU had warned Poland that if it passed the laws, it could be sanctioned and have its voting rights suspended in the Council of Ministers, a top EU decision-making body.

"Recent measures taken by the Polish authorities on the judicial system greatly amplify the threat to the rule of law in Poland," European Commission Vice President Frans Timmermans said on Wednesday.

He said he could be close to triggering Article 7, a never-before-used sanction against EU members who violate fundamental rights.

Since being elected to power in 2015, the PiS party has sought to expand its influence over the courts and media, prompting the EU to launch a review of the rule of law in Poland last year.

Malgorzata Kidawa-Blonska, the former Chairman of the Sejm (lower house), condemned the vote on Twitter on Thursday. "Members of the PiS raised their hands to deprive citizens of the right to free courts," she wrote.

Wenzel Michalski‏, the German Director of Human Rights Watch, said the bill would mean an end to the independence of the judiciary in Poland.