Thousands Protest Against ″Fortress Europe″ in Paris | Europe | News and current affairs from around the continent | DW | 19.10.2008

Several thousand people took to the streets of France's capital to protest against sweeping new immigration guidelines agreed by EU leaders as the British government warned of tougher entry restrictions. 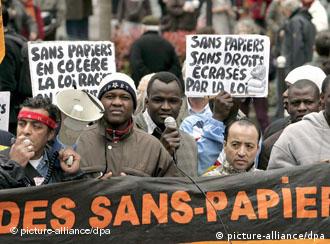 The streets of Paris were filled with protestors

Immigration as an economic issue is exercising governments across Europe with unemployment set to rise as recession threatens in the fallout from the global financial crisis.

French demonstrators unfurled a banner proclaiming "Bridges, not walls" at the Paris rally. Other signs that read: "We are all immigrant children" and "Detention centers are lawless places, a state secret."

In Le Mans, central France, a 60-year-old woman doused herself in flammable liquid in front of a detention centre and set herself on fire in protest at authorities' threats to deport her partner back to Armenia.

The Paris rally along with a 'citizens summit' was organized by some 300 international NGOs, many of them from African nations. Its organizers adopted a declaration Friday evening expressing their dismay at a policy "which would turn Europe into a fortress." 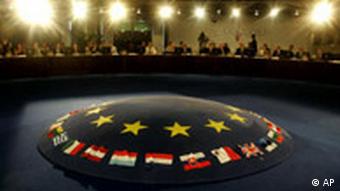 Adopted Thursday by leaders of the 27-member European Union, the European Pact on Immigration and Asylum -- a document of political intent but not binding laws -- sets out principles for managing migration, fighting illegal immigration and forming partnerships with countries people leave or travel through to get to Europe.

It also seeks to make border controls more effective while building better asylum policy, with refugees increasingly obliged to apply for asylum status from outside the bloc.

Britain's new immigration minister has already promised to impose tougher restrictions as the country's unemployment rate looks set to soar to its highest level in nearly a decade.

"It's been too easy to get into this country in the past and it's going to get harder," Phil Woolas told The Times newspaper in an interview published Saturday.

In a dramatic change of policy, the Labour government intends to place a limit on immigration, according to the daily.

The minister said his government would not allow Britain's population to grow to 70 million people.

Britain's population grew by about 3.4 percent to almost 61 million people between 2001 and 2007 fuelled by expansion of the European Union, according to latest figures from the Office for National Statistics.

Britain's unemployment rate jumped to an eight-year high of 5.7 percent in the three months to August, official data showed on Wednesday.

The 5.7-percent unemployment rate was the highest since the three months to March, 2000.

The European Union's interior ministers agreed Thursday on common principles guiding the way member states manage the influx of non-EU nationals. But a Blue Card scheme for skilled migrants is still on hold. (25.09.2008)

France to Push for Tougher Measures Against Illegal Immigrants

As part of its EU presidency, France is planning to present on Monday plans for combating illegal immigration in the 27-member-block despite criticism and accusations of xenophobia. (06.07.2008)