Thousands of Iraqis protest on 'Day of Wrath'

Encouraged by the events in the neighboring Arab countries, thousands of Iraqis were protesting in cities across Iraq on their 'Day of wrath.' They're fed up with corruption and want better living conditions. 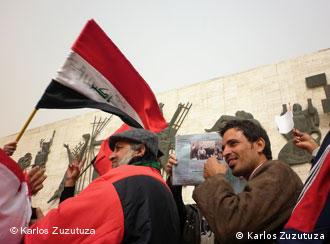 The protesters are determined to stay the course

Nine people were reported killed and dozens injured in clashes between protesters and security forces in several cities across Iraq as protests kicked off Friday.

Thousands of demonstrators gathered in Baghdad and other cities to take part in what has been dubbed the "Revolution of Iraqi Rage."

The protests that had started peacefully last week have turned increasingly violent. One man died and other eight others were injured after an attack Monday by an alleged pro-government militia on a group of demonstrators trying to spend the night at Baghdad's Tahrir square.

"They came an hour after the midnight curfew. It was a group of around 60, most of them teenagers, armed with knives and clubs. They all jumped of from hummers belonging to the Interior Ministry," a witness, who just wanted to be called "Istivan," told Deutsche Welle.

Bassam Abdul Sattar, another witness, added that Ministry of Defence vehicles cordoning off the area "had left a few minutes before" the attackers arrived.

The protesters are demanding economic reforms, more jobs and an end to corruption. "We'll sleep in Tahrir Square until our demands are met. It's been already eight years since Saddam's fall but we've hardly seen any meaningful reconstruction in the country yet," Kemal Jabar, one of the organizers, told Deutsche Welle.

Religious leaders, including Shia cleric Abdulgaith Al Hassan, have also joined the protesters. In a telephone conversation from an undisclosed location, Al Hassan told Deutsche Welle that the eight injured were being treated at their houses because they feared harassment by the Interior Ministry's security forces if they were taken to hospital. 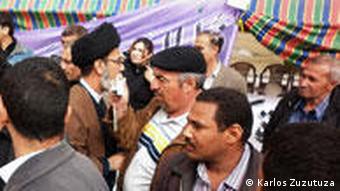 Bashar Mandalawy, a reporter from the Kurdistan-based AKNews agency, complained to Deutsche Welle that the police and the army were "choosing who could broadcast live from Tahrir square while other journalists where prevented from doing their job".

Protesters also said that they had been gathering outside the Iranian Embassy in previous days to express their concern about "the increasing interference from the neighboring country", yet another factor adding to the discontent felt about the lack of basic infrastructures and the rampant government corruption.

"I am Shia but I'm Iraqi, not Iranian. We do not want an Islamic Republic like in neighboring Iran. Today we are gathering Shiites, Sunnis Christians ... We all share the same problems because we all live in the same country," said Akram, another demonstrator in Tahrir square.

'We want electricity, water and jobs'

"Our neighbourhood stinks because of sewage problems. Whenever it rains the roads become an infectious quagmire and we have to improvise bridges with stones and wooden boards not to plunge into the ponds of feces," complained Ayad Hashem, a resident of Baghdad's Husseiniya district. He added that he often had to cope with just three hours of electricity a day, and sometimes none.

In addition to the slogans denouncing the lack of basic infrastructures and corruption, demonstrators have also protested at the police brutality against several peaceful marches throughout the country, especially in the north. The Kurdish Autonomous Region - Iraq's most stable district by and large - is witnessing unprecedented episodes of violence these days. Despite official sources reporting just one casualty in Sulaimania, unofficial reports say there have been "more than 10" after the police shot at protesters last weekend in the northern Kurdish city. 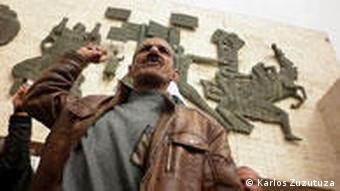 Baghdad's Paradise Square has also been a meeting point for several marches during the last weeks. Hundreds of people have gathered by the pedestal from which the statue of Saddam was toppled in 2003 in protest at the expropriation of property by the government. "No to state terrorism," was the most recurrent slogan.

And there are also those who have lost property in a much more violent way but yet have not dared to get to say it "too publicly." Robert, an Armenian Christian from Baghdad, did not hesitate to directly accuse the mayor of Baghdad of being behind the recent wave of attacks on shops selling alcohol.

"They want us to believe that it´s all about radical militias but we all know that they are being hired by the municipality. In the last three weeks they have destroyed five stores with permission to sell alcoholic beverages. They kill us and destroy our only way of living because they want us Christians to leave the country," he told Deutsche Welle.

"Saddam´s portraits in the streets have been replaced by those of the Shia leaders, both spiritual and political. I don´t know which is worse, corruption or the increasing religious fanaticism that is spreading across the country," complained a street seller at the bazaar in Baghdad´s Tahrir square.

Red alert in the 'Green Zone'

Amid the increasing number of revolts throughout the country, Iraqi Prime Minister Nuri Al Maliki has already promised higher salaries and a reduction of his own by half. There have also been talks to compensate the Iraqi citizens with 15.000 dinars (10 euros) each month for the shortages on their food ration cards.

Leyla Hassan, a member of parliament for Kirkuk district, believes that the echoes of the protests in Iraq may ultimately affect the Americans' decision to pull out their last troops by the end of this year.

"If the tension keeps growing, Obama will think twice before fully withdrawing from Iraq," she told Deutsche Welle. When asked about the increasing demands for change and reforms, Galal Lawrani, secretary of the Iraqi Parliament's deputy spokesman, pleaded for patience and understanding.

"We fight against corruption although we do admit that much of the money is lost in the hands of subcontractors. However, people do not understand that there's very little we can do as these companies are often linked to senior politicians. An intervention could lead to a government crisis almost immediately."

As international attention focuses on Libya and Bahrain, pro-reform protests are increasing in Iraq. DW asked a leading media expert whether the Domino effect has reached this country struggling to recover from war. (18.02.2011)

The protests in Tunis and Cairo showed that the democracy movement can bring about political change. DW's Jamsheed Faroughi says Iran's opposition can learn from its counterparts in the Arab world. (15.02.2011)