Iran backs change in Egypt but fears uprising of its own | World | Breaking news and perspectives from around the globe | DW | 04.02.2011

The geostrategic benefits of having a new, friendlier government in Egypt have prompted Iran to offer its support to anti-government protestors but the possibility of the wave of unrest hitting Tehran is causing concern. 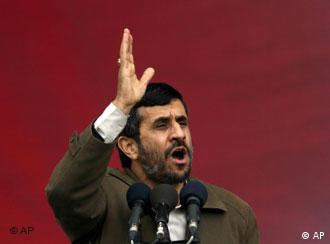 As the bloody battle for control of Egypt continues, many world powers are still walking a fine line between maintaining links with President Hosni Mubarak and supporting the rights of the protesters who are fighting to bring his 30-year reign to an end. The common position of most is to urge both sides to show restraint and to allow free speech and democracy to determine the future of Egypt.

However, true to form, after a series of muted and cryptic statements, one country has come out firmly on the side of the protestors: Iran - the only country in the region that does not have diplomatic relations with Egypt.

Eralier this week, the Iranian Foreign Ministry released a number of statements praising the popular anti-government uprising and has pledged its support for movements intent on removing "puppet autocratic regimes."

Claiming the uprising was the beginning of an "Islamic renaissance in the Middle East," the ministry said that Iran hoped that the protests would empower nations in the region to "stand up" to its enemies, Israel and the United States.

Iran has accused the United States and Israel of meddling in Egypt and of stifling the popular movement intent on removing Mubarak. It called for "world leaders and peoples to harshly reject US and Israeli interference aimed to deflect the fight for justice in Egypt," adding that any opposition to the Egyptian popular movement will cause "the ire of people throughout the world, especially Muslims." 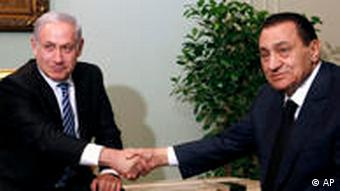 Egypt's peace deal with Israel has rankled with Iran

It is unsurprising that Iran has taken this position given the opposition Mubarak has maintained against the Islamic Republic throughout his decades in power; Egypt has opposed Iran's nuclear program, signed peace accords with its arch-enemy Israel and has actively hindered Iran's covert attempts to arm Hamas militants in Gaza by clamping down on weapons smuggling across its borders.

Mubarak's opposition has fostered a mutual suspicion and distrust in Tehran, one that has allegedly prompted Iran to actively seek his removal in the past.

While there has yet to be any firm evidence to support claims that Iran has had a hand in the recent protests, a 2009 US embassy cable released through WikiLeaks claimed that Mubarak was convinced that Iran was promoting the destabilization of Egypt through Hezbollah cells and the Muslim Brotherhood.

Analysts believe that Iran has a geostrategic interest in the unrest in Egypt as the fall of the secular, pro-Western Mubarak regime would severely weaken its main rival in the region and perhaps lead to a more hard-line, Tehran-friendly Islamic ruler taking power.

However, Dr. Walter Posch, an Iran Expert at the German Institute for International and Security Affairs, believes that Iran's hopes for a united Islamic front with a new Egyptian leadership are unrealistic. 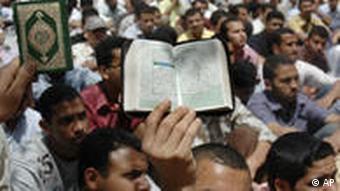 The Muslim Brotherhood is unlikely to play ball with Iran

"Should Islamists take over, they will certainly not do Tehran's bidding as we have already seen with Islamist groups in Iraq and elsewhere," he told Deutsche Welle. "Strong countries where Islamists rule, like Turkey, even became formidable competitors for Tehran, and this will certainly happen with Egypt too if the Muslim Brotherhood should dominate the political outcome - which is far from assured."

"Even the Muslim Brotherhood has said it will honor the most important point in regional politics: the Israeli-Egyptian peace agreement," he added.

Others say that Iran's main hope is that a new leadership would not be so reliant on US support.

"The hope in Iran is that the leadership that replaces Mubarak is one which is independent from the United States and one with a strong Islamic element would be even more ideal," Paul Freiherr von Maltzahn, the former German ambassador to Egypt and current executive vice president of the German Council on Foreign Relations (DGAP), told Deutsche Welle.

"However, I am of the opinion that it is unlikely that this leadership will include the Muslim Brotherhood and I agree with the general belief that even if the Brotherhood were included in a new government, they would not be favorable toward Iranian interests."

Despite this possibility, Iran's Islamic leaders, including Ayatollah Khatami, are still hoping the unrest seen in Egypt - as well as that which led to the overthrow of Tunisian President Zine al-Abidine Ben Ali - will usher in a new era of Islamic rule in the wider region that "withstands the Zionist occupiers" - the name Tehran has given Israel, a country it will not acknowledge.

While the fall of the Mubarak regime may be a positive result for Iran for many reasons, including the possible encircling of Israel by unfriendly states, the regime in Tehran is also harboring a number of its own concerns. 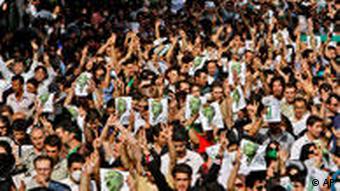 Iran's own protests in 2009 were brutally put down

Iran's domestic opposition movement, which took to the streets in 2009 to protest the disputed re-election of President Mahmoud Ahmadinejad, is also supporting the uprising in Egypt. While the regime and the opposition, led by Mir Hossein Mousavi, both appear to be identifying with the protestors, there are two competing narratives.

While the regime sees the chance for an arch-rival to be overthrown, Mousavi and his supporters see the "people power" in Tunis and Cairo as an encouraging development for their own movement and hope that the unease created by the uprisings could prompt the hard-line rulers in Tehran to allow greater freedoms in Iran.

Mousavi has pointed out that the grievances which prompted the 2009 mass protest movement in Iran, which was violently crushed by the state's Revolutionary Guards, are the same as those which have fired the protests in Tunisia, Egypt, Yemen, Algeria and Jordan.

"Beneath the surface Tehran looks more soberly at the protests," Dr. Posch said. "The lack of any Islamic message in the protests and the irrelevance of Islamist organizations in Tunis and Cairo in organizing the protests, the fact that anti-imperialism was not the key factor, the insistence on good governance and civility shows that political dynamics in the region have reached a level where foreign bogeymen are irrelevant - which is a dramatic brake of political culture in the Middle East."

"In fact Tunis and Cairo 2011 have more in common with the protesters in Tehran 2009 where the urban middle class made its voice heard in favor of good governance, transparency, the rule of law and human rights."

However, von Maltzahn believes Iran's history and culture of protest makes a similar uprising almost impossible to imagine in the Islamic Republic.

"There is of course the chance that there could be a spark in Iran that leads to new protests and the regime is concerned about this."

"However, the problem in Iran is that the middle class who took to the streets in 2009 have long and very bad memories, not only of the suppression of two years ago but going back to the 1979 revolution. This is a traumatic memory for many in Iran and as such there is little or no possibility of similar protests attempting to take down the Iranian regime."

West cranks up rhetoric as Iran's opposition regroups and refocuses

The West has returned to its default setting of pressurizing Iran with bellicose rhetoric and threats over its nuclear plans. In Iran, however, positive change may still be in the hands of the country's opposition. (25.03.2010)